NASA photo shows evidence of an ancient military that had familiar weapons with this anti-aircraft gun facing upwards still. Mars Atmosphere is bad.

NASA has taken first place "yet again" for the total lack of decency and common sense in telling the public what they have found.

And they also get first place for ignoring people who have legitimate questions about Mars' past based on their own evidence.

Paranormal Crucible has created a great video featuring this amazing Anti-aircraft gun or Tank gun with turet which suggests that if it was on a Tank then it got blew completely off or it's from the factory, and I'm talking probably so far back in history that it's hard to imagine because it's Eroded so much. 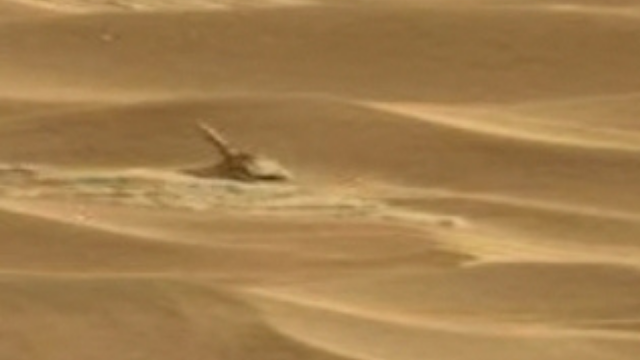 Okay, let's go down the route of this being a totally innocent rock formation and let's say that it's just a pure chance and a coincidence that it's eroded in such a way that this rock's inner core was stronger than the outside rock which has blown away over time. What's the chances that it's in the shape of a gun facing upwards.

Mars rock normally stretches out far and looks like a barren landscape in most photos which NASA has taken over the last decade or so. The amount of unusual things that are in these NASA photos are off the charts. At the last count, I gave up because it was a stupid endeavour because I found out the hard way that it's limitless. I lost count and it's right across the board. Alphabetically it's endless, bullet points it's never ending, highlighted - they seem to go on forever.

How can I count something that continues to evolve, gets added to and has more than one way of looking at it especially with people arguing over what it is and what it's not? It would take a group of people at least an unknown number of months maybe even years to go through every single NASA Mars photo because there's millions and millions of Mars photos and if we want an accurate number it would take a common census on the answer of what's been studied.

Getting back to the anomaly in question, Mars hasn't been civilised for a very long time but it's been long enough since then that a fair few things have stood the test of time and held onto their original shape. Mars Atmosphere is quite different from Earth and that's because of the gasses in it's atmosphere. Some gasses accelerate erosion and some are so corrosive that over time nothing is left.

Martian soil is toxic, due to relatively high concentrations of perchlorate compounds containing chlorine. ... The NASA Phoenix lander first detected chlorine-based compounds such as calcium perchlorate. The levels detected in the Martian soil are around 0.5%, which is a level considered toxic to humans.

Please leave your comment on what you think this is and give us your opinions, cheers.