This is the moment when we see a Cigar shape UFO fly across the sky of the eye witness home. It was caught on cctv and it's as clear as can be seen.

This is exceptional UFO news and it's only from a few month's back in California on home CCTV.

It's one of the clearest Cigar shape UFOs that I've ever seen and that takes some doing as I've been writing about UFOs and Cigar shape UFOs for well over a decade so I've written about a fair few UFO incidents in my time let me tell you!

Check this out, it's the CCTV Cigar shape UFO video description:

YouTube user Donald Sanders has uploaded a short, 40 second clip of footage taken from what appears to be a home security camera.

The camera seems to point outwards from a front porch with a clear view of the street outside and the sky above.

Here's a snap shot of the Cigar shape UFO passing by the eye witnesses home CCTV in the night dark sky and it's as clear as the day is long.

The image below is absolutely fantastic and by far the best UFO speeding past a person's home, caught on CCTV and with such clear details. It's in other words, the Bee's knee's in all it's brilliance. 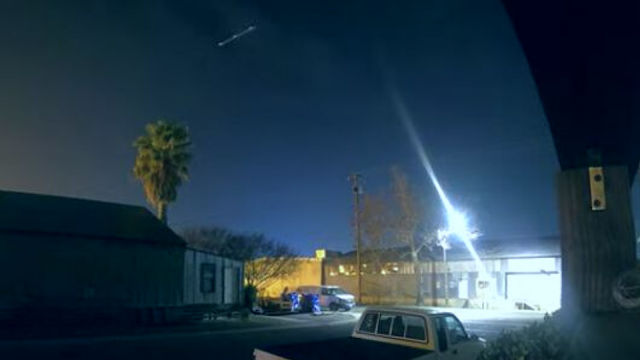 Below I've zoomed in while trying to keep the UFO in as clear details as possible, this is exactly why we have so many blurred UFO photos you know.

It's because people start out with a clear UFO photographed far off but they want to get a good enough thumbnail for YouTube or a blog post and as we all know, the more you zoom in on anything it loses pixels, hence the blurred UFO photos. 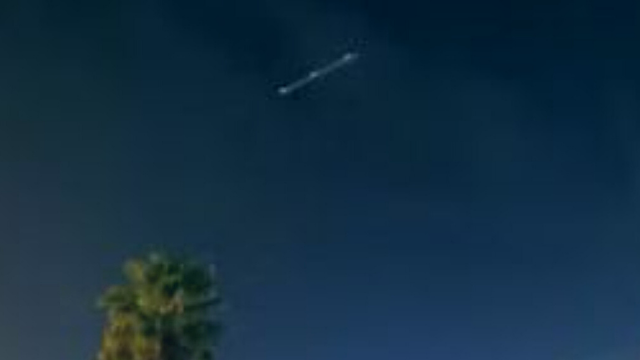 I'm still not sure if CCTV or NASA’s own UFO footage should be classed as "better standard of UFO footage" than that of eye witnesses filming it out in the street so to speak? Just because CCTV is left to record what it sees it doesn't mean that someone can't edit the video to suit their own needs like editing into the video a UFO.

NASA is supposed to be squeaky clean though and we're supposed to take them at their word, but we now know that they've been aware of the UAP presence and more UFO incidents but when asked by journalists they denied any knowledge of the UAP videos and that's made me question their whole integrity!

I can't and won't believe them ever again because when an agency like NASA is held in such high regard and esteem that when they're caught up in breaking that confidence it's so much devastating than say a friend doing the same thing.

That's why I've lost all confidence in NASA’s hunt for Extraterrestrial entities. There were people opposed to declassifying of the UAP videos right from the get go involved with NASA and the DoD. I've read this post recently and it is eye opening for many reasons but just read this quick quote from NBC:

The U.S. government can't explain 143 of the 144 cases of unidentified flying objects reported by military planes, according to a highly anticipated intelligence report released Friday.

That report, released by the Office of the Director of National Intelligence, was meant to shed light on the mystery of those dozens of flying objects, spotted from 2004 to 2021, but instead said it didn't have adequate data to put all but one of them into a category.

Here's the video that was uploaded by Latest UFO Sightings YouTube channel: