This is the best Alien UFO I've seen over Western Australia. It's a strange type of UFO that doesn't look like a craft or a normal type of craft.

The UFO here is the strangest shape that you're probably ever going to see and that's "ever" in exclamation marks.

After been contacted by the eye witness who filmed this UFO, I swear that it rang a bell because I'm sure I've seen another one just like this or something similar. I've tried to find it via Googly but not I've not been successful yet. It's a definite UFO, it's just hovering there at a distance of about 1 or 2 kilometres away. I'm not sure if it's above a town or buildings but as it's Australia it could be over vast empty fields. It's in the sky over Grt Southern Region of West Australia on the 3sst October 2020.

The part of the letters UFO I'm concerned about is the "Object bit" as it could be something other than a solid object. I suppose it is what it is, right? It can't be smoke as it's in a pattern which eventually moves away.

Here's a quote from the eye witness:

I just wanted someone to see it!

It was on Oct 31st 2020. It was in the Grt Southern Region in West Aussie. I was working with my horses and looked up and thought What the Hell is that!!!! Seriously, my phone was already flat (almost) and I thought it will switch off before I can get it, so I took the photo first then tried my luck with a video.

I got that much and yea it's a bit fumble. It was just stationary. I noticed later the car driving in the 80km zone going very slow at the bottom of the screen. I quickly opened my ute (truck) door cause I had a ciggy charger and lead, I plugged the phone in and jumped out and nothing! It was gone. Im guessing it was 1 or 2 km away. I've never seen anything like it before or since. So that's it really. 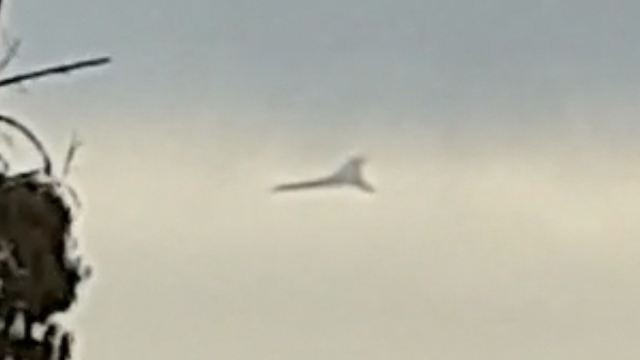 It's so different to the point where it completely does look Alien and doesn't look like anything else we have, here on Earth and plus it'd be the last shape you'd think of.

It's definitely not smoke in the sky or an airplanes exhaust. It's not contrails or a local wild fire giving off loads of smoke. 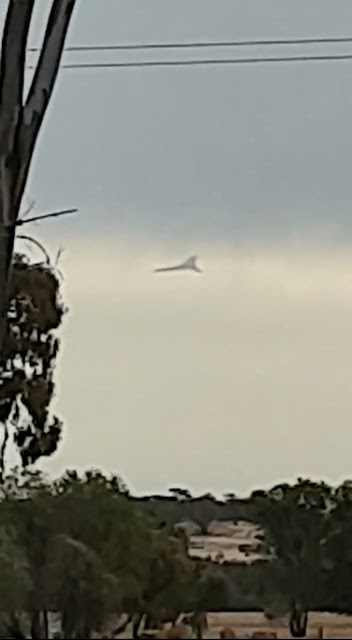 Figuring this out might never happen but we've got to give it a go. Somebody out there might know more about it or might know of a phenomenon in the region caused by certain conditions in the atmosphere? If you can shed any light on it for sure please let us all know in the comments, thanks.

Australia is the land of beauty and endless dreams which has recently become a major UFO hotspot in fact it's true about everywhere on the planet at the moment and not just Australia. But that's for another post, another day. The shape of this UFO is different because it's just so big. It's dark and has a eerie look to it. It almost has a fidget spinner look to it. You know them annoying thing's that people who are giving up smoking constantly fidget with in their hands!

I don't know what a UFO like this could be doing in Australia, but if I had to hazard a guess I'd say that it's maybe surveillance or something to do with the hundreds of thousands of UFO Orbs Filmed all the time around the world. It might be a Mothership, but a man made craft isn't the answer as ours aren't quite as big as this one.

I'm going to open it up to you all, please post your thoughts and let's hope we can get to the bottom of this brilliant UFO sighting.

I've been given permission to use the UFO photo's and the UFO video by the owner of the UFO media but they wish to remain anonymous and I fully intend to stick to my word.

Here's the full video, although it's a short one: