This UFO encounter either happened over the ocean near Alicante or it happened just off the coast of Australia? Fishermen witness Jet UFO chase.

This is probably the best and most interesting UFO sighting that was ever caught on camera all because a fisherman and his crew was in the right place at the right time. 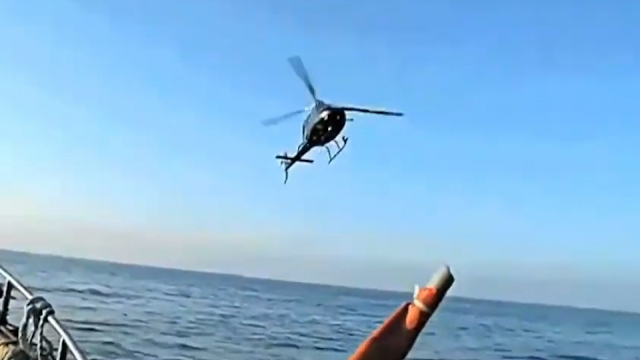 This helicopter is definitely threatening the crew on the fishing boat. It's speaking over a tanoy type megaspeaker system and I believe it's Spanish, anyone speaking Spanish please let us all know what is being said? It's the actions of the UFO turns USO which I'm interested in though. 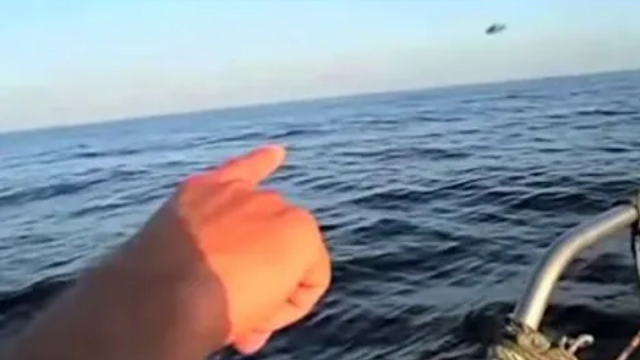 Actually, it involved the Spanish Air Force and as we see they are chasing this poor Extraterrestrial vehicle relentlessly. Until it's literally had enough ofvthese joker's and dives right into the sea, right in front of the fishermen. This all took place with Spanish fishermen. 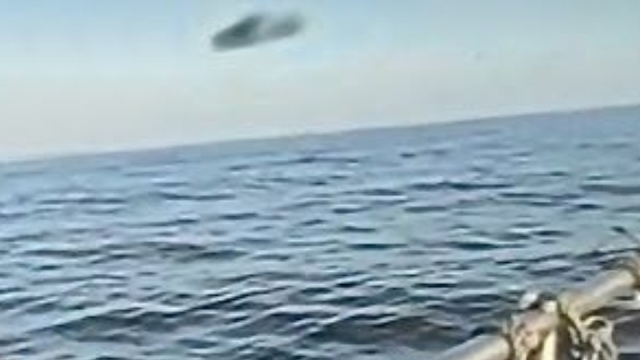 Pyramid Shaped UFO Right Next To The Shuttle

In this snapshot we can see the silver UFO dive into the ocean, the Jet is seen nano seconds later flying at speed passing by the splash as it's still in the air at this stage! Firstly though we see 2 Spaniard Air Force Jets screeching past the boat with the crew pointing and talking with excitement. That's the moment when we see the now USO (Unidentified Submerged Object) splash down and it takes off.

Below we see the UFO dive into the ocean and the speck above it is the Jet flying past it. 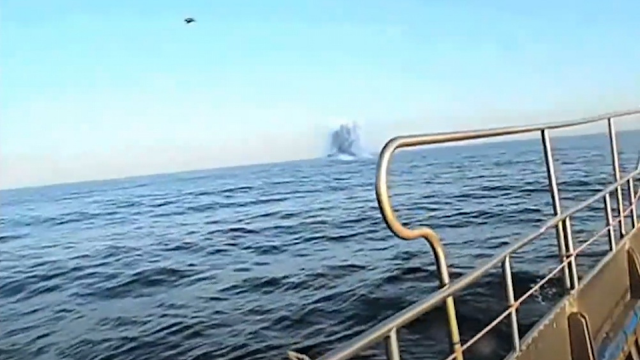 The Jets are now gone and lies have already been drawn up, all the pilot's we're in the Bahamas at the time and again,  UFOs don't exist. By the way we didn't catch anything on radar or satellite because can you believe it, the satellite cameras on this day we're down for routine maintenance, lol.

Okay that last bit of sarcasm didn't really happen but it's usually what we face when asking questions, that's if the questions get answered in the first place? This was huge, it's still huge and just because a couple of years have elapsed it doesn't make it any less amazing. In fact, it makes it more interesting as it's standing the test of time.

Here's the extraordinary YouTube video by The Murphy Project:

The Galician fisherman has decided to make public what, they said, lived and experienced while on his boat. While some apparent military aircraft chasing a 'foreign object' that hits the sea and made a spectacular dive, provenance unknown helicopter flies over the boat and ordered the fishermen to hurry to get away from the place where they are. 'Leave the area immediately, please contact the port. They receive instructions ... 'are the words to the fishing. The note accompanying the recording, shows the fear of the sender in such a situation: Sending this video after much thought, but after the scare, I think it my duty to report this has happened and I do not see any explanation.

I've not changed a word, I think English is not his first language but it's still a very good attempt, awesome.