Ancient times saw many anomalies and lots of strange rituals more so than in Ancient Egypt. Here's mummies with golden tongues. This is strange.

This is about as strange as it gets and it's actually not that rare (I believed otherwise), it's not a "one of a kind gold tongue" at all found in an ancient Egyptians skull.

I really believed that this was a rare discovery, even one of a kind but after researching up on this some more, ive just learned that 16 more mummies have just been discovered outside of Alexandria in Egypt. In one single family from ancient Egypt there was the father, the mother and their child all having golden tongues which is interesting. 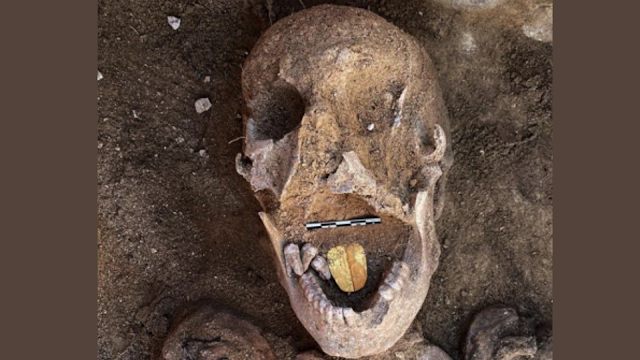 Credit: Live Science/Deccan Herald/UFO Sightings Footage/Good Reads/UFO News/Canva.
Archaeologists found three tongues of gold at the first site that I was researching even though as it turns out, lot's more have been discovered. This is absolutely stunning, it's very rare to find any tombs still intact (that I did know) and for them to still be sealed and untouched by earthquakes or natural land that has shifted is epic. Then there's the other terrible things that interfere with these wonder's of the ancient world like gravity pulling down the walls and roof of the tombs. But in fact, because the family wasn't actually buried together (suggesting to me, that they all died at different times) and because they had their own tombs, only 2 of which was actually robbed by grave robbers it's a miracle in itself that the cretins didn't see these gold tongues because they was hidden away in their mouth's.
Related post
Ancient Metal Pipes Found In China Shouldn't Exist So Long Ago
Quick quote Deccan Herald:

Another 16 have recently been discovered in Alexandria also. It was discovered at the temple of Taposiris Magna, which is on the southwestern outskirts of Alexandria.
At least one contained a human skull with a golden tongue nestled in its jawbone. The tongue was made of gold foil, according to a statement from the ministry, which added that it was meant to ensure that the deceased person would be able to “speak in...

Read more at: https://www.deccanherald.com/international/world-news-politics/archaeologists-find-a-mummy-with-a-golden-tongue-947287.html
Seriously, go check out that amazing story about the 16 new mummies been found outside Alexandria in Egypt in the just above link. 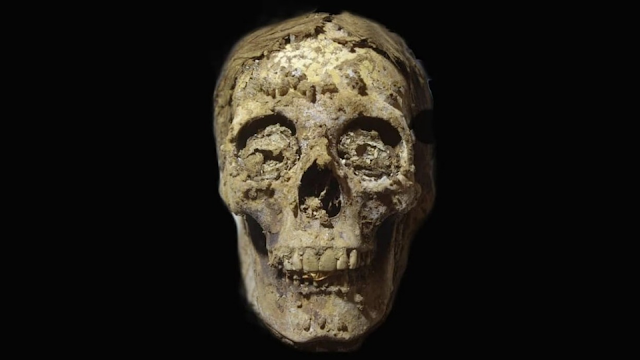 Credit: Live Science/Deccan Herald/UFO Sightings Footage/Good Reads/UFO News/Canva.
Related post
Astronaut Carved Onto Cathedral In Salamanca, Spain Here's The Truth
Everyone in recent history has wanted in on the ancient historic Egyptian tombs and their plunder! Because they knew of the vast wealth that would be waiting to greet them upon the opening of the tomb's doors, just like the Tutankhamen doors were swung open and "can you see anything", to which Howard Carter replied "yes, wonderful things". Check this Good Reads link out for some brilliant Howard Carter quotes.

That's not including the modern day "archaeology plundering" I'm talking ancient grave robbers that just wanted to sell the gold and diamond's, jewellery etc for whatever personal needs that they had.

The adult males tomb was completely untouched by the tomb robbers who probably had no idea that they were literally just opposite or inches away from the father's tomb, the husband of the adult females tomb and he's the father of the child who was also found with a golden tongue. This stuff is intriguing because it suggests that the object of the golden tongue was to be enable these people to talk with the Gods in the afterlife.
Who built these tomb's, did they sell out the owners of the tombs? How was it that these grave robbers could easily (it would seem) find and dig down into the tombs without any interference from the authorities at the time? Somehow these toerags were able to make a lot of noise and do so in a place were people of note was buried, and yet it would seem that nobody came to the rescue of these poor souls, quite literally souls. It's their eternal resting place, it's not just the gold they took, actually you'll find that a lot of graves that were plundered over hundreds of years were actually destroyed on purpose, their bodies were mutilated, smashed beyond recognition.
Related post
US Task Force Sent To UFO Debris Site 4,000 Years Old | The Grand Canyon
And if you know about mummification you will know that when the soul is outside the body, it needs to be able for the owner of the vessel (or the body) to recognise it? And the grave robbers knew this, so they took the trinkets made from gold hidden in the bandages usually above the heart. And the skulls were smashed so the soul wouldn't be able to recognise the body meaning that the soul will be forever lost, wandering around in the endless void of somewhere other than here.
Here's the link to the full news article.
Here's a brilliant video from YouTube about the golden tongue discovered in mummies skull:
Please share your thought's and opinions also any ideas that you might have about this amazing discovery in Egyptian tomb about the golden tongue 👅. I'd also appreciate it if you could share this post with someone who you think would appreciate it, cheers.
Credit: Live Science/Deccan Herald/UFO Sightings Footage/Unexplained Mysteries YouTube Channel/Good Reads/UFO News/Canva.