Fox 26 just uploaded to YouTube a video showing a light pillar filmed and photographed from 5 different angle. This unusual pillar of light.

Fox 26 (3 days ago) uploaded a video to YouTube showing eye witnesses photos from 5 different angles of massive light pillars from below and above the clouds to the ground in all different colors.

It doesn't matter what you think about light pillars because whenever anyone whitnesses it, it absolutely looks Extraterrestrial in origin even though we all know different when we come back to Earth lol, as science proves it's a natural phenomena, but still they are bringing us something that we might otherwise never have seen and that's what I'm talking about. 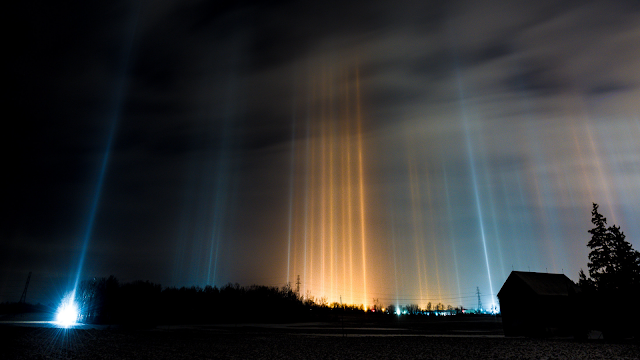 Some other countries around the world don't even allow anything like this information on their TV stations. It's usually the lesser advanced countries with dictator's at the helm. Anyway, Europe for instance doesn't get US channels other than going online etc. And to be honest with you, I'd never heard of these until a few months ago after researching another subject so I kinda made a mental note to one day write a post about this just because of how majestic and beautiful these look. It's something different and to have it from 5 different angles, that's truly newsworthy.

Just look at this beautiful photograph below, all the photos in the Fox 26 news channel YouTube video are all absolutely stunning. 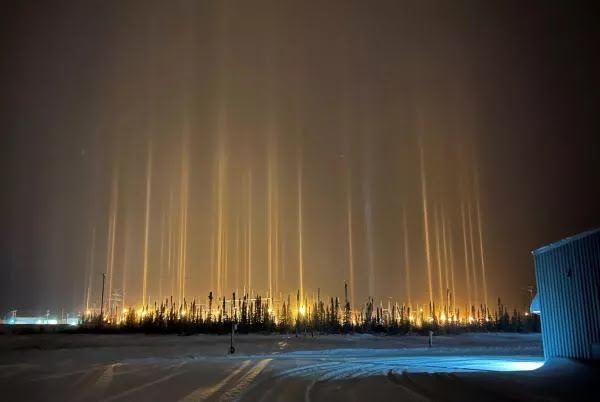 An energy company employee in Manitoba, Canada captured this spectacular image of light pillars at the Keewatinohk Converter Station, which is operated by Manitoba Hydro.

Wikipedia say's this about "light pillars":

A light pillar is an atmospheric optical phenomenon in which a vertical beam of light appears to extend above and/or below a light source. The effect is created by the reflection of light from tiny ice crystals that are suspended in the atmosphere or that comprise high-altitude clouds.

Seriously, set aside what you think about these unusual pillars of light, it's been proven that it's not Alien activity. I thoroughly enjoy bringing us all some amazing UFO related stuff and now it's a new brilliant video showing the Earth in some strange looking even bizarre situations like creating these spectacular light shows. There's always something that is going on in this world and there's always someone who has a camera. Some people will utilize online conspiracy theory websites and upload it to the editors and some people will just ignore it and probably delete it the next time they happen to look through the camera photos or videos? It's a different kind of phenomena but it's still a phenomena which is exactly what I cover so this fits right in.

A discussion among many of us on Twitter overnight and Instagram was: what was the orange light? Many areas of Houston saw an orange light that sometimes looked like it was pulsating in the sky, just as the sun was setting into the dark. 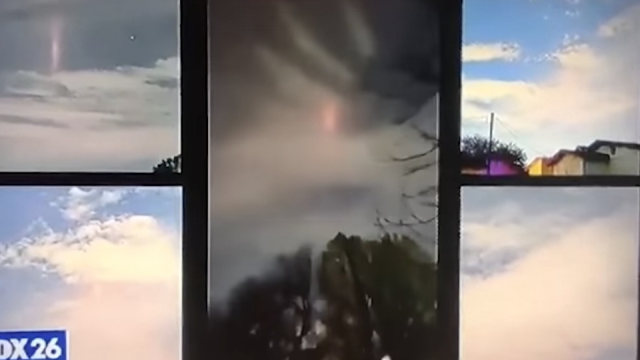 So we need to recognize that if it's good for the Goose, it's good for the Gander. What I mean is that the person who films the anomaly might just delete the media content. Well, so to the editor might delete it because it's not "UFO related" because it's either not that good they think or they just are too busy! So we need to pause for thought and realize to that it takes effort to bring you meaningful information on Ufology and conspiracy theories and also phenomena. 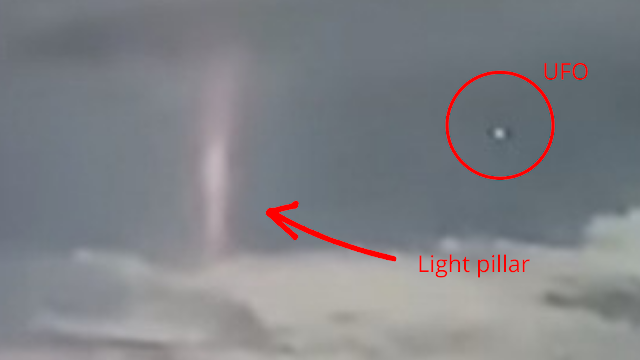 Seriously, it takes me half a day if not more to write a single post for this blog. Editing a video takes even longer because it's the effects, the narration, the media, the music, the description etc. It takes a lot of work to bring you anything that is anything related to decent strangeness and anomalies and now I've gone and added another phenomena to the pile.

Anyway, the best anomaly's always have the best coverage and boy has this recent (3 days ago) unbelievable light pillar has had a fair bit of news media coverage. Whenever anyone captures a light pillar in the night sky, the first thing on their minds is "Alien's invading" seriously, it's true and it's definitely a real fear because each day many more people are coming round to the reality that Extraterrestrial entities really do exist. Each year the statistics alone are going up with people who never used to believe in Aliens having done a U-turn based on new information. 2017 did it for a large percentage of the population of the United States just because of the UAP videos. It's understandable because lot's of people said before that "if the Government comes up with evidence and release's real UFO evidence, then I'll believe"...

The rest as they say, is history!

Here's a fantastic light pillar video that shows us something so unusual that even I'd question it and I'd definitely wonder if Alien's was invading, I mean just look at this amazing video and you'll have the same thoughts:

Please could you share this post with anyone whom you think would appreciate it, cheers. Also can you leave your thought's and opinions on this post thank you so much.