This is a very interesting but unusual light phenomena. It was caught on camera from Illinois and Indiana in the US. Two eye witnesses filmed it.

Light's in the clouds and people are jumping to conclusions as if they're well versed in cloud phenomena, light pillars of creation type phenomena.

These phenomenal light's in the cloud's happened in Indiana but was seen also in Illinois because these are neighbors. This light seems to be moving in an independent but extremely erratic movement style. In fact it's almost a type of jerking motion and strange movement? It's a bizarre sight for sure. The video eye witness who uploaded it to YouTube gave this description: Strange, active lights in the clouds over Shelbyville, Illinois June 12, 2015. But, it was also seen in Greenwood, Indiana USA. I'll add his description of what he saw at the bottom of this post. These light's have been seen by people around the world. 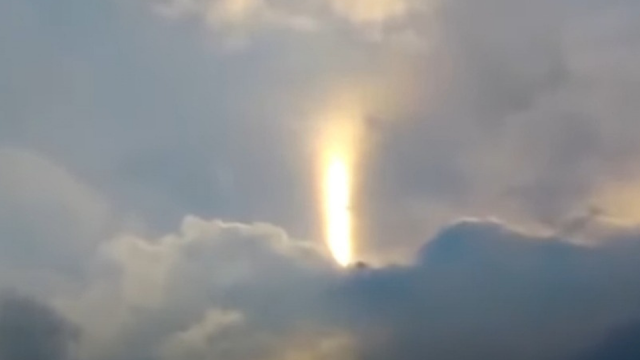 It's almost like a whip made from light because normally light shines onwards and forwards wherever it's been pointed, doesn't it? Normal light shines forward but this light is acting very different to what we're normally seeing? It's bending, it's a specifoc length which is so unusual and not normal. Is it plasma, a form of light which is using particles in the cloud to create hot, light in plasma maybe using directed energy? 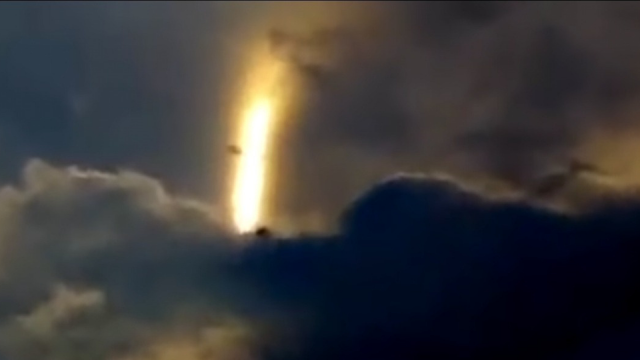 It's a good theory, it's based on psudo-science but CERN and the search for the God particle is absolutely real. HAARP is using energy beams to heat up parts of the atmosphere so anything else is possible. We do know that there is a clear effort to investigate the God particle, there's clear cut science backing it up using CERN because the scientific community at CERN have a particle accelerator which studies the universe within a second after the big bang happened. Are CERN and HAARP working together on new, different "highly questionable technology" with terrible consequences in the wrong hand's?

I won't even pretend to understand the in's and out's of this immensely complicated machine called CERN. But my understanding is that it's capabilities would allow it to destroy our planet.

Just that itself brings up many conspiracy theories and at the top of this pillar (for me personally) is the re-creation of the big bang itself! It's opening up a reality within a reality! Two stones cannot exist in the same place at the same time, but it's scaled down to within a second after the big bang explosion. But it's still a reality existing within a reality, right. That's my understanding and from that it should not have been given the green light! The assurance that these CERN scientist's gave us all filled everyone with confidence but for me, not so much. Because there was no back up... Or was there? A simulation maybe...

What's the worst that can happen? What if they couldn't hold it in suspended 3D inside the tunnel where the explosion occured, ehat if it just kept on expanding without stopping? What if it continued to expand, what if it explodes - how big would this explosion be? 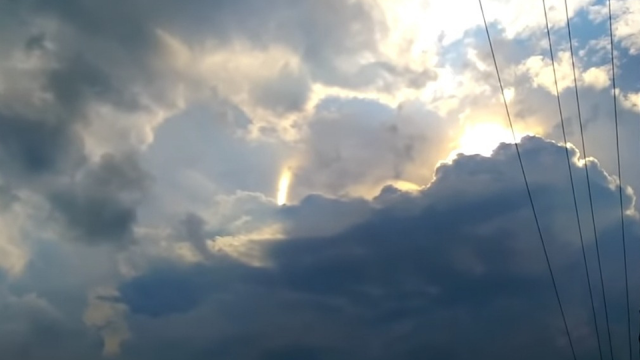 Anyways, we're all still here, so let's just continue like these world ending experiments aren't even happening! I think they call it "f*** it smile and continue onwards" or act as if nothing is going on. Look, I'm only giving you my understanding of CERN, I've not even explained to you what HAARP is doing, what it is capable of doing and what the evidence says it continues to do.

Okay, here's the story from Thirdphaseofmoon YouTube Channel and it does not matter what you think about these guy's, it doesn't matter because you've got common sense right. Only be afraid of fake news if you don't have the ability to understand what it is, that's going on or if you don't know how to think for yourself. Then and only then should you be afraid of fake news. Just rely on your smartness, your ability to understand when someone is filling you with crap.

Personally, I don't get it right all the time. This is a fact for a lot of people, but in general I get by just fine. I look at this video below and I know it's real, the only thing I struggle with about this is attribution and origin. Whos behind it, how the hell coyld I know that knowing that China has it's own HAARP, so to does a number of countries. See, this is why I'm struggling with it's origin, oh it's definitely an artificial phenomena but who's fingerprints are on it?

Personally I think Hugo Chavez led the world into a false accusation when he blamed HAARP for the Haiti earthquake because the scientific community came out and said it wasn't them, but continued to explain what it would take for a HAARP location to do, to be able to carry out such a thing noting that they don't do that! But, they've actually admitted that it can be done!

See, sometimes it's not what you say or even what you mean, but inadvertently the answer can sometimes verify by way of an answer but to an earlier question ie can the HAARP experiment be turned into an earthquake creating machine and make it look like a natural accident? Well, the answer to a further along question is yes. You see a lot of these type of questions in Government paperwork throughout most departments.

I looked up "HAARP location's" and omg they're all around the world! Here's a part 1 video of the locations  of HAARP and it's"heaters":

It's a good thing that there was a few people who filmed the amazing light show which happened in the cloud's. It's almost as if it's a laser light show put on by a bored scientist at HAARP lol. It's either that or it's a malfunction in the equipment maybe? I somehow think that this is not a natural phenomena, I just don't think even a natural phenomena could create what looks like so much energy? Is this electricity, is this a laser or light or is this plasma? What I do know is that this is definitely, most definitely not natural. It's

H.A.A.R.P Project Blue Beam Holographic Projection! 2015 SCARY VIDEO! What Was Caught On June 12 over The Skies Of The Western of the U.S. Quade and Chris Capture The Same Event over a Span Of 180 Miles!

Original eye witnesses to the lights in the cloud's:

Here's the locations of HAARP around the world:

Lights in the sky. These have been buzzing around the world for a while, at least the same time as the very first HAARP was installed utilizing the Over The Horizon Radar (OTH) installation in Alska which stand's for Over The Horizon radar.

Over-the-horizon radar (OTH), sometimes called beyond the horizon (BTH), is a type of radar system with the ability to detect targets at very long ranges, typically hundreds to thousands of kilometres, beyond the radar horizon, which is the distance limit for ordinary radar. Several OTH radar systems were deployed starting in the 1950s and 1960s as part of early warning radar systems, but these have generally been replaced by airborne early warning systems. OTH radars have recently been making a comeback, as the need for accurate long-range tracking becomes less important with the ending of the Cold War, and less-expensive ground-based radars are once again being considered for roles such as maritime reconnaissance and drug enforcement.

There's way to much to put in just one post, plus this is just my own opinions. I really don't know everything that there is to know about HAARP CERN and then there's the conspiracies surrounding these installation's. The works been going on for decades, just one program in terms of paperwork would fill an average sized swimming pool if the work was done analogue or like it was 1950. So, what I'm highlighting is the fact that not everyone can know everything. Also a lot of the conspiracies are only based on "what it is capable of doing".

A lot of the conspiracies surrounding these installation's is based in fear!

Fear can ignite the imagination, fear can be the catalyst for damage. That's why we must alway's use our common sense, weigh up the pros and cons and still even then remember that it's still only your opinion. When we refuse to look at another idea, another proposal, or wether we can see another answer but still stubbornly refuse to look at it, that's when it's become toxic.

Alway's stop to see if your still seeing the bigger picture? Never get way to engrossed and diversify your thoughts. Remember as well that there's no way that you can be right all the time! Believe me, I'm often wrong, but I adapt, it's not a bad thing to learn. I love learning and just having an opinion is better than no opinion at all.

This happened in Greenwood, Indiana USA. I was out riding my bicycle and a storm was approaching, then this strange light caught my eye so I pulled out my phone and shot this video. After getting so many replies saying it wasn't haarp I'm changing the name to, Crown Flash, a Crown Flash is when ice particles get aligned in the same direction from the electrostatic field created during a thunderstorm. Its usually invisible to the naked eye but the way the sun hits it, it makes it visible to the naked eye kind of like a rainbow. THANKS, everyone who left a comment. If it wasn't for you I would never have found out what this was.