A woman and her child was driving along in the car when the woman's child, a girl started pointing at a cloud. There's something inside the cloud.

Cloud's seem to be the perfect cover for any UFO to hide in and to actually travel inside of them from place to place.

This UFO sighting is different for example because I believe that we're seeing one having difficulties? 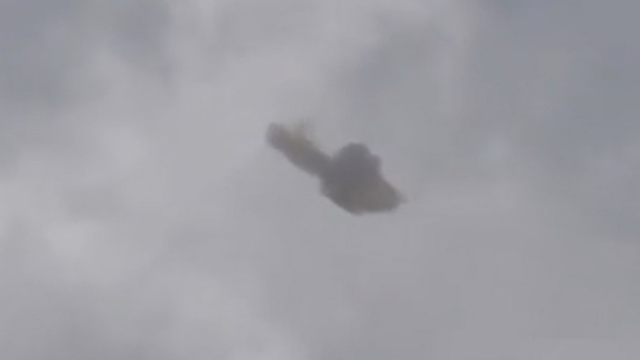 But because we can hear the girl in the car at the traffic light's actually saying "there's something inside it" I think she means that she can see a UFO inside the drifting cloud. We can definitely see something but it's really hard to make it out, but still as there's definitely something inside of this, is it classed as "stealth technology", or is it an immitation cloud or whatever you want to call it?

No matter because most certainly it's got something inside of it. Because the girl in the car can see it in real time, she can see it in more details than what we can all see. 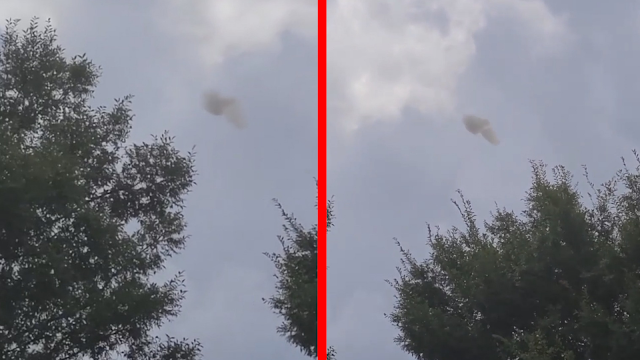 I'm sure that this is malfunctioning, it could be that it's out of control because if we was to be seeing it without a failure or in it's intended position then we quite possibly could not even see it? There could be other's right now in areas of the world utilizing the cloud's as cover? This might be why the Government is helping the Extraterrestrial species out by modifying the weather of the world?

Os this a contract with the Alien species? Chemtrails are a fact of life, it's something that was recognized a long time ago. Okay people might think that it's the Government's way of getting antidepressants into people or a great way of getting aggression suppression gas into people also.

But it could also be a very good way to "help Extraterrestrials travel around the world undetected" because it's low enough to avoid radar and even if it does get seen on Radar, maybe it's covered up? But instead of always having to confirm or deny claims even from within the Government itself, they just create a secret agency like the Chemtrail one.

It's a far fetched idea, it's actually a very hard to believe theory but so was UFOs been real at one time! Now we've had Unidentified Aerial Phenomena (UAP) disclosure, guy's I'm been serious when I say that in this day and age - in this age, I'm refusing to rule out absolutely anything because I'm coming round to the idea that anything is possible. Please, don't be so quick to rule out even the most improbable ideas or opinions as it's 2022, you should know by now that anything is possible!

Cube UFO Comes Out Of Clouds Filmed By Eye Witness

We've had worldwide pandemics with the full population of the world on lockdown! We've got wars raging in Europe! There's hunger and famine when it was supposedly a thing of the past. Then in 2017 the US Government released 3 UFO videos which was our UFO disclosure. They admitted that Extraterrestrials exist for heaven's sake. But can you believe that this information went over people's heads... Because it has and people are still posting on Quora "Do you believe in UFOs". Seriously!

Back to the UFO sighting from the car:

The many different examples of strange looking cloud formations are becoming a common thing, a common sight. From Canada to Argentina, Sweden to Thailand we're all seeing a huge increase in UFOs that are hidden within clouds. There's even evidence which I've wrote about before showing actual UFOs mimicking cloud's that hover and float like real clouds, I'll link to that exact post here.

This UFO sighting happened over the skies of the US but we can't say where, even though we don't have specific information, the video below still needs to be seen. In what can only be described as a unique UFO sighting, check this out:

If you know someone who would appreciate this post, please can you share this post with them thanks. Also, if you have any suggestions on what this is then please leave your thought's and opinions in the comments section below, cheers.

Also, be sure to check out our 2nd UFO website at www.ufosfootage.uk cheers guys.