Yang Liwei Chinese astronaut had a Alien experience in his spacecraft. There was a knocking on his craft's exterior. Alien entities exist definitely.

Imagine for just a second that just you and "you alone" are in space minding your own business (did I mention that you're all alone) and your in a tiny, tiny spacecraft literally with enough room to "not" swing a cat and there's a knocking on the door!

Just imagine what's going on in this poor guy's mind because I'll tell you now, I'd be having mad rushes of adrenaline surging through my body, my mind would be holding on to reality with one finger like dangling off a cliff.

He's in space and something is knocking! Imagine that.

Common sense would be kicking in by now though (maybe) so metaphorically speaking, I'd be grabbing onto reality by now with both hands and I'd just take a peek out of the porthole which is what he actually did in the end.

Yang Liwei Chinese astronaut looked out the porthole window thinking "who's there" and that's scary.

Okay I agree it's a truly strange event and I'll tell the story now. 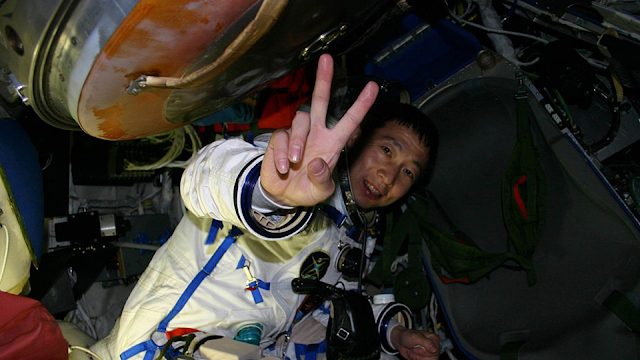 Below is UFO Sightings Footage default wallpaper. I've created it as an Extraterrestrial species in space. It's your first time up there in the orbit of everything you've ever known and did I mention again that your all alone in the vast emptiness of space. Then suddenly - a knocking sound and it could be at the door.

This is supposedly what happened to astronaut Yang Liwei, China's first man into space which was on his first flight way back in 2003. In a recent interview though he's pretty much told the most scariest movie plotline that's ever happened! Because he's now recalled hearing someone knocking right on the body of the spaceship just as knocking an iron bucket with a wooden hammer.

"It neither came from outside nor inside the spaceship."

But it gets even stranger because for a rational thinking, tough as old boot's communist astronaut, he literally just got up and looked out of the window at the blooming door! Now, I don't know about you but it's literally the stuff of nightmares or even the movie " Alien" with Sigourney Weaver comes to mind right. The big, actually it's a massive Alien with an extendable mouth that comes to mind! Can you imagine (he's the first person that has ever come close to a real life situation like that. On Earth there's just no way that you can ever come into a situation like that because your on land.

This guy, even though it's unlikely that an Alien like from the movie exists, but he's the only person that has gone through a situation that is literally the closest to a scenario like in the movie because he's in space and he heard a knocking on the craft when it shouldn't be! So yeah, 😲 wow!

Given that there is no medium for sound to travel, space would be expected to be silent.

"The travelling of sound travels requires a medium - be it air particles or water molecules or metal, solid atoms," Prof Goh Cher Hiang, an expert in space engineering at the National University of Singapore, told the BBC.

Naturally, he got a bit nervous and had a peek out the porthole, but failed to spot anyone pranking him, because let's see it logically guy's, it could have only been a joke or a mechanical failing of a motor because there is no air or wind for a wire to be hitting the outside of the capsule type spacecraft. There's no other way to look at this "unless" it literally is a Phenomena as yet not known to mankind? Any explanation for the eerie knocking on the craft, which is crucial in terms of information because it shows that it's not far off in the distance, this is right on the craft or capsule (whatever you want to call it) and it's simply scary!

Here's the weird video uploaded to YouTube by InformOverload channel:

Here's another video of the story:

Yang was in space for the first time – the only man in a small capsule orbiting the Earth. And then something truly bizarre happened – something that the confused astronaut hadn’t spoken about publicly since he came back from his 2003 space flight. But now he’s broken that silence. - In fact, it was a break in the silence that left Yang so worried. Because during his 21-hour mission outside of Earth’s atmosphere, he heard something that he shouldn’t have. Something that would spook you even if you weren’t in the depths of space. What he heard was a knocking on the side of his space capsule

It's a truly strange place, not just on Earth, but the world has has definitely seen changes and attitude towards UFOs and Aliens has really changed. If you've got any thoughts on this knocking in space, leave them in the comments section below, cheers. Also please share this post, thanks.