Unbelievable UFO in the shape of a cigar or tube has been caught on telescope by NASA scientist's in the M42 Nebula is in the Milky Way Galaxy which is better known as Orion's Nebula.

There's absolutely nothing that produces that kind of planet, craft or other in space! Now it's a totally different story here on Earth, but space, no way! This is a tubular shaped UFO, it's almost like a long craft or a perfect mothership as viewed from Earth. Remember that if we can see that thing, it can definitely see us. 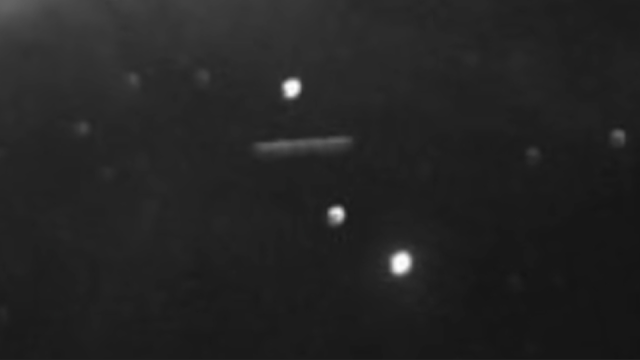 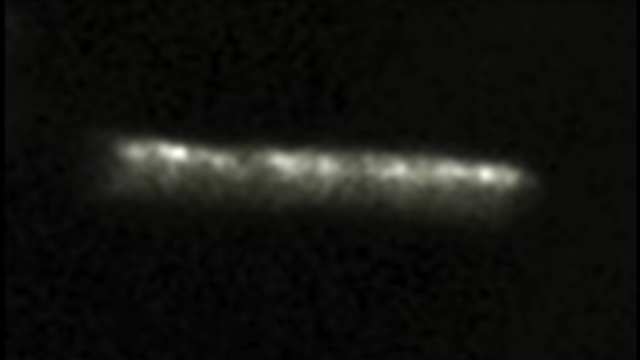 This has to be massive, because if those Orbs or star's next to it are anything to go by then what we're talking about here is a civilisation that's got hundred's of thousands of years ahead on us! Can you imagine an Earth in a hundred thousand year's? Neither could I, but if we're clever enough we just might survive this "Heaven on Earth" for as long as we can and when we're cast into space through our own doing ie because we've destroyed the Earth I just hope that we take all our fine knowledge with us, because we're going to need it. With every generation lost it'll take more information to the grave, lost in the ever decreasing pond that we once came from. As Above, so below.

This is not how comet's are supposed to be!

Is that what we're seeing here? A people a "species" that has to wander aimlessly in space like an intergalactic hobo? Nowhere to go, just wandering around the open emptiness being moved on by species after species?

WOW, I know that there's a metaphor for everything but damn, that one's brutal. Do you know where "anything's possible" comes from?

We live in a very strange world where we see tube shaped UFOs the size of which is incompressible but it's on that edge of been accepted by the people seeing it because we're all constantly being told to ignore what we see or we are being told "what we see is not what we are seeing" and that's a crazy world. Personally I've come to learn to see something, decipher it in my head and rely on my own conclusions. I'm level headed and if I don't understand something I look it up. That's rational thinking and learning and believe me, it's a very good way of educating yourself.

So, when I see something like this, I don't rely on known liar's at known agencies that like to say one thing but do another - to get my information!

There's nothing else in space to compare it to, there's no asteroid that looks like this although the old adage suggests that the asteroids and comets come in every shape imaginable? But "imaginable" aside and in reality, the tube shape planet just doesn't even exist. Now if we apply it to a lifeform however the possibility of what's being seen starts to look like a craft, a habitable mothership with easy stackable level's where lifeforms can exist or even thrive?

It definitely doesn't matter whatever you put this UFO shape against, it will stand out as unnatural and an advanced technological marvel. God only knows how big this really is? NASA can have a great assumption or guess at it but the true dimensions are probably in line with everything else in space which is "humongous" or absolutely massive!

I really hope that you can look into this as well as myself? I personally want to know as much as I can get my grubby mits on. The Extraterrestrial entities that are here, in space and wherever else that they can be found ie another dimension (another story) must have something to teach us? They haven't come all this way to stand there and say absolutely nothing! They must have a message for mankind or something that we can benefit from? What's your thoughts on this video guy's? Let us know what you think in the comments section below, cheers. Please don't forget to share this post, thanks.

The first known interstellar object to visit our solar system, 1I/2017 U1 ‘Oumuamua, was discovered Oct. 19, 2017 by the University of Hawaii’s Pan-STARRS1 telescope, funded by NASA’s Near-Earth Object Observations (NEOO) Program, which finds and tracks asteroids and comets in Earth’s neighborhood. While originally classified as a comet, observations revealed no signs of cometary activity after it slingshotted past the Sun on Sept. 9, 2017 at a blistering speed of 196,000 miles per hour (87.3 kilometers per second). It was briefly classified as an asteroid until new measurements found it was accelerating slightly, a sign it behaves more like a comet.

Here's the brilliantly put together video which was uploaded to YouTube by the Unexplained Mysteries channel:

This NASA probe just accidentally detected something huge travelling through the Orion Nebula. Today, we take a look at what was just detected in the Orion Nebula. The M42 is a nebula that can be found in the Milky Way galaxy. It's more commonly called the Orion Nebula, and it's been detailed by many ancient cultures throughout our history. The Orion Nebula can be seen without the use of telescopes, making it one of the most viewed and photographed Nebula's. A few years back astronomers spotted an interesting object while looking through photographs of the Orion nebula they had captured. The astronomer was using a powerful telescope and decided to photograph Orion.

Please leave a message about this in the comments section below, cheers.