Tipton UFO sighting on Andrew Road the UFO is Black and the last 9ne was filmed over UK Country in Sutton Coldfield. It's a real UFO sighting.

A triangular UFO dubbed the Dudley Dorito has been spotted over the skies of the Black Country and Birmingham.

Quality inspector Mr Munesh Mistry, aged 21, spotted the triangular - shaped object above the skies of his home in Andrew Road, Tipton, at around 10.15pm on Sunday. It comes just a few weeks after a UFO was spotted "hovering" over Sutton Coldfield on the eve of Bonfire Night. 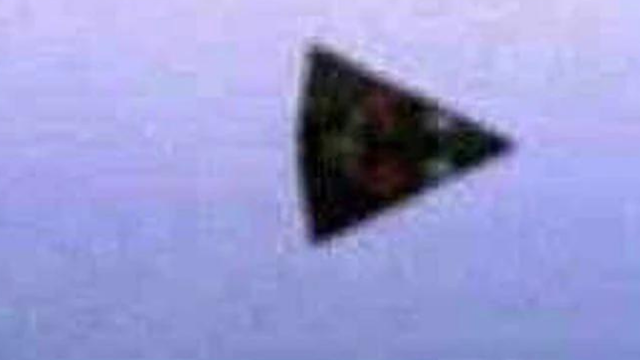 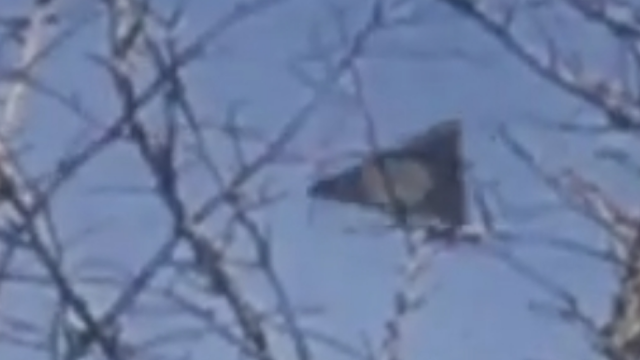 Triangle shaped UFOs don't usually hover which show's us that it's the smallest detail which could absolutely make that specific UFO sighting really stand out. Triangle UFOs don't hover, I've never come across one in all the time I've been researching UFO sighting's, it's not to say that it doesn't happen, it just means at least to me, this is a rare UFO incident.

That time the triangular object, which was said to be four or five times the size of a commercial airliner which is probably one of the largest UFO sightings that has been recorded in that part of the UK in a very long time. It was seen by eye witness Mr David Allen from Bendall Road, in Boldmere on November 4.

It sall started in October 2008, when a photograph of the "original Dudley Dorito" was hailed as an important piece of evidence of alien life.

People in the Black Country were seeing orange-shaped objects in the sky before Christmas. Now, only weeks later, another 'triangular' UFO has been spotted over South Staffordshire. Mr Mistry told the Express and Star he saw the object while his flatmate was doing some work in their back garden after they had been out for a drive. He said: "My friend came in and said "What is that?" and my flatmate pointed up at something going in an arc over our house so I looked up and I saw it too, I thought it was a plane but my friend said it was a UFO. It hovered there for a few seconds and then took off very quickly." A video of the object was recorded by Mr Mistry and shows what appears to be three bright lights, each with a smaller red light next to it.

The UK seems to have been invaded by extra terrestrials recently. Having a look online there have been plenty of sightings, but what makes the most recent one from Tipton even more spine-tingling is the fact it's triangular in shape. Mind you at least one of the older ones was too (The Sutton Coldfield one). It was a few days before this Tipton UFO sighting that it was spotted in Sutton Coldfield. These sightings have people concerned about alien life visiting us from other planets and galaxies, or that maybe something isn't quite right with the world we live in.

People are claiming to have seen a UFO in the skies over the UK for the second time in a matter of weeks.

A UFO which was said to be four or five times the size of a commercial airliner has been spotted hovering over Sutton Coldfield.

David Allen, who spotted the triangular object, said that it was stationary and had three lights underneath it.

Mr Allen said: "It was just floating there."

"I've been looking at the sky for years and I've never seen anything like this before."

he saw the UFO at around 11pm on November 4 - just days before Bonfire Night.

"I thought it was strange because it was so big."

"It was definitely not an aircraft - it was too big for that."

Here's just a bit of the extraordinary evidence that is the UFO sighting over Tipton, UK:

The Dorito-shaped UFO was spotted over the skies of Tipton, West Midlands.

The object was seen for around 20 minutes before disappearing into thin air.

"I was looking out my window and saw a bright light in the sky.

The sighting in Tipton is the latest in a series of UFO sightings in the Midlands and beyond. UFOs have been spotted around the globe and now it seems as though West Midlands residents aren't immune.

"I thought it might be a helicopter but then I realised it wasn't moving."

He said he contacted his brother to see if he could see it too but he couldn't.

Munesh added: "Then it started moving slowly and disappeared."

It is unknown exactly what Mistry saw, but his sighting echoes the Sutton Coldfield sighting in that it was a triangular-shaped object. Whether these sightings have been hoaxes or genuine sightings, they are both worth reporting and having a discussion about, as they might give us some insight into the UFO phenomenon.

Latest UFO sightings in the UK are a reminder that there are still plenty of people interested in these encounters. While others may consider this old stuff, sighting reports still pique our curiosity. Even now, people are looking up at the skies wondering: is something out there?

So far, there have been no official explanations for any of the UK's recent and ongoing UFO sightings. As if there ever will be, right? At this ongoing rate of UFO disclosure and Alien disclosure (the UK is waiting for our UFO disclosure). However, it isn't uncommon to see objects like this flying around the night skies in the UK or across the world. But it seems that the Government just hasn't got a backbone the spineless bunch of power hungry politicians who just want to further their own goals. That's not an opinion, that a fact! It's possible that they simply don't want us to know what they know or thst they are here - or that real aliens are still out there exploring space and finding new civilizations every day. And who knows? Maybe one day one of them will pay us a visit but park directly on the Houses Of Parliament car park.

The Dudley Dorito isn't the most flattering name is it, but it certainly explains in it's name where it was filmed originally and what it looks like lol, a Dorito. If you have any thoughts and opinions on this, please share them here, cheer's.