What's up with these UFO sightings because they're absolutely everywhere and that's not exaggerating, that's just been straight up.

The eye witness is adamant that it's an otherworldly craft because he had first hand experience of the craft, we should take his opinions for what they are, which is great because he was there. He was focusing on capturing nature but noticed that there was an object in the distance glinting or shining. He tries to focus in on the cylinder shaped object and that's when he says that the object started to shine. 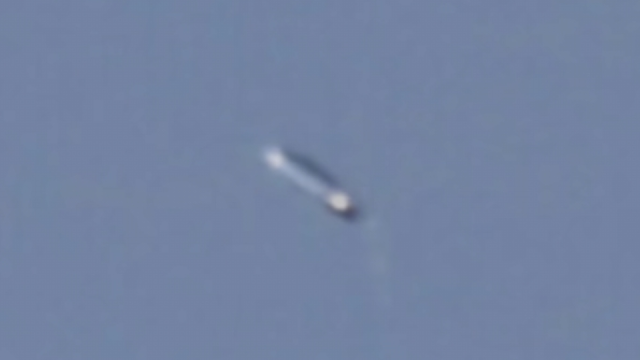 Thanks for checking out this post, I appreciate it. Just thought I'd let you know. 🙏

Is it a bird? Is it a plane? No. It's a mysterious object bending the laws of physics by hovering but without no propulsion system or otherwise, whilst being filmed. It's a cylindrical shaped object or pill and it's glinting as if to say, 'I'm not from around here'.

There's a lot of people interested in this "pill shaped UFO" because it's not a fake, it's not a hoax and it's definitely worth investigating.

A nature photographer was walking through a wooded area and noticed in the distance a glinting or shining object. He tried to focus in on the object and found that he couldn't because the craft was gliding or otherwise moving away. So he starts towards it, but as he gets closer, the object quickly flew further away. He says that it's at this point that he became adamant that there was a craft because he realized that it was very much like a pill shaped object.

The video shows a shining object that he noticed while focusing in on the beautiful scenery. He zooms in and moves around as if he's trying to keep it in frame and that's when the object took off. This may not be UFO related but it is definitely something shining and glinting among the trees. Is it possible that this is a camera malfunction or is there truth behind what he claims? We'll have to examine it further.

What would you do if there was a strange object floating over your head? More specifically, what would you do if you were a nature photographer who was taking pictures of birds, when something else photobombed your shot? Would you assume it was a bird or just bad luck? Would it scare you in any way if a UFO zoomed past you and it was so close you could touch it? I've never come across a UFO incident where an actual UFO flew past someone and was so close. In fact most if not all of the UFO sightings only ever have them way off in the distance and someone filming them. Introduce yourself already, blooming hell.

Here's one of the strangest quote's I've ever read:

A UFO shaped like a pill is so 2015. The latest trend in alien and extraterrestrial crafts is a little more …organic.

He thought it was just a reflection from the sun until he realized that it wasn't moving like one would expect from any plane or helicopter, even though it looks like a plane or helicopter from afar. The man was able to zoom in on the object and get a better look at what appears to be an aircraft or spacecraft of some sort.

The video shows an apparent UFO shaped like a cylinder, wich is kinda domed at each end of it and that it looks metallic. The shape shown in the video is similar to what some have described as a "pill shaped UFO." It could be that this UFO could be that it was aware of the camera and didn't want to be photographed. Either way, the video may indicate that aliens are managing to get past the military defense line (ISS, satellite relays) in order to observe us from our own atmosphere.

YouTube video description:
Bret Harrison Jones was out with his camera looking for nature when he spotted the "pill-shaped" object coming in and out of focus from his home in Guilford County, North Carolina, two weeks ago. Footage shows the flashing cylindrical shape in the distance, which Mr Jones believes was at least the height of a commercial aircraft. The 34-year-old full-time eBay seller claims he was "blown away" by what he captured and believes the aircraft is 'otherworldly'.

The man took some pictures of the strange craft with his camera but then lost sight of it shortly after filming the video above. He claims that this wasn't something that you would see every day and definitely not something that you'd expect to see flying over your head while out photographing nature.

The witness has been sharing his story with everyone who will listen and it has gotten quite popular amongst UFO believers and skeptics alike.

The theory behind this sighting is that maybe this was some sort of military drone test flight or maybe even a piece of space junk that fell from orbit? I think we can rule out military drone test flight because they wouldn't fly over such a populated area and if they did, they wouldn't be able to land anywhere near where people live or work or whatever else they do in their daily lives.

I feel very confident saying that what the witness captured on video is indeed an alien craft. If this was not a UFO then what is it? There is truly something to these cylinder shaped objects. Whatever it is, it's very strange and I would like to see more of them. In this particular video, there was no light surrounding the object until he focuses in on it, when the camera picks up some sort of energy field surrounding the craft that shimmers and shines. This could be a cloaking device maybe, which means we could have a ship in our sky that wishes to mask their activity from us. If you ask me, I would like to see more of these cylinder Shaped crafts because they are explaining something that has never been explained before which os that life is everywhere and we need to get used to it.

There are things in the air we can't explain, but this is it. It's there for everyone to see, and no one can dispute it. The pictures are there and the video is there. People who have seen these things are not lying, they're not intentionally creating stories just to get attention, they're simply telling us their stories of what they've seen and heard.