The Great Sphinx Hidden Chambers And Hall Of Record's

There's supposedly a hall of records underneath the Great Sphinx in Egypt. The Egyptian authorities covered up the entrances to the Hall Of Record's.

If you look at the top of the head you will note a round lighter coloured patch, It looks like it has been altered and there's one behind the right ear.

The image of the plans below shows it a little more clearer and the close up shows even more information on what everyone already knows exists anyways. There's a room actually inside the head of the Sphinx. Everywhere in the Great Sphinx is pretty much connected with hidden tunnels, I'll add them images below. We just don't see tv shows about the Great Sphinx like we do for the Pyramids. 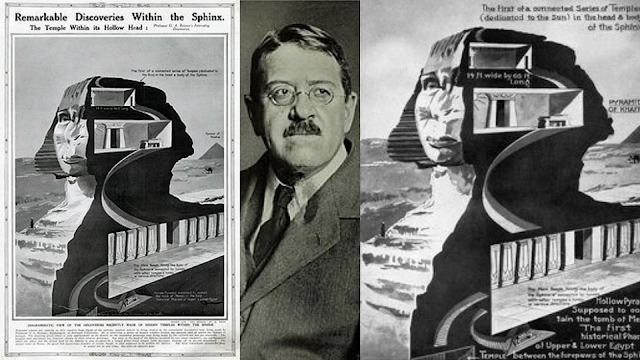 Is There An Alien Chamber Beneath the Sphinx? 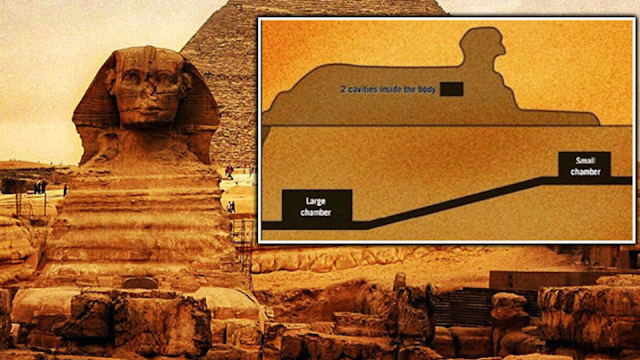 The ancient Egyptian moon god, Hermes Trismegistos reported on a library of knowledge in his mystical works. Legend has it that there is a maze below the paws of the Sphinx that leads to the mystery-shrouded Hall of Records, where all essential knowledge of alchemy, astronomy, mathematics, magic and medicine is stored. The library of knowledge - researchers continue to search for it today. Is it myth or reality?

It's almost as if we all know innately within us that there's a lot more to this than meets the eye with the ancient stone statue that is the Great Sphinx of Egypt. The Government of Egypt has actively cemented it up, hidden the entrances and don't let anyone in. It's not like the Pyramids which are just as much on show as the Great Sphinx. So why all the hush, hush?

Now, I don't recommend messing with time or flux capacitors but if you must, then go back and check out the secret doors found in the early days of the "tourist's and archaeology experts" which mysteriously covered up now... But seriously if you go back in time and look at older ariel images you can clearly see that the top is open. Check this link for more information on this.

In 1914, Professor George A. Reisner of Harvard University excavated the hole on the head of The Sphinx. He came back with a story that has almost been erased from history.

Millennia-old Egyptian records speak of a library of knowledge. A place where all knowledge is stored. Researchers and archaeologists continue to search for it today.

In 1914, newspapers around the world reported his findings, including a temple of the Sun and also the sarcophagus of the first Pharaoh.

These findings have now been erased from history books and Egyptian authorities deny the Sphinx chambers' existence.