Don't Judge It Before You See The Video It's INSANE!

This is the strangest UFO that were ever going to see. It looks fake but I can't understand why it looks so real? Maybe it's intended to be like that.

There's absolutely no way that this could be real, right but yet there it is, even the eye witness filming it is definitely real and talking to a friend about it.

Seriously it looks like a toy, it's shape looks like it comes from Hollywood AND yet it's passed my tests at least - so go figure! It could be intended to look so good that it cannot be determined one way or another? No copy and pasting can be detected, there's no filters covering it, and it's definitely got no strings attached to it. Just because there's no information with the UFO video (that I can find), it doesn't mean it's not real.

And there's no bizarre laser show going on or holographic animation. The UFO video is as real as the head on your shoulders but I can't find any way to dismiss it and I really want to because like I said, it looks like a toy.

It's got no copy and pasting mark's around it that I can find and it's not been put through any filters on top of each other and yes for real, I even looked for strings and blue Tac with Fairy washing up liquid bottles.

This is the biggest indicator of a hoax if there is one:

It's a clear UFO because when the camera is zooming in and out, the UFO goes blurry right on cue and sharpens back again and believe me, that's near on impossible for an amateur UFO video which is all indicating that it's real. These are all good signs that say the video and the UFO is real - but I still can't get my head round, full stop.

I'm only looking at this in the first place because I'm stopping myself from judging UFOs on a glimpse. I realised that I can't seriously take one glance at a supposedly UFO and determine if it's real or not. I don't have super powers like that. I'm not a witch and I can't tell the difference between a real UFO and a fake AT ONE GLANCE LASTING 2 SECONDS! 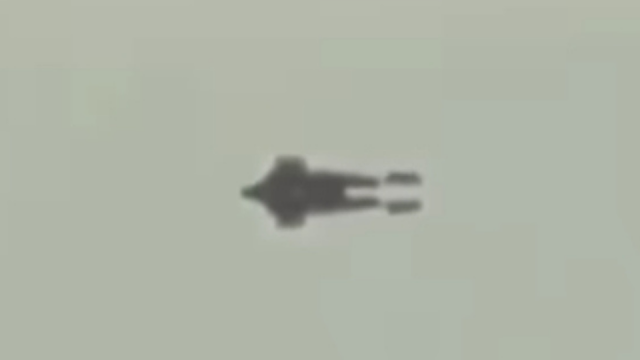 But it's about as bizarre as it gets, the thing is I don't want to believe it, I've got this nagging voice in my mind saying it's a puppet on a string - but the UFO video is real, the craft is really there and the witness is also trying to understand what he's seeing just like I'm doing watching the video, but him and his friend was actually there... So I really don't know what to believe?

Everything in my conscious mind is telling me that it's a stupid drone that looks like a Star Wars fighter. I don't like the idea of someone laughing at me for believing it's real and they know it's not because they faked it. If it is a drone then it's a full size (plane size) drone and a very fast one at that! Once again I find myself out of my comfort zone and hiking around the lonely territory of strange, bizarre looking spaceships.

It's almost a Twilight Zone or Matrix glitch wonderland of Alien spaceships where up is down and left is right etc. As a photo, it almost almost certainly looks like a fake, but as a video it's passed all the usual tests.

So once again, I've in essence proved to myself that just because I don't like the look of a UFO in a video, that doesn't mean it's a fake. I've got common sense but I don't have a 6th sense of having the ability to tell a fake UFO from a real UFO. I like to think I can glimpse a UFO and tell you all about it, just one glimps as I'm scrolling through UFO photos is all I need to do a full back story and a genuine test.

Of course that sound's absolutely absurd, that's because it is absurd! Nobody and I mean nobody can have a glimpse only of a UFO and tell you if it's real or not, especially since the US Government's released 3 real UFO videos. Now we have UFO disclosure, stopping to check out every single UFO has become more important than ever.

Here's the short but awesome video:

Please don't judge UFOs before you've had chance to check them out, if you could share your thoughts and this post I'd appreciate it, cheers.