I've never seen such detailed and clear UFO photo's specifically like these white UFOs in my life, and I've seen a lot.

First and foremost guy's, I'm not starting to doubt any pilot's today because hundreds of thousands of people "if not millions of people" trust pilot's every single day with their own lives - so why would I start to doubt their integrity now... 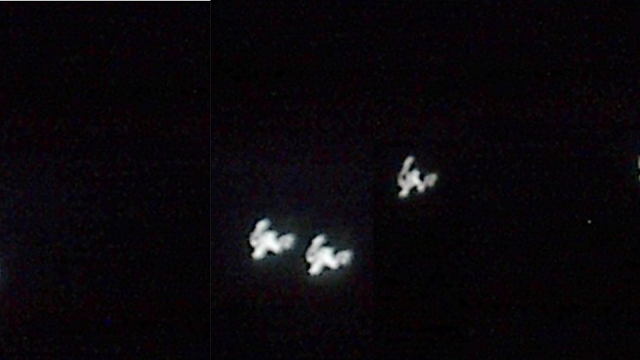 Credit: The UFO Times/UFO Sightings Footage/UFO News/Canva.
I've been researching UFOs for such a long time that I'd instantly recognise these if I'd seen them before ie the shape (I know I would) it's such a distinct shape, right? Because of how much they really stand out from the run of the millUFOprofile (ball, triangle, saucer, cigar) I think we wouldall recogniseif we'd have seen these fantastic UFOs before. Mind you, that's only a supposition on my part though as I'm just guessing that everyone or most people would instantly recall seeing these odd looking UFOs before?
Related post
UFO and Jet Pilot Really Engaging In Mid Flight - Epic Footage
Looking back over the years, I genuinely cannot recall seeing photo's as clear as the pilot's have reported in this instance. Nor, can I guarantee the authentication of these photo's but I will speculate based on my own common sense for what it's worth.
I'd like it if you'd leave a comment or any ideas that you might have, especially if you've seen anything like this before, thanks. Without further ado, here's what I think. 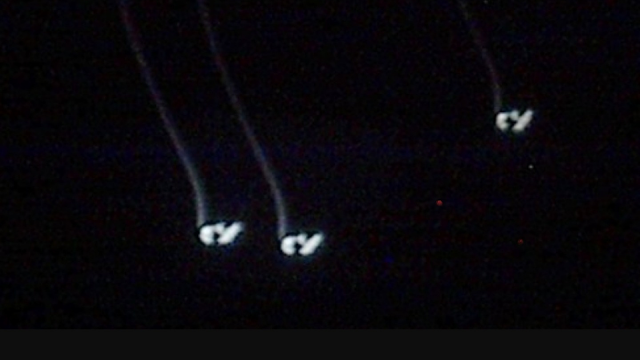 Credit: The UFO Times/UFO Sightings Footage/UFO News/Canva.
Just because these craft's look especially good, especially intriguing and if your into Ufology, as soon as you see these, like me you'll immediately be drawn to them. The look of these, the shape and colour of them and the fact that we can see "three unidentified flying objects all in the same photograph" and to boot, this photo was taken by a pilot, is staggering. I'm gonna put the full eye witness description from this encounter right here now:
Date: February 26, 2004 Location: Pisco, Peru
Summary: 3 VERY BRIGHT OBJECTS IN THE SKY
Date Posted: 3/16/2004 10:27:30 PM
Day/Night: Nighttime.
Duration: 10 mins.
No. of Witnesses: 6.
No. of Object(s): Multiple.
Full Description & Details
WHILE FLYING A BEAM PISCO PERU, WE NOTICED 3 VERY BRIGHT LARGE OBJECTS. THEY WERE NOT MOVING MUCH. THEY PASSED BY US AT A DISTANCE OF 20-30 MILES AT APPROXIMATE 20000 FT. WE WERE AT 31000 FEET. THERE WERE 4 CREW MEMBERS ON OUR B767-300ER. ALL NOTICED IT. THERE ALSO WAS A MEXICANA AIRLINER OVERHEAD THAT NOTICED THE OBJECTS AS WELL. THEY WERE TO LARGE TO BE SHIPS. THEY WERE OVER THE OCEAN. AND VERY BRIGHT. WE CALLED THE LOCAL AIR TRAFFIC CONTROLLERS IN LIMA AND THE DID NOT SEE THEM ON RADAR.
Witness Background: AIRLINE PILOT.
RATED ON B737 B757 B767.
Reported Sighting? Yes.
Reported To: LIMA AIR TRAFFIC CONTROL.
Location: MIAMI, FL, USA.
Below is an image of another epic UFO and Jet incident caught on camera but from the ground of a UFO and Jet, harrowing although it looks everyone was okay. 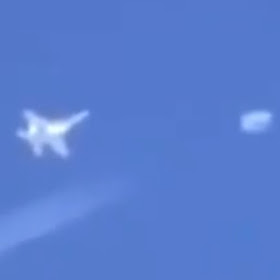 Remember that pilot's are trained observer's especially trained to distinguish bird's from aircraft's and they're especially trained also to identify any and all obstacles that might be 8n their paths. In otherword's guy's, pilot's know the difference between a bird, a plane, the Moon and other aircraft's! People put their lives in the hands of pilot's every single day. These are highly trusted individuals, I'm not starting to doubt them now!

Normally UFOs photograped by pilot's don't turn out good as they usually can't get a good look at them as they've (UFOs) normally whizzed passed their jet or light aircraft in a split second because it happens so fast. To be honest with you, the normal everyday type of UFO so-to-speak that I've noticed and looked into recorded by a pilot is a simple white ball of light. That's the normal everyday UFO Orb of white colour which I've also found are the most abundant type of UFO on this planet but sometimes they can be orange as well.
Related post
New York City Mass Multiple UFO Orb Sighting

The best ufois a UFO in the hands of Extraterrestrials because if our Government won't come forward with this information, then you can guarantee that they're up to no good with the recovered treasure trove of technology.
Lee Lewis UFO Sightings Footage.

The details of this UFO sighting are amazing. There's something that stand's out to me and it states that there was 6 people who saw this UFO encounter. That's 6 people who normally only one in maybe 10 pilot's will report a UFO sighting. Here's 6 people who are willing to stand by their own statement and say to whom they reported it to which was LIMA AIR TRAFFIC CONTROL.
It's not unprecedented but it's certainly noteworthy in my view. Pilot's generally prefer to keep their job's especially when in the past if a pilot even so much as muttered that they'd once seen a UFO even in jest, their sanity was in question and more often than not they we're sacked! That's no joke neither, it was doing the right thing especially if it was a mid air near miss which is to report any near misses in mid air. So, put yourself in the shoes of a pilot, he or she is damned if they report it and they're damnedbif they don't. Not reporting a dangerous, near air miss even with an unknown object is serious. Nine times out of ten radar picked it up so if you don't report it, you never know if your been tracked but more importantly tracked and watched because all aircraft are tracked. I'm sure an alert sounds at the radar station/air traffic control center?
So again, imagine how a pilot feels and imagine what he or she's thinking in relation to reporting a UFO? It must be awful, on one hand you believe your job's in jeopardy and in the other your reputation might be ruined. Tough choice. Luckily 6 pilot's and crew banded together because as you may know, there's strength in numbers.
Here's the quick video that I've made to give you my thought's and opinions on what I'm seeing here in this pretty reliable UFO video. The source being a pilot means that they're a trained observer and so because of this, it deserves our attention and we should give it more than the benefit of the doubt just because these are trained observer's:

Please share your thought's and opinions also any ideas that you might have about this extraordinary UFO sighting. If you could share this post with someone who think would like to see a multiple UFO video, I'd appreciate it, cheers.
Credit: The UFO Times/UFO Sightings Footage/UFO News/Canva.