Stunning Cigar shape UFO recorded on the main cameras on board the ISS (International Space Station) and it was filmed really close, it was caught on 3 main cameras just outside the space station.

I have an enormous amount of faith that Extraterrestrials exist and that they're constantly visiting the ISS. C'mon for heaven's sake, these crittersare been filmed on a regular basis to the point where it's not even news anymore! 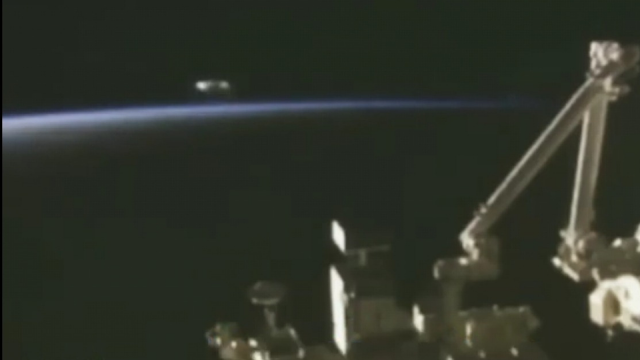 Credit: NASA/UFO Sightings Footage/UFO News/Canva.
Seriously, it's not even making the rounds while people are having tea and biscuits at 11am "elevenses". Nobody seems to be bothered by it or talking about it? Next time you see someone, anyone, a random person who walks past you just ask them what do they think about UFOs at the International Space Station? I bet you get a scowl or ignored completely, because no-one is bothered!
Related post
UFO Evidence Caught Flying Past The SpaceX Capsule
It's got nothing to do with asking random strangers questions lol. People don't talk to each other nowadays, probably? To wrapped up in what's going in their burritos 🌯 to pay any attention and also a slight chance that they're absolutely not bothered about UFOs. Perhaps people are becoming to accustomed to the influx of UFOs in an almost endless stream - especially when it's the ISS Live feed UFO encounters.

Credit: NASA/UFO Sightings Footage/UFO News/Canva.
But, luckily I'll never lose interest, it's larger than anything historic, it's to important to become disinterested with it. Imagine for one second this scenario; you wake up from a bizarre night's sleep and overnight Extraterrestrials have been on the TV in a joint press statement with the US President, they're just likevus with hopes and dreams and they hope to work together on the fundamentals that make up the universe blahdee blah.
How many self appointed experts do you think would instantly have all the answers even though just the day before they "couldn't be bothered" about stupid Aliens and UFOs? Oh believe me, these people are out there just waiting to pounce on the Alien subject and when ET does give a joint statement with the US government, you just watch out for all the experts that'll all come out from everywhere... lol!

Credit: NASA/UFO Sightings Footage/UFO News/Canva.
Anyway, rant and rave over with (I'm sorry for that, it's glandular). This UFO appears to be white in colour and that could be confirmed as man made or not if only a laser was pointed at it, we could measure the chemical compound composition and know if commonly used white pigments are present which could include Zinc White, and the main one Titanium Dioxide, Zinc Sulfide, Lithopone, Alumina Hydrate, Calcium Carbonate, Blanc Fixe, Barytes, talc, silica, and China Clay. ... The white pigments listed above are classified and listed, all in the Society of Dyers and Colorists' Color Index as identified in the PrintWiki website.
Trust me, the argument would last all of 2 minutes because if any of the chemicals listed above appear after been "lasered" then it's irrefutable evidence that Aliens are working together with humans or it's a man made craft and exclusively used by humans? Alien's being well, Alien's would probably bring their own spaceship 😆 so it stands to reason that maybe another chemical if at all a chemical compound would be used? Earth is Earth with it's unique building block's with it's own unique chemicals and elements and the Extraterrestrials would hail from another altogether different planet which would undoubtedly have it's very own unique chemical compound compositions and it's very own elements too.
NASA knows all this, most people know this because it's a bushel full of common sense  right... Or is it all hocus pocus and there's no such thing as UFOs and Aliens and the "Cigar shape UFO" in this video of photo's is showing nothing but space junk, debris from an earlier NASA mission perhaps? Anything plausible that goes against the ET answer.
I want your thought's on this UFO encounter at the ISS, have you seen a similar one or have you figured something out about this UFO sighting? Is there something nagging at you about it's shape and does it look like another UFO, can you place it somewhere else besides here maybe? If you can and you think it's worth mentioning then please leaveca message for us right here, comment on this post and let the full world benefit from your thought's, cheers.
YouTube video description:

The broadcasts that are being cut live are being spectacular when something strange appears, why? why does it have to be? many #anomalies in a short time and very #impactantes, the satellites of Starlink 5G? everyone talks about it but no one clarifies future consequences, UFOs furling around the #Earth and the astronauts of the ISS when they perform tasks, an endless number of images that really provoke us even more curiosity, what explanations does NASA give us? Few or no official explanations of while we will continue expectantly to the direct of the ISS.

So, okay the translation was not the best but that's exactly what it says so I'm not changing anything because that would be tampering with it. Anyway without further ado here's the exceptional UFO video courtesy of NASA Live feed videos from a few different angles and a few screenshots.
There's actually some other great UFO incidents in this same video here:
Please share your thought's and opinions also any ideas that you might have about this extraordinary UFO video, if you could share this post I'd appreciate it, cheers.
Credit: NASA/UFO Ovni Error 404 J.R YouTube Video/UFO Sightings Footage/UFO News/Canva.