UFO Filmed on Live TV During The Day Blatant And Big

This UFO was caught on Live TV during the daytime and it's a spectacular UFO filmed going from the right to the left. Russian UFOs seems a lot better.

This is a spectacular UFO filmed by Russia Today (France) News Outlet on Live TV while the anchor was talking to a guest.

This UFO has big and blatant ideas about what is acceptable in the modern world. Going on Live TV during the day isn't acceptable because it confuses the masses of people who then start arguing about if what they saw, really and actually exists! 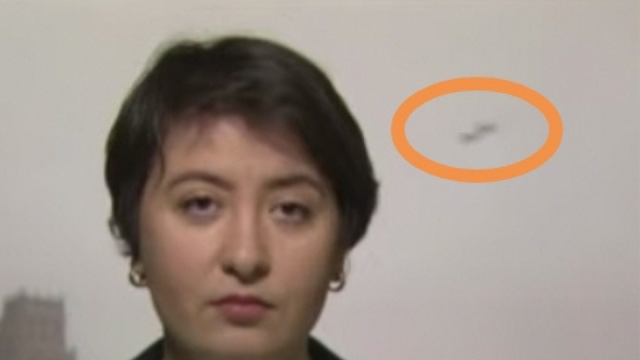 Obviously a UFO flying around a city of Earth means nothing to this pilot and that's if it's Aliens in the first place? It could be a top secret aerial vehicle created by the Russians or it could be a private group creating exotic aerial vehicles, it could be subcontractors working with or for the Government or personal but powerful individuals? 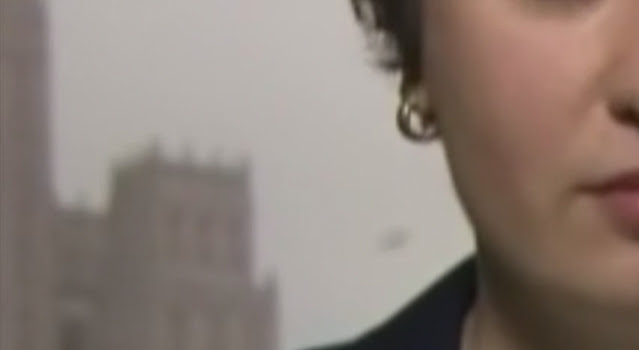 The UFO is seen on the live TV during the day and so the snapshot from the video is put through a filter and shows up even better. It's kind of like a Cigar shaped UFO but the top of the craft looks uneven so I don't know what to make of it, do you have any idea what it is?

Let's hope it's man made because if not then Extraterrestrials are becoming bolder and it shows that it's got no second thoughts about flying through a city in the daylight. I honestly don't know if that's a good thing or if it's a bad thing flying around a city in the daytime? 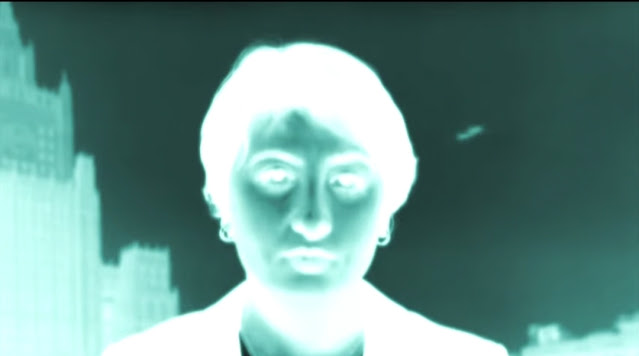 There's more than likely and probably, no way of knowing what it's primary function is i.e spying on humans or if it's just getting people used to seeing a UFO on a daily basis? But I'll tell you now, I'd like to know big time who created this UFO right at it's origins as anything is possible, right...

It (UFO) comes into the screen from the top right corner and it speeds down towards the bottom left hand corner of the screen going between the guest's shoulder and a large brick building which is (I presume in Russia) one of the largest brick buildings in the area?

Russia Today hasn't scrapped the UFO footage in fact it's on their RT France YouTube channel. The video below is an English narrator version of the UFO video with the anchor and guest speaking in French but here's the link to the original video on RT Frances YouTube channel in French.

The Finding UFO YouTube channel is by a guy called Rico. I hope that you enjoy the video nd if you can share your thoughts on the UFO I'd appreciate it. Also, please share the post and let's try to get some answers to what this UFO is.

Let's get UFOs out there, there's no stopping disclosure of Aliens and the crafts that they use. When the Government thought area 51 was going to be stormed they probably moved the Alien beings into a secure transit system and locked down the facility. The normal workers were replaced by the military and satellites were directed to the area 51 site. The microwave weapons were turned on and the place was invisibly impenetrable! Mines, remotely operated automatic weapons systems were already in their places.

It's a very, very good thing that nobody penetrated the inner Chambers, the inner perimeter and the fields of boom around the Area 51 location. Do yourself a favour, stay a blooming way from it. It's just not worth losing your life, they've already got authorisation to put you down if you step just one foot in Area 51 land.

Keep on putting 2 and 2 together with UFO sightings and we'll get our Alien disclosure! We've already had UFO disclosure in 2019 albeit UAP but that's just word play. So, the only thing we need now is Alien disclosure because that's the most natural next thing.