The Sun released a massive X-Class Sun Solar Flare which are loops of plasma. The Sun can wipe out life on Earth if conditions are perfect no problem.

On April 21st at 0157 UT, "which would be just earlier on today" Earth-orbiting satellites detected a strong M9.6-class solar flare.

In other words, get yourself ready for the possibility of the radio maybe having a wee bit of static interference? Now if we was a bit closer to the Sun, yeah we'd be toast! I'm talking about no scraping off the burnt bit's of the toast with extra butter to cover up the taste. This is a bad thing! 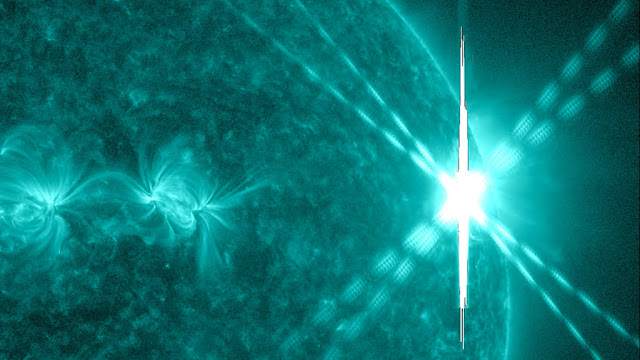 Sun Solar flare's are massive emissions of energy blasting outward from the Sun. There's literally no way to describe or show you a visual aid of the destruction power's that this X-Class Sun Solar flare would cause on a planet like Earth if it was closer to the Sun. It would be bad, it'd be terrible consequences on every living creature on Earth.

The source was sunspot complex AR2993-94, which is almost directly facing Earth.

This is a really bad solar flare which was directly facing Earth. Loops of solar material called plasma literally leap off the sun's surface and expand to 10 times the size of Earth.

The smallest ones are A-class, at near-background solar activity levels, followed by B, C, M, and X. Similar to the Richter scale for earthquakes, each letter represents a 10-fold increase in energy output. So an X is 10 times an M and 100 times a C. Within each letter class there is a finer scale from one to nine. Although X is the last letter, there are flares more than 10 times the power of an X1, so X-class flares can go higher than nine.

Huge UFO Sighting At The Sun Nicknamed The Death Star

Giant explosions leap off the sun's surface with the power of a billion hydrogen bombs.

The largest explosions in the solar system get rewarded for their sheer brawn with a fitting, sci-fi-sounding name: X-class. Made visible to us by sun-observing satellites, these solar flares are awesome to watch. Loops of solar material—called plasma—leap off the sun's surface and expand to 10 times the size of Earth. The biggest flares can produce as much energy as a billion hydrogen bombs.

Here's a couple of fantastic videos from NASA's own website which are free for anyone to download as long as you give them credit for use of their videos and photos. This is a couple of videos showing an X-Class Solar Flare:

Above:
An X-class flare bursts from the sun on Aug. 9, 2011 as seen by NASA's Solar Dynamics Observatory (SDO) satellite.
Below:
Powerful X-class flares create radiation storms that produce auroras and can give airline passengers flying over the poles small radiation doses.