Estimated at 60 miles above the earth or Moon astro photographer Andrew McCarthy if orbiting the Moon at 60 miles these craft's individually have to be at 2 to 3 miles wide!

If these unknown origin craft's are real and they will have to be 40 times the size of any known object in Earth's orbit with that only being the International Space Station. This video was filmed in May of 2019 from a Moscow rooftop which is in Russia. The eye witness struggle's to get set up and focused in on the actual Moon but out of nowhere and all of a sudden he's spotted 3 black circles (or dot's) to be honest, that's what I am seeing. But again, all of a sudden there's a "bazillion" of these UFO black dot's to which the eye witness actually thinks there's an Alien invasion happening... He actually shout's it out! 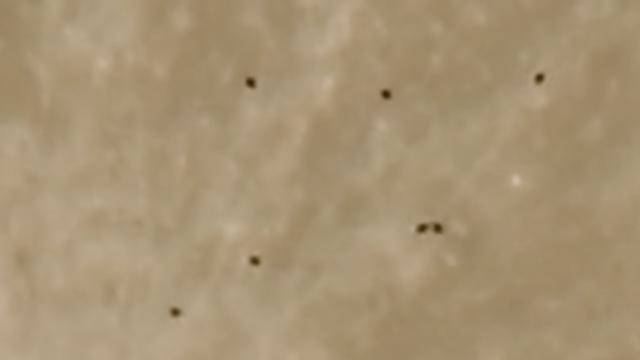 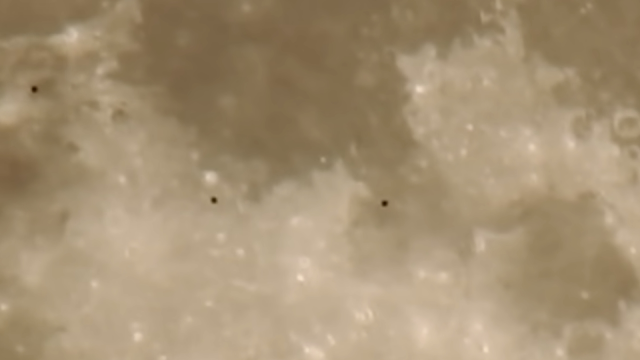 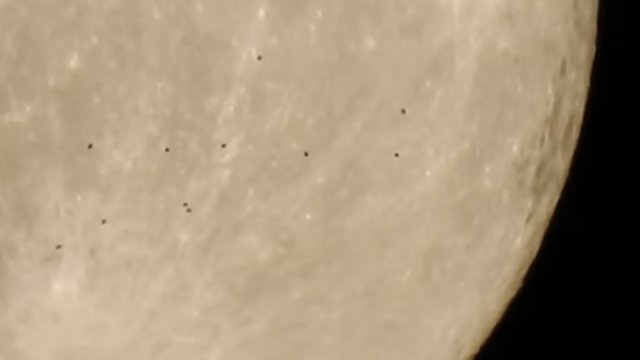 The astrophotographer Andrew McCarthy (the TV show expert) on "The Proof Is Out There" asks who or what company or Government would be capable of putting a super structure this size in to space especially into a 60 miles above the Moon's surface type of Lunar orbit?

Then there's a lot of strange talk about these been Bird's which is ludicrous (and they know it) because it's been established by an astrophotographer of their own choosing that these are 60 miles above the Lunar surface and unless the bird's are 2 to 3 miles wide and fed on bulking agent's, well it's simply ludicrous. If you notice we never get any Extraterrestrial entities mentioned or that they could be capable or even involved with this super cluster. They almost hint at it though.

No matter which language you say it in there's just nobody or no company or Government that can put a super structure into a Lunar orbit today, tomorrow or any other day come to think of it. And especially a super cluster the size of these 2 to 3 miles wide UFOs!

What can we rule out based on size alone? Well actually the answer to that question is so simple because it's everything. The answer to what can we rule out? And yes, the answer is definitely "everything" because satellites aren't 2 to 3 miles wide or the ISS come to think of it, and the Soyuz isn't anywhere near the size we're looking for. And there's most certainly nothing orbiting our good, gracious and beautiful planet Earth like comets, meteorite type boulders or any smaller Moons. Even the James Webb telescope isn't anything near the 2 to 3 miles wide range that we are talking about.

A photographer in Moscow, Russia is left moon struck when he spots a mysterious cluster of black circular objects, in this clip from Season 2, "The London Serpent and Moon UFOS."

So it just leaves... Drum roll, UFOs. Unidentified Flying Objects in a large super cluster of space craft's all headed in the same direction. Guy's it's time to get your thoughts put down in writing and leave a comment in the comments section below because history is going to read this and let's show them that we saw this lot coming and our eye's have been open for a long time!

Here's the astonishing footage which was uploaded to YouTube by History Channel:

Please can you share this post with someone who would appreciate it, thanks. Also would you consider leaving a comment in the comments section below, cheers.