UFOs In A Row Filmed From Inside Of A Plane

Here's the extraordinary video which shows us a UFO sighting filmed by an airplane passenger through the plane's window. It looks real to me.

This video caught my attention because it's the UFOs that are in a row and shining like it's either a reflective surface or it's the UFO itself radiating light.

There's a lot of UFOs been filmed from airplanes and pilot's who see them and film these UFOs.

They never got accepted before but recently thing's have progressed a lot and changed for the better. 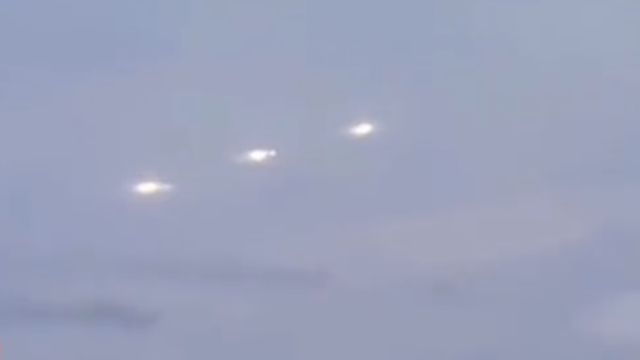 We see 3 UFO Orbs in the video that are hovering, literally they're lights or craft's that want to be noticed big time. Why would UFOs want to be noticed that bad? It seems a bit counterproductive if you ask me? Unless it's a UFO version of a "hidden in plain sight" conspiracy but they just can't get it right? Does it make sense to you that a UFO flies all the way to Earth just to put it's high beam on and then run away when we go out to look at it or film it? That's what the "Big Feet" thing did in the video when it stops to look around, lol. It seems stupid actually when we say it like that? You know, how it is? How it actually is! It's like a giant game of chase me, but don't catch me... See, stupid.

It's a truly strange video and I know that someone will see this and know what we're looking at here? Unless you can see it's a giant game of chase me as well.

"Three white UFO orbs filmed over Alabama in the US"

The video here shows three strange white UFO orbs floating in the sky just hanging there as if they're on string! The objects were filmed from the window of an airplane above the clouds. The objects don't seem to move at all.

Several videos were uploaded to youtube showing what looks like the same 3 white orbs flying together in the sky. Don't quote me on it though, because UFO Orbs inherently look exactly the same as each other. According to some sources, these orbs are quite common and believe me they are because I've personally been inundated with emails, Dam's and WhatsApp messages regarding UFO Orbs especially the white dot types. The reason why they are flying together is unknown. Some people online in the forum's on UFOs believe that these are top secret military aircrafts that noone knows about. It's kinda ironic because in theory, they shouldn't be talking about them if it's top secret aircraft's that nobody knows about, right? Other's say that they are extraterrestrial spacecrafts which is always a plausible explanation. But what do you think? Are these mysterious orbs from another planet? Let us know in the comments section below.

The video shows three white orbs flying in formation supposedly above Alabama. The person who filmed the video stays quiet and doesn't say a word? The eye witness captured the video on his/hers cell phone, which they used to film the objects through the airplane window.

When we see a flying orb, the first thing that comes to mind is an extraterrestrial craft, right? However, it could be an advanced drone or a new secret airplane or even a satellite drone capable of manoeuvring just like the UAP Tic Tac shaped UFOs that was released by the US Navy on behalf of the US Department of Defense DoD or the US Government. In any case, we certainly do not see it very often but is that the right explanation for what we are seeing here? One day and I hope it's blooming soon that we know for sure because I'm blooming sick of guessing what the UFO is everytime there's a sighting! I just wanna know one way or another.

A passenger captures three luminous objects in formation and apparently static from a commercial plane.

This plane is at the right place at the right time so that the eye witness was able to film 3 UFOs that was just hovering in the sky above the clouds by all accounts near Alabama in the US.

Maybe it's a row of white UFO Orbs, maybe it's a top secret row of crafts with the worst disguise possible. They stand out a mile, actually probably 20 miles or more so the top secret part's maybe an exaggeration. Are they from Earth, are they from another planet?

The fact is there's a lot of stuff on this planet that we just don't know much about or what they are? And I'm cool with that. Because one day I know that we're all going to know for sure what they and others like them are - which means exactly what it means.