This UAP Tic Tac shaped UFO was filmed by a pilot of 25 years just south of Sand Beach in Arcadia National park on June 20th in 2022. Jet's chase UFO.

The Tic Tac UAP's strike again and this time they was filmed not by the Jet pilot's but by the public in Maine.

These Jet's screamed past a park in Maine with the camera rolling and it was captured by a teacher who was on holiday with her family and her dad's a pilot of 25 year's who was also quoted as saying: 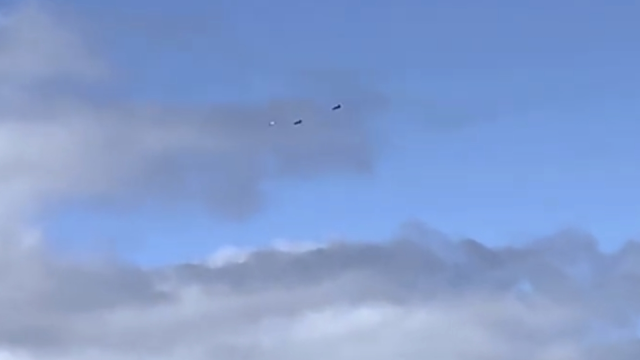 "My kids and grandkids saw it and then heard it. My daughter got her phone out and on and pointed in the right direction but couldn't tell if she was getting video of it. "She stopped when she couldn't see them any longer." It all happened so fast, "You can hear my grandson say he likes jets. Everyone thought the white thing was another airplane until I looked at the video." "Up close and personal. I don't have a clue what those jets in my video are with but I do know it's not another fighter jet. "I also know it wasn't faked. For what it's worth, I was an airline pilot for 25 year's."

I think it's a good thing that the US Government has released the UAP videos to the public because just like with this UFO sighting, we'd be spinning our wheel's asking what is it or does anyone in the air force have any clue as to what these are and is it a training excercise? But now we know that it's not a training day for the jet's and in any way it's over a public built up area so I don't think that this is a good place to be perfecting a dog fight with an unknown and possibly (more than likely actually) enemy, exotic technology...

See, it also helps out the air force because there's people in the air force that have a strong sense of honour and duty, their loyalty to serving America, the people! This is paramount and they must have a belief that the people need to know that there's a very, very strong possibility that the Earth has uninvited guests! It sounds profound when it's written down but I can assure you now that there's no other way to describe it other than it being "uninvited guest" and hence WE ARE in trouble and that's why they've got a double tail convoy of Americas finest matching it's every bloody move and I tell you now, rightly so! If these jet's are in hot pursuit of the UAP you can guarantee it isn't because it's on a sightseeing tour guiding the guest to sightseeing hotspots! They would, for starters would be kept away from built up areas if they (US Government) was in control of the flight because the US Government couldn't guarantee that the safety requirements for such Aerial manoeuvres could be maintained by the "visitors" as there's no information on the effects in Earth's atmosphere? It sounds very official, but I'm talking about if this was a controlled flight! So that's for starters, and if the Government did know, they'd be kept away from eyes on by the public.

Video description:
Fighter jets chase UFO over Atlantic on June 20th 2022. Tic tac UFO disappeared into clouds above Military jets. My daughter sighted these and tried to get the camera turned on and pointed in the right direction. Video was shot in Acadia National Park on June 20 2022 just south of Sand Beach. There were dozens of people with cameras in the area. Someone else may have taken a better video.

All point's of view paints a bleak picture that these are unwanted guest's and I don't know how I feel about that to be honest? Everytime I add safety, training, exercises, manoeuvres, roll playing, dog fight scenarios to this (even with my limited knowledge) everything point's to these Tic Tac shaped UFOs being here without "our consent" and it's this one which makes me most nervous I'll be honest.

Here's another one off the top of my head:

So no matter which way we or I look at this, all signs point to uninvited guests and even if the US Government has hinted this, I want to prove that these are uninvited guests! It's one thing for the government of the US to "hint" at such a thing, but it's definitely another thing to prove it. Politics revolves around wiggle room, wiggle room to interpret answers, wiggle room to imply something else and definitely politicians love to have a get out jail free card or in other words, they like to say 9ne thing but mean another and you'll find that in a lot of speeches given by most if not all politicians speeches throughout their reign of terror! I mean tenure.

Here's the video of the whole incident caught on camera by the eye witness and family in a park in Maine:

Please share this post with someone who would appreciate this, thanks. Leave your thoughts and opinions below in the comments section, cheers.

If you'd like to know more about this check out Metabunk, they're saying it's a white and blue Jet and can provide a visual aid referencing a flight path... I'm not convinced though even though I have to admire the work put into it, it's just there seems to be 2 arguments on the same page. It's not there because of the UFO disappearing from video frames, but then it is there because it's a Military white and blue Jet with the flight path recorded and the screenshot is added to the page... So it's very confusing as a page and as UFO research in whole. It's a Tic Tac, the disappearing is explained by the fact that it can disappear from sight and flips into the Infrared spectrum, that's why the initial 3 UAP Videos are in black and white, because it's all filmed in Four which stands for "Forward Looking Infrared." Personally, we're lucky we saw what we saw. I believe the hundred plus eye witnesses that it was there and the pilot of 25vyesrs and his family with the video as evidence.

That a lot of first hand evidence that has to be dismissed just to put an opinion in place and they wasn't even there! That's, well I don't know what that is but it's certainly not UFO research. To dismiss everything that is put forward by the eye witnesses and actual physical evidence, for your opinion! OMG, that's just up your own ass! But, don't dismiss it outright on my say so, go follow the link and remember to keep all the evidence in front of you at all times because it's easy to get caught up in a UFO dismissal page. Check out the Mirror as it was featured there also.

See the thing is, if you suggest that the video looks strange because the object disappears with a "why is that" your instantly calling the person who filmed it a liar. You question anything else, they're all liars. So Ufology really does bring out some big feelings.

Personally, I go with the word first and foremost because it's a truly no win no situation so it's not worth questioning without there been horrible back and foorths, so I avoid this. Plus it's not my job to question the legitimacy of the eye witness, I'm not a judge.

I weigh up the evidence with the word, the information that I already know and there's the peripheral opinions, suggestions, evidence from armchair sleuthing teams of which there's a billion of them. They point out a lot of great, fascinating and downright absurd things.

I put it all in a sock give it a jiggle and pull out the answer. Well, not quite what I'm trying to say is that there is no right or wrong answer, there just isn't. So believe it or not I tend to read a lot, a hell of a lot and I make a decision on what I believe. I don't judge nobody and mine own opinion is my own. Take it with a pinch of salt. The evidence is there, it's make your mind up time and be nice, it costs nothing.

My deciding factor on this:

This pilot of 25 year's I don't believe would highjack a family vacation to promote a lie for his own end's, do you? No.