There's a reason why I think that this is maybe a hoax because I get a funny feeling when I see it, in my stomach. That's called a gut feeling!

Okay I'm showing us this UFO sighting because I'm not sure what to believe to be honest with you, so I'd like your input please?

Apparently this was filmed over Frankfurt in Germany. It's from an eye witness at a truck stop who was randomly filming the rims of his truck (as one does in Germany) keeping it local I suppose? So, he looks up into the sky with the camera and notices a UFO sat there minding it's own bee's wax (business). Then after a couple of seconds loitering on the UFO Disk (or Flying Saucer) we can hear a loud noise like a fighter jet would make. I'm pretty sure that everyone has heard one of these desth machines they're everywhere. 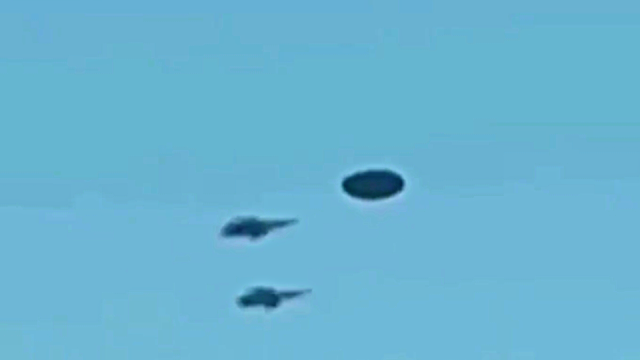 Although the only purpose of a jet like tiis is carnage, desth a d destruction, this couple seems to be flying right at the UFO? I'll have to admit that they do seem to be making a presence known and maybe even chasing the UFO off from the area? There could be a sensitive Military base in the area and instead of just getting on the UFO equivalent of a radio, they need to show a force of strength. That's when the UFO tilt's itself sideways as if to say to the eye witness "did you call them because I'll be back to deal with you".

And with that, it's off!

I'm actually going to be going on record now and state that I have my reservations about it? It's only based on my gut instinct, my gut feeling or whatever you want to call it? But there's something about it that doesn't actually sit right?

Maybe it's the sideways tilt of the Flying Saucer when the Jet's have just flown by and passed this seemingly real (till thst point anyway)? There's something about that tilt of the Disk that really doesn't look right to me? It looks fake as hell, like it's been deliberately manipulated in a 3D program and the lighting is not correct, I'm not a graphics expert but I've been looking tgrough these eye's all my life and that doesn't look right!

But that's not enough to say it's a fake because even real things sometimes, especially in a different lighting set up can look shabby or unreal?

If your an expert in graphics and you can do something with the evidence collected here then please do so and if you can post your results in the comments section below, I'd appreciate it, cheers.

Please leave your thoughts and opinions on what you think of this video, cheers.