A guy in his yacht was stunned when he filmed a group of UFO Orbs over Normandy in France. He says the UFOs were making the chemtrails disappear.

Okay, the more I'm writing about UFO news specifically more about UFO Orbs, it's impossible for me to ignore all the similarities which keeps on cropping up time and time again.

What I'm looking at here is this fleet formation of UFO Orbs which seem to be controlling chemtrails over Normandy. Even the eye witness confirms this as his suspicions also. He's filming all this from his yacht in Normandy in 2014. I'm posting all of his written statement at the bottom of this post. 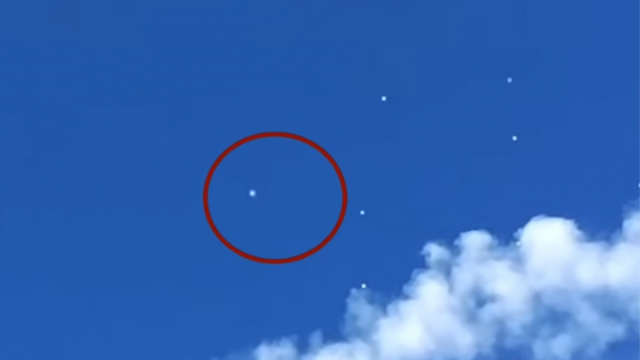 Credit: WTFflow YouTube video/UFO Sightings Footage/UFO News/Canva.
As I'm writing more and more about UFOs, the accumulation of UFO knowledge I feel gives me an edge? I've seen UFO Orb formations before and I really get the feeling that these ones didn't or haven't anticipated that they'll be filmed on that day? Okay there's no way of knowing that for sure but, it's in Nebraska and over water, it's in the middle of nowhere and that's why I think these White UFO Orbs didn't anticipate any bystanders filming their every move. 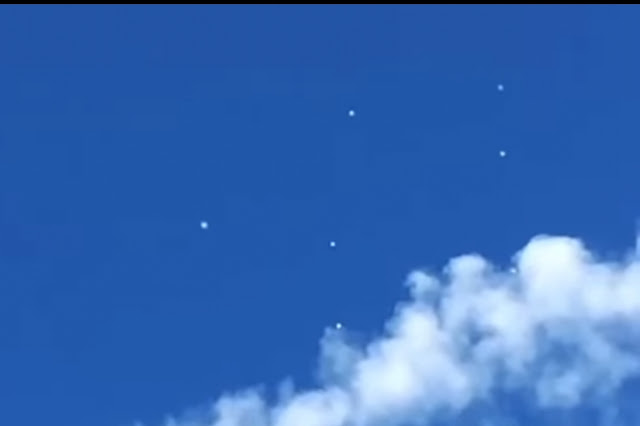 Credit: WTFflow YouTube video/UFO Sightings Footage/UFO News/Canva.
These Orb UFOs seem to vanish at one point with the front leading UFO actually flashing very brightly at one point. On some unknown cue, all the Orbs head into the chemtrails and they vanish for a while. That's strange, in fact I've written about a very similar event before, when a lone White UFO Orb was making a very white and long chemtrail eventually vanish.
It was almost erasing the white chemtrail as it moved through it. What's their involvement with chemtrails do you think? Are they targeting the worse kind of chemtrails or are they just erasing any chemtrail that these UFOs come across?

Credit: WTFflow YouTube video/UFO Sightings Footage/UFO News/Canva.
Out of all the many different places that these UFOs could be, why Normandy? What's important enough for a whole fleet of UFO Orbs to be there? Is it back up? Are they backing each other in numbers or what they are doing, does it need all of them? Was they anticipating a confrontation with the an Air Force maybe just like we saw in the declassified UAP videos and as a point if observation, these UFO Orbs look very similar to the UAPs? That's a fair enough assessment I suppose because even the Tic Tac UFOs looked more like UFO Spheres.
Related post
43 UFO Orbs Gather in Formation Over Mountain
But the UAP UFOs couldn't be seen unless they were filmed in Flir (Forward Looking Infrared). That's the only flaw to that opinion. But I suppose there's the possibility that Extraterrestrials could have a whole category of of UFOs, a catalogue so-to-speak? Different UFOs with different capabilities maybe? If there's 7 UFO Orbs in this fleet then there could be a lot more elsewhere in an underground base somewhere all with dedicated capabilities. That's actually quite scary...
Here's the extraordinary and absolutely amazing fleet of UFO Orbs in action:
If you can share this spectacular fleet of UFO Orbs caught red handed possibly tampering with our atmosphere, then I'd really appreciate it, cheers.
Eye witness statement:
09/12/14 - I was on a yacht with a friend. We were sailing together, enjoying the beautiful blue sky in Normandy. I was watching a huge Chemtrail and some nice clouds while taking a sunbath, when my attention got turned away by something else (I don't remember).
I stopped watching the sky for some minutes. When I stared at the sky again, I slowly noticed some strange little dots of light near the huge Chemtrail. As always, I got my iPhone in my pocket :-) So I immediately took it and recorded what I could. After checking on my PC screen, I counted seven white objects slowly descending inside the trail, and also disappearing behind it. It seems the huge orb is the mothership "leading" the fleet.
I have 3 hypothesis: - These are parts of meteors falling down. (rare phenomenon in daylight!) - These are spy drones / military devices, controlling - watching the trails (maybe to analyse them) - These are UFOs - unidentified flying objects - controlling and monitoring these trails.
What do you think? I'm pretty confused on this one. This type of sighting is pretty recurrent where I live, I've been seeing these thing hundreds of times, and sometimes I could record the most impressive ones.
Type Lights
Scale Unknown
Duration 45 seconds
Color(s) White
Light(s) Yes
Speed Slow
Filmed with iPhone 5S
Filmed by me from the sea in Normandy, France, September 2014.
Credit: WTFflow YouTube video/UFO Sightings Footage/UFO News/Canva.