Here's a great example of been able to narrow down the information and make a decision based on what the UFO looks like. It's not a Meteorite at all.

Meteorites have a burning up orange glow to it so that's why I have decided to create a quick post about this obvious UFO.

Maybe it's using the Earth's gravitational pull to slingshot itself faster into a certain direction going away from Earth? As far as I've known Meteorites burn up in our atmosphere usually until there's nothing left to burn but that energy is expelled as an orange coloured trail left in it's wake?
Whenever a bit of NASA rocket debris or a piece of space rock hits our atmosphere it should burn up in theory, right? Burning up in Earth's atmosphere has always given off either a yellow-ish or orange coloured glow with some fire only seen through NASA shuttle windows. The point I'm getting to is that this is a totally different colour, it's pur white which means it's something so different to what I've just mentioned! So, let's assume it's a space rock then NASA must know about it. If it's rocket debris then NASA must know. 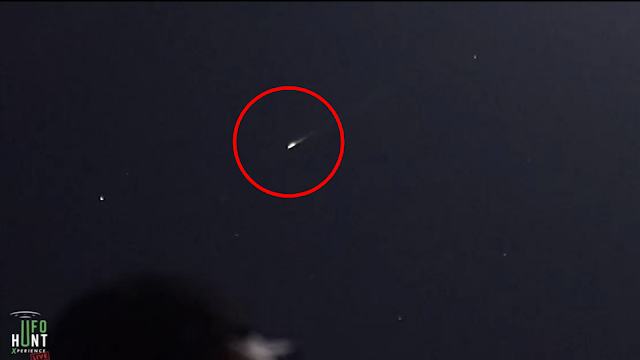 Credit: UFO And Ghost Hunt Xperience/UFO Sightings Footage/UFO News/Canva.
That's pretty much common sense and as I can't remember the last time I saw a white flame, can you? I've seen white hot metal before but most definitely not a white flame! Which, in the UFO video it's either leaving a white trail or it's just going so fast that it's blurred on playback of the video and that looks like a trail to me?
Either way it's in favour of this "not" been a UFO. Instead though we have to look at what else this is that is proper gunning it past Earth like a maniac!
Related post
Cube UFO Falling From Space
Personally I'm sticking with a real UFO because it's white when it comes into view and it stays white on leaving our view which points to this always been a white UFO and not just because it's entering Earth's atmosphere. So, that's yet another thing that's supporting the idea that this is a real UFO. Everything from the first word I've written here is all common sense.
Related post
The Most Unusual Triangle Wing Shaped UFO Filmed Over London UK
There's no stretching of the imagination and no exaggerating the information. It's a "you get what you see UFO" which I like the self explanatory UFO sighting's because even though they may at first look like something else or resemble another altogether different entity, if we scale it back and look at it's literal basics we see it for what it is. It's a bona-fide UFO.
Here's the actual video which I came across on LinkedIn. Check it out in this link or watch the video here:
Please share your thought's and opinions also any ideas that you might have about this amazing UFO sighting filmed by amateur astronomer and Ufologist, which takes impressive astrophotography photos. His skills are listed in the UFO video description on the YouTube channel. If you like live UFO hunts then have a look at this channel, it's pretty cool. In fact I think he's got a few channels separated into Ghosts, UFOs etc.
Also I'd appreciate it if you could share this post with someone who you think would appreciate it, cheers.
Credit: UFO And Ghost Hunt Xperience/UFO Sightings Footage/UFO News/Canva.