As far as helicopter and UFO sighting's go, this one looks absolutely spot on. There's lot's of way's that a UFO incident can be verified by anyone.

When the eye witness films this helicopter checking out a large black Flying Saucer he or she zooms into it, the UFO blurs and focuses just as it would if it really was there.

Equally real is the helicopter because this is also conforming to the exact same bluring as the Flying Saucer especially while it's moving and refocusing just like a digital camera would do while adjusting the focus. So the equal bluring and contrasting plus the sharpening of the objects on the screen is looking like it should, to me anyway's. 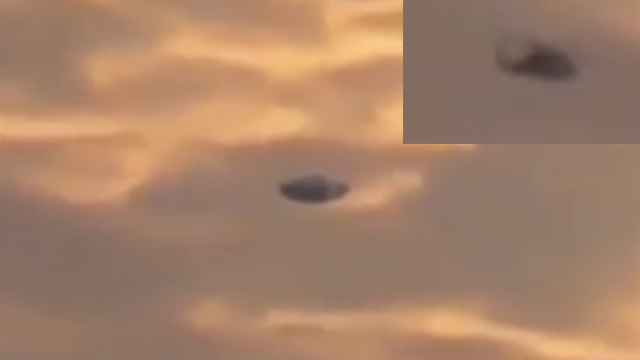 Credit: UFO News YouTube Video/UFO Sightings Footage/Canva.
I'm inclined to say that this is a real UFO video with real objects that the camera is trying hard adjusting the focus of which looks very normal to me. Also adding onto that, when this quite large Flying Saucer actually shoots upwards, the video only blurs where the UFO was and it constantly blurs all the way upwards in a kind of stuttering motion which definitely looks normal. 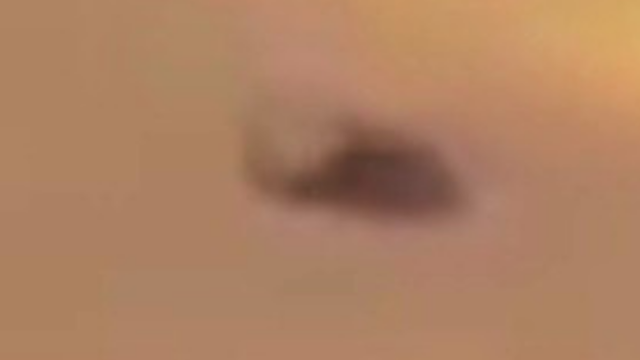 Credit: UFO News YouTube Video/UFO Sightings Footage/Canva.
See, as far as I know, when a UFO sighting is faked because it's not really there, it's a completely smoothe CGI and it's sharply focused right as an object just like it was a graphic but inserted into a video. A graphic is either sharply focused or it's half invisible which it can only be one or the other, right it can't be both at the same time? It literally cannot be 2 things at once because it's digital. It would need 2 seperate graphics and I honestly do not see that here. I don't see any halos or any of the classic copying and pasting of graphics. I certainly don't see any sloppiness in terms of it been a "definite fake because it's shoddily created". So, it's either fake and someone is using extremely sophisticated software I haven't heard of or it's real... Don't forget though, I'm no expert - I'm just used to researching one specific thing which is UFOs.

But as you more than likely know, computers get better, software gets better and the once solid line between what was a CGI UFO and a real, tangible object is now a blurred line.

Oh sure, there's definitely more than one way to check if a UFO sighting is real and there's lot's more ways to forensically research any video to check for that tell tale sign that a UFO incident did not take place or that there's a "high probability" that something was added to a supposed UFO video. It can be halos around UFOs, snipping looks off, glitches, superimposed objects slower or faster because the layering is off etc. And that's literally just a few ways of checking the validity of a UFO incident supposedly caught on camera.
Related post
Blacked Out Military Helicopter Escorting 3 UFOs
There's the metadata, there's the story itself and then there's the radar confirmation, air traffic control, military bases conducting exercises and other people actually catching the very same thing on camera but from another angle possibly even another town or city over?

So yes, there's actually quite a lot more thing's that can verify I'd a UFO sighting is real or genuine come to think of it. There's a big difference between real and genuine.

Unfortunately guy's, I think the ratio between real UFO sighting's and fake UFO sighting's are high but in favour of the fake UFO videos. This one for me though has a ring to it so-to-speak and it seems like there's every chance that it's real? There's a ton of UFOs on YouTube which have full stories, full back up and verified in many different ways but at least the majority of these are at night and a white light Orb. Boring in otherword's and as much as it bothers me to say that, well I've written a ton of these strange it's the same nearly word for word. Not in a bad way it's just "it's nighttime, it's an Orb, it's a white light, it's 3AM and that's it.
Related post
Silver Disk Is Filmed Flying So Close To Jet It Can Be Touched | I'd Be Paranoid Though
Now, let's take this UFO encounter that I'm writing about right now, here in this post - it's absolutely awesome right! A dark helicopter is flying over to it "who's in the helicopter" how did it know it was there? The helicopter flies over to where the UFO was and it stops near enough exactly where it was. It looks like it came over to check it out. These are exceptional signs that this UFO incident actually took place. I'd rather write about these types of UFOs than the Orb lights at night, anytime.
It really doesn't matter if there's hardly anything by way of the story because it exists, we can figure it out from there. Like I said earlier, technology has moved on so fast that software and CGI, graphics plus video editing skills have all moved on but just as equally, so has video forensics and I know there's someone out there that can definitely help make the call one way or another and that's why I write about this unbelievable kind of UFO because I'm hoping to bring that expert together with the UFO video and get us all the answer's one way or another! Of course I won't just accept it as fact from anyone, even I can turn around and say "yes it's fake, I'm an expert and I've checked it, the computer said no".

There's a reason why a UFO sighting would be rendered fake, talk us through it. Lay it out on the table, show us why you got to the conclusion that you did? But I also understand that it takes an expert and experts are few and far between and even fewer are the ones willing to look into a UFO sighting and even fewer are the experts willing to do it on their own dime or time.

But, I'll never give up, I'll also gain the skills needed myself over time which is something I've been doing for a long time. That's why I post UFO videos that have potential to be real. But also, I've learnt not to judge all of the UFO sighting's myself because I'm no expert. We all do it, pecan take one look at a UFO video and tell you with complete confidence that it's real or fake?

Well, I know that nobody has that ability. Nobody at all, unless they're Alien entities.

It's so easy to confuse an opinion with fact and I was lost in this myself until I thought why not take time to actually look into them? Then at least I'd have the confidence in what I say and it won't be based on "2 seconds watching a UFO sighting on video".
Here's the actual YouTube video of the helicopter flying up to the Flying Saucer which takes off vertically up out of the atmosphere:
Credit: UFO News YouTube Video/UFO Sightings Footage/Canva.