This is a fantastic UFO sighting that's just happened today, it was filmed while a top Colombian TV Presenter and celebrity waited for his airplane.

Okay so this UFO is literally hot off the press, it's only just happened by the looks of it while a top Colombian TV Presenter was filming an aircraft coming into land at Bogotá International Airport.

As you can imagine Colombia is going crazy about this UFO incident it's a well known celebrity TV presenter called Cesar Escola who is loved by the Colombian people. Some of the main news outlets in Colombia have picked this up already and I'm pretty sure that the rest is gonna follow suit ASAP. 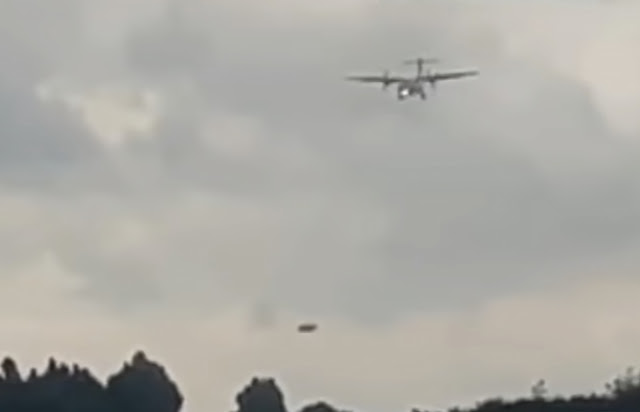 Credit: Bro Bible/Crõnica YouTube Channel/Bogotá International Airport/UFO Sightings Footage/UFO News/Samsung Photo Editor.
This image above was taken as a snapshot from the up to date UFO video which the famous eye witness filming it only found out he had a UFO on the end of the line so-to-speak (that's a fishing analogy) after he was looking through his video footage that he'd taken. The UFO is in the bottom right hand corner of the screen and it's not messing around with any stop offs or stopping to use the rest room! Not this time anyways, maybe next tome it might do but for now this speeding UFO is gunning it and as it's going that fast the camera is filming at so many frames per second so it will only take just a few photo's, but this takes the biscuit because instead of a steady stream of many clear UFO snapshots passing by in the screen, (when the video is played back but in slow motion) and for the camera to pick up a good set of photos it really needs a relatively slow or at least a decent "slower" speed for it to be picked up nice and clear.
But instead we're all treated to a really fast set of 3 snapshots!
It's going to fast. There's nothing remotely similar looking because this UFO looks like a silhouette of a bunch of cherry's 🍒 and I mean that, it really does look like a flying set of cherry's so it's a definite new one on me. Unless someone else is there with the celebrity TV star, just off camera to the presenters right and is "taking the George Michael" AKA taking the pish and throwing some cherry's past the cameras lenses then this is a real UFO sighting. 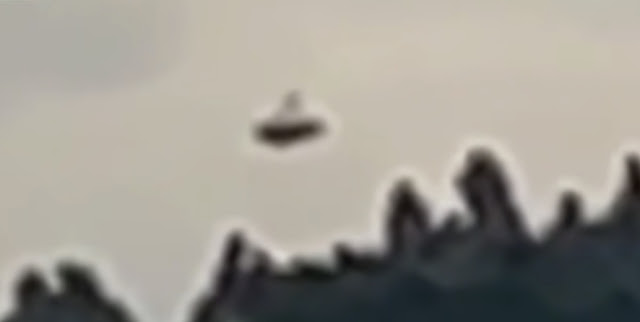 Credit: Cesar Escola/Bro Bible/Crõnica YouTube Channel/Bogotá International Airport/UFO Sightings Footage/UFO News/Samsung Photo Editor.
Bogotá International Airport was where this black silhouette of a UFO was reported from. Of course, it makes complete sense to me now as to why the mainstream media outlets have picked this up and they're making a big deal out of it, it's Cesar Escola celebrity TV presenter who is well respected so if he say's jump I suppose they will jump because it's a fellow TV presenter and yeah, it makes complete sense now.
Quick quote:

Mainly known for being a tv show host, Cesar Escola was born in the summer of 1961. His date of birth is June 20, 1961. He was born under the Gemini zodiac sign and belongs to Baby Boomers Generation. According to the Chinese calendar, his year of birth, 1961, is the Year of Ox. He is from Buenos Aires, Argentina. Other television stars also known for having hosted the program You Will Fall Too on the Canal Caracol network include Katherine Porto and Monica Fonseca.

I'm not arguing with it, because I know that it's a great thing for Ufology and hopefully Ufology will get more attention and funding for investigations because at the minute it's very much a PFA (pay for access) which is the worst way to get funds for researching and making the genre of Ufology kinda like a hostage to itself! Pay for access or you can't see them, which it goes against everything that whistle-blowers stand for. MUFON, that's a pay for access database of UFO sightings and arguably the largest and most well known UFO reporting center in the world.
Then there's other UFO reporting sites that don't charge for access, unfortunately when you go onto it though it really feels like the UFOs are old or even missing main information and they definitely don't feel or seem "up-to-date". And that's the difference between a paid service and a free serviced database of UFO sightings I suppose? It is what it is, but don't get me wrong though because while there's sister sites of these nail UFO reporting sites,
Related post
UFO Flies Right Up To The ISS Then Flies Back The Same Way It Came | Intelligently Controlled Craft
Here's a quick quote from Bro Bible the website which carries the story:

While waiting for his flight at El Dorado International Airport in Bogota, Colombia, musician and TV presenter Cesar Escola made a startling discovery: a UFO. Escola was killing time by messing around with his new phone by filming some of the incoming planes landing. While he was reviewing the videos he noticed something rapidly moving from right to left in one of them that he believes was a UFO.
“Look at the speed because while the plane is almost not moving, it passes at an incredible speed,” said Escola.

I'm not saying that it's an Extraterrestrial vehicle, I'm really not saying that it's a man made vehicle either. But what I am saying is that the Bogotá International Airport is so secure and it's outfitted with sophisticated technologies in and around it, what I am saying is that this little UFO penetrated this restricted air space and actually came within meters of an aircraft in the air coming into land! Imagine if that was a Presidential aircraft coming into land (God forbid). Imagine if that was a diversion tactic, imagine if you will "anything that you like" and guess what, it doesn't matter what you think because this tiny small UFO got through any existing defences and things need updating rapidly, like now. Get er done already.
Here's the full YouTube video uploaded by Crõnica TV news in Colombia:
Please share your thought's and opinions also any ideas that you might have about this amazing UFO sighting filmed at Bogotá International Airport by a celebrity TV presenter. I'd also appreciate it if you could share this post with someone who you think would appreciate it, cheers.
Credit: Cesar Escola/Bro Bible/Crõnica YouTube Channel/Bogotá International Airport/UFO Sightings Footage/UFO News/Idol Birthdays/Samsung. Photo Editor.