This Google Earth Airplane Anomaly is 100 percent real and it really does look like a double fuselage aircraft with 2 sets of wings.

It's definitely not a hoax unless Google Earth/Maps is having an April fools type of hoax? But im confident in saying that they are not having a huge joke at our (the whole world's) expense. The plane is real, let's just get that out into the open now and let's get past the fact that while yes it's funny or whimsical that someone is not having a joke!
Look, I definitely don't create these myself at all. I couldn't even if I wanted to because it's in Google Earth in the Map's and I don't have access to them, nobody else has access to the Google Earth/Map's so to assume that it's a fake or a hoax is easily answered by just looking it up and matching up the images, right? All I know is that the guy who found this amazing Google Earth/Maps - double wing's and double fuselage aircraft has a good eye to find this.
Related post
UFOs And Flying Saucers Captured In Google Maps Near Area 51
UFO Sightings Footage mission:

All the while we're bringing you exceptional UFO stories and undeniable ancient origin theories that have Alien anomalies within these stories. Conspiracy theories that have truth's within them need to be brought to the world ni matter how big the truth is. He and I want to get to the bottom of the real truth and bring it to you guys wholeheartedly. That's what I intend to do, it's a good thing, it's a really good thing!

Below is the double fuselage and double wing's aircraft spotted on the runway, parked next to other single fuselage and single winged aircraft. Why is it that there's just one aircraft with 2 sets of wings and fuselage? There's no glitches there's no obvious overlap of photos and the whole photos are in perfect working order.
There's no obvious reasons why this is happening. We're allowed to point out the strange things that are in the world. It's a good thing it's being pointed out in that others can cone forward when they see strange things because they know that it's not a bad thing. Of course there's people who will want to ridicule and point and laugh. So what! 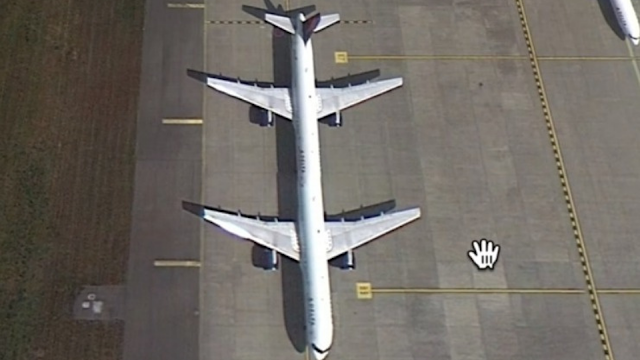 These are the coordinates on the video showing the place where the aircraft was.
Note though, that the date was 2012 but the video wasn't uploaded to YouTube until January 22nd 2021: 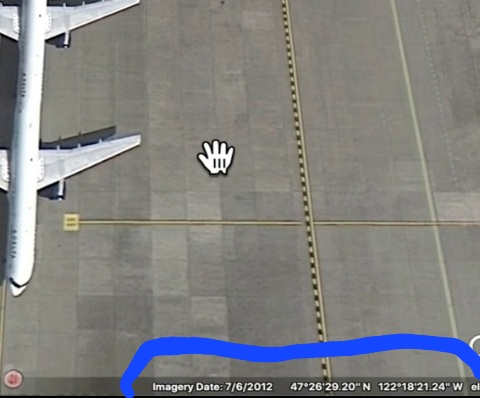 Imagery date 07/06/2012.
47*26'29.20" N
122*18'21.24" W
Elev 379 ft
Eye alt 898 ft
Credit: Google Earth/UFO Sighting's Footage/UFO News/Canva.
It's a brave man that can see something strange in the world and point it out to get a debate going. Yes of course there's always gonna be someone who finds it hysterical and start laughing. Oh well, It's not their fault that they laugh at things that they don't understand. We should ask questions of the things we don't understand and not laugh at them! It's easy to point at something strange and make fun of it or poke fun deliberately because it's a brainless endeavor!
To poke an Ants nest for fun and then wonder why they got stun by an Ant. That's what a lot of people do and still do over and over again. Laughing at something we don't understand is our basic most caveman response. But, in this day and age and time of "absolute high strangeness" with the world in a turmoil, if we want a rational debate and then get answers from that debate then we need to question the thing's that challenge our understanding of the real world "just like this strange double winged aircraft".

To get answers to this double winged, double fuselage aircraft, we must first bash down the barriers of our own prejudices.

First things first, it's a real bonafide aircraft. Look around the runways, look around the green grass and the grey concrete roads. The aircraft's are intact. The land is intact. There's no glitches, there's no obvious overlap of photos from other Google Earth photo's. This isnt a case of 2 aircraft in 2 different photos that are sat on top of each other, overlapping in just a way that it looks like a single aircraft with 2 sets of wings and the world's longest fuselage...
Related post:
Many UFOs In Formation Filmed From A Military Plane Looks Very Real
So, all said and done it's a real bonafide aircraft anomaly. I can just remember the Antonov AN-225 Mriya one of humanity’s greatest feats of engineering and how even that was laughed at because it was so big and nobody believed it. They said it can't be an aircraft because it's got 6 huge engine's and how it was the biggest thing to ever take to the skies!
The 285 tonne aircraft with six engines and dozens of wheels has no business being able to fly. But yet it does, and that was exactly how it was been talked about. People couldn't believe it, in fact Air Force big wigs simply refused to give it any time or day.

They ignored any reference to it, they said it was, and I quote "Poppy Cock!"

There's something amiss here, there's always something amiss in the world when it comes to strange or out of place things, out in the open... The first thing is that people will laugh, oh how the people will laugh at the people for pointing out something amiss or strange in the world. It's just the way it is, right? But after wiping away the tears from the laughter and wiping the brow.
We must come back to the fact that Google Earth isn't broken, it's not a hoax and Google Earth has not got a glitch in it's algorithms or it's software corrupt. Truth be told guy's, this is a real bonafide aircraft with 2 sets of wings and fuselage but I am willing to research more and I'll definitely keep an open mind as to it been mistaken for something else?
The answer could literally be a lot more simple than we first thought? It just might be an aircraft capable of carrying a lot more tonnage of various different materials for either war or peace time missions like "peace time projects" for the UN or Doctors without borders?
An aircraft like this could be of immense help!

Hurricane's and other natural disasters need addressing so if this is a new aircraft capable of bringing double the amount of aid relief to the most needy then this is the best thing since sliced bread and we must congratulate the makers of this aircraft. If that's what this is, then thank you.

Look, I'm talking about this as a good thing. Im hoping that this is real because while it looks bizarre and almost comical, if this was real it'd be great asset to humanity. The good that we could achieve with this is immeasurable. It could be water, food, clothing and accessories or persons brought to safety?
Here's the extraordinary video which was uploaded to YouTube by UFO Sighting's Daily:
Please share your thoughts and opinions on the amazing Google Earth Airplane Anomaly. Like, share and subscribe for more UFO and Alien anomalies, cheers.
Credit: UFO Sightings Daily/UFO Sighting's Footage/UFO News/Ufosfootage/Canva.