This is apparently a UFO sighting that was filmed over Miami FL downtown. There's 6 UFOs filmed in a formation and apparently they all fly into space.

All the UFOs fly off into space all at the same time after they've seemingly got the attention of human beings because that's really what it looks like is going on here.

6 UFOs filmed over Miami FL in formation fly into space.

One thing is certain, there are a lot of UFO conspiracy theorists that believe they have proof that life exists in other planets as well. Although we do not know what he saw, it would be interesting to see if such an incident occurred again in the very near future. Let us hope that someone could get a better recording or maybe even take a picture right before these objects vanish over cloud covers.

Social-media influencer Rogan O'Handley posted videos showing something incredible that his friend had sent him which he was claiming that he'd witnessed an unusual UFO account over the night sky of downtown Miami, FL. 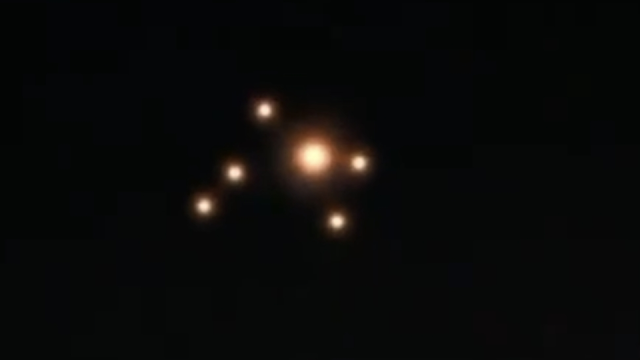 Credit: UFO News YouTube Channel/Miami New Times/UFO Sighting's Footage/Ufosfootage/Canva.
UFO orbs filmed in formation over Miami in downtown Florida. A friend of Rogan O'Handley was filming from his patio and it looked like it was a beautiful night. He did not expect to see what he saw, but he did and it was amazing. There were 6 UFO orbs that seemed to form a circle and then they all flew away into space towards the moon.
They were orange in color like fireballs with no flames coming out of them at all. The orbs were very large, bigger than any plane in the sky on any night or any other flying object that could be seen come to think about it, either at that moment or any moment. They stayed under the cloud's in formation for what seemed like an eternity. They just hovered there as if they knew they were being filmed and they seemed to move around each other like they were trying to form some kind of shape or pattern! Was they attracting the attention of human beings?

Apparently History Channel say's that this is a hoax, but I want your opinions on this guy's, let's see what we can come up with?

It really looked like something out of this world! This is my own opinion on what I'm seeing in the video here. Conclusion Good news! There are more sightings to be found on our YouTube channel. Please don't forget to subscribe and click on the bell icon so you can get notified of new videos as they come out. Thank you for watching!
This is a very interesting sighting and it was not hoaxed, was it? What's the chances that this is a hoax? It was actually filmed by someone who was filming the night sky over Miami and the orbs that came into view were a surprise to him, but he filmed them on his camera and the lights that appear in this video are real looking. What I'm saying is that there's no way to know if it is a UFO hoax, unless the person who faked it comes clean? The lights appear to be circular in shape and they remind me of Christmas light balls, but they obviously aren't.
Related post
Triple UFO Sighting Which Was Filmed And Witnessed By Many People
The location of the UFO Orbs video is downtown Miami. The witness filmed the UFOs from his patio. He had no idea that this event was about to take place, but he did capture some very stunning footage, which is definitely compelling and worth taking a look at!
Related post
14 Bright UFO Orbs Over The Atlantic Ocean Filmed By Journalist
It's hard to tell whether these things were actually UFOs or they are visible drones. Either way, it is still an amazing thing to witness. Share this video with more people because the more the world knows about this the better it would be for everyone. We can get to the bottom of it, together. I could post all day long about UFOs that are more than likely real, but what about the UFOs that aren't backed up? We still need to be challenged and at least tackle UFO sighting's that don't have credentials, right?
Here's the extraordinary video which was uploaded to YouTube by UFO News:
We have no idea what these things are. Maybe they belong to the US military. Maybe there are aliens in them. Maybe he made the whole story up, but it is not only that, we never will know unless the government tells us or someone else comes clean about this supposed UFO sighting.
Credit: UFO News YouTube Channel/Miami New Times/UFO Sighting's Footage/Ufosfootage/Canva.