The day was like any other day in Italy. A football game was about to continue when a UFO in the shape of an egg occured in 1954. This is a real UFO.

10,000 witnesses described it as either cigar - or egg-shaped along with silvery-white threads falling from the sky.

This craft was witnessed by approximately 10,000 people in the city of Florence on October 27th, 1954. Samples of a substance that fell from the craft were sent to the University of Florence where they were examined and found to contain boron, silicon, calcium and magnesium. These elements were not thought to exist on Earth at the time. It was 27th October 1954, a typical autumn day in Tuscany. The Fiorentina football club was playing against its local rival Pistoiese.

It was described by witnesses as either cigar-or egg-shaped along with silvery-white threads falling from the sky. Samples mostly disintegrated on contact, but some were examined at the University of Florence and found to contain boron, silicon, calcium and magnesium.

While ghosts, aliens, and unidentified flying objects are always popular theories when it comes to UFO sightings, sometimes the most mundane answers can provide the best explanation. 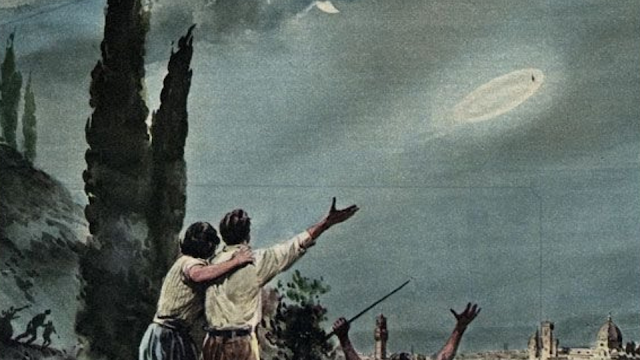 This is a 10,000 people eye witness report! It's probably the most eye Witnesses to a UFO sighting in history... 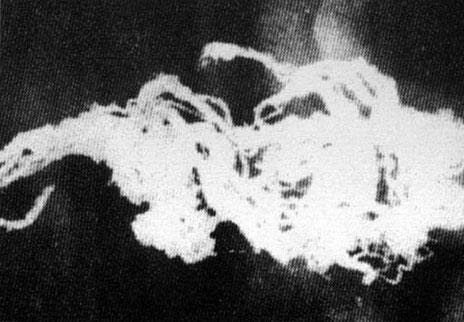 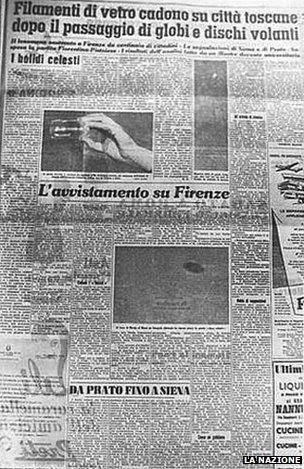 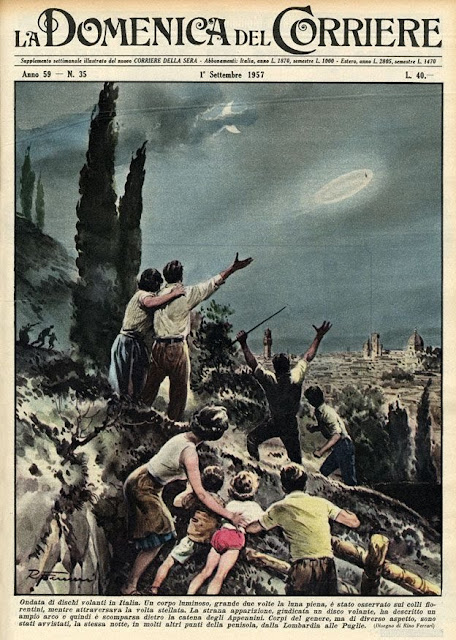 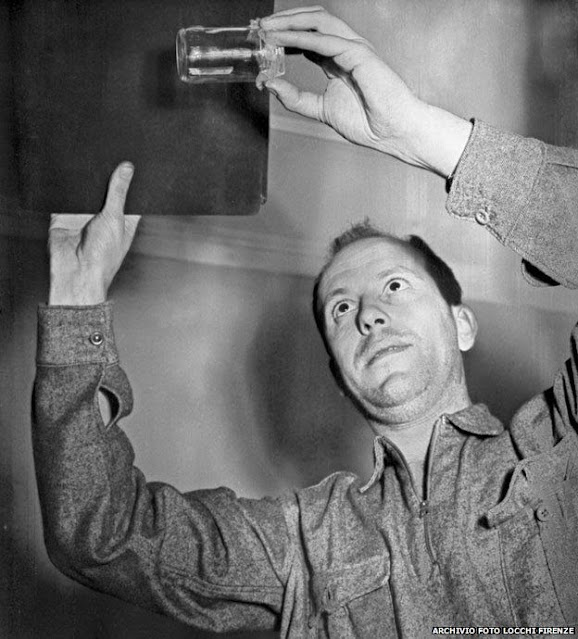 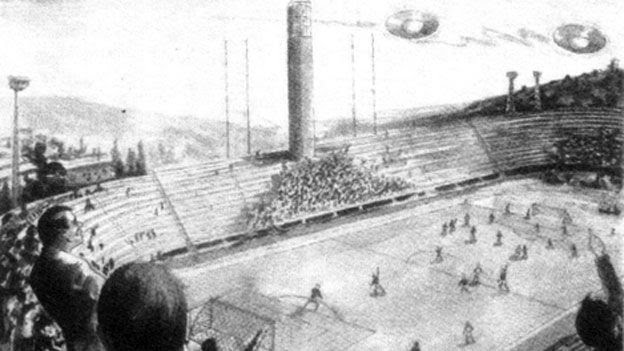 When we see a UFO today, it is an accepted phenomena and there's a general consensus that we haven't been visited by aliens. But sometimes the UFO sightings are so convincing.

While skeptics can easily talk about their time-worn explanations for Unidentified Flying Objects —”they're just weather balloons”, “it was actually the planet Venus” — those explanations seem rather thin in this instance.

So, why do people believe in UFOs?

How do you explain an airborne object that has a hard and glassy surface, floats upwards in a way similar to the presence of a gas like substance and which leaves "glittering particles" on contact?

The idea of extraterrestrial visitation is a popular one, and the Roswell incident has come to represent that possibility. But there are many other sightings, such as the one in Florence, Italy, in 1954. Plainly stated, it seems wise to recognize that Earth is being visited by something—and we may be justified in assuming they haven't always come in peace.

There are a few possible explanations for this case: it's an alien artifact, it's an alien hoax, and it's a human-made object reflecting sunlight. As to the third possibility, aircraft manufacturing in Italy was at an all-time high at this time and the US and UK were both testing flying saucers near Florence, Italy.

In the context of the UFO phenomenon, most, if not all known cases of strange objects falling from the sky can be explained by, or are related to atmospheric phenomena.

A great example of UFO sightings are these football game. In those days of course even the most improbable things were thought to be true, but the stories kept on coming from all different parts of the world and people kept on seeing them. They seem to come out of nowhere at times and disappear into thin air.

So, did a UFO fly over Italy or was it something else? We may never know for sure. But then again, maybe we'll never find out for sure about any of these UFO sightings. And that's okay. The best part is the mystery.

This is not an isolated incident. When people are witnesses to strange, unidentifiable sights they continue to be spooked by them, even many years later. The more often UFOs are sighted, the more likely people will believe in them. If you live near a major UFO hotspot, chances are you'll eventually become a believer.

It's often difficult to distinguish real UFOs from hoaxes, but this one is so well-documented that it can't be easily dismissed. It would certainly interest me, and if you have ever been interested in UFO's this story may peak your curiosity.

This was clearly a mass sighting of an alien craft. It is irrefutable that we have not discovered or made the technological leap to develop such crafts. We have, however, recently discovered organisms found in space that raised the possibility of microbes in other planets - radiation aside, space presents a good environment for them to live. The aliens could be space microbes which are too small to be detected with current technology and abilities, but which exist among us. Luckily, there is no tension between humans and space microbes and both species are safe from their actions, lol.

So, given the wide-range of witnesses, and the fact that this happened in such a populated area, it's hard to characterize this UFO phenomenon as anything other than a true mystery.

For all those who might be excited, hoping that this is proof of alien life forms, there are alternate theories. For example, researchers have suggested that it could have been a meteor breaking up in the atmosphere, or perhaps even a piece of Giove's Comet.

It is of course possible that the witnesses were deceived in some manner. However, weight has to be given to this mass UFO sighting when considering more reliable witnesses, such as pilots and military officers, who have reported UFOs under a variety of circumstances. This lends support to the idea that something was seen on Sept. 24, 1954—and even if it wasn't an unknown craft from another world, then it must have been one of our own experimental aircraft or drones.

In conclusion, we see three remaining possibilities: 1) the witnesses were mistaken; 2) it was a flock of birds; 3) it was some unknown type of aircraft or vehicle. Given the weight of the evidence, we conclude that the final possibility is the most probable.

Here's the best UFO sighting of the last Hundred years based on amount of UFO witnesses uploaded to YouTube by Close Encounters UFO:

This is a well known and documented UFO sighting, please share your thoughts and opinions on what you think is going on here, cheers.