UFO Passed In Front Of Mars What The Hell Was It

London UK UFO sighting through a telescope while the person filming it sees a huge black, shimmering UFO move in front of the lens. Mars UFOs real.

Back in 2018 an amateur astronomer had his telescope trained on Mars and he caught a very strange looking UFO or craft or it could be a spaceship.

He came under fire and criticism as you'd expect for posting something so unusual as a possible UFO in front of Mars and having an opinion because let's face it people can be horrible sometimes for no reason other than being different and that can be at the best of times. If you think for yourself, then your somehow different and an unusual specimen or just a peculiar type of person who deserves a bit of stick for having an opinion. I don't mean to call out the hater's but sometimes it's saddening to check comments and it's pure critism. I did check a few people's "comments feed" and yep, some just troll.

But there are staunch supporters and these guy's are awesome, inquisitive, curious, and they want to understand what's going on in the world with these UFOs, just like I do. You guy's are brilliant and I thank you for checking out my channels, websites, pages, groups etc. Your awesome. 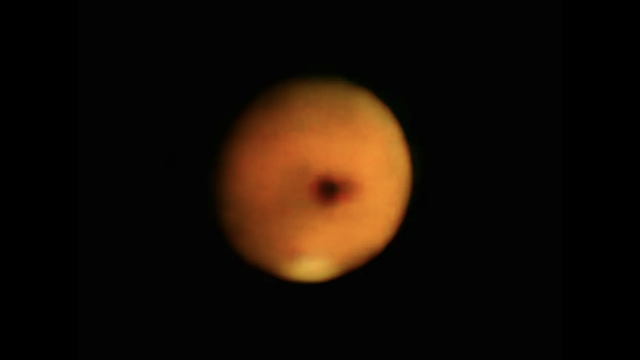 I spotted this strange object through my telescope when I was filming Mars but what is it? posted the footage of this ufo on my astobiscuit facebook page and thousands of people thought they knew what it was and gave me a whole range of answers. The top 8 theories were...

Bug in the lens

That's just the way it is in 2022, it's everyone and yes just look at the comments anywhere on any social media platforms there's no exceptions to the rule. I'm like it, your like it "we are all like it", there's no exceptions, no pretences, no lies and it's a "card's on the table time" people are rubbish. All people are rubbish from the leader's down.

If you can't handle the truth, the door's that way.

Anyways, the UFO flew in from the right as this guy was filming it through his telescope 🔭 while on his balcony in London, UK. He was trolled for posting it for some reason which I can only think it's the relative anonymous nature of been behind a screen and we'll, jealousy plays a part.

But it's definitely a good UFO sighting, it's got the same shimmer to it which the planet Mars has through the telescope and so it's not a bug on the screen, it's not a plane passing by and it's not a satellite or the International Space Station because these wouldn't even register like this one did. The information from the description of the YouTube video is above which names the top 8 best answers as to what this object could be?

Here's the epic video of this strange looking dark and huge, it's gotta be one of the biggest UFO sightings between the Earth and Mars:

Please leave your thought's and opinions on this post in the comments section below, cheers. If you know someone who would appreciate this post please can you share it with them, thanks.