Concorde was making a promotional video with the BBC and while filming the video using colour, a UFO Orb or UFO sphere turns up and checks it out.

Don't forget that Concorde was the fastest commercial Jet ever created, and this UFO just flies up to it and start's checking it out on camera.

It's one of the best evidence based UFO encounters I've seen and known about. This is an old school UFO sighting because of how long ago it happened. 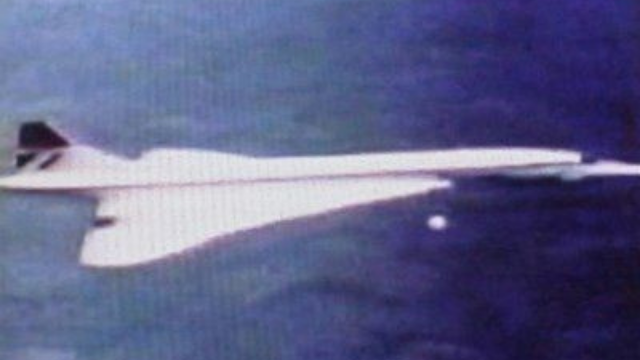 But also now that we've got UFO disclosure with the UAP Tic Tac videos, if you look at this UFO you'll see a resemblance to the Tic Tac UFOs. This really does look like a Tic Tac sphere UAP. Some people have called this UFO a Foo Fighter UFO.

In fact one guy on Ufoforum.it says he's looked at this very closely and he can actually see and detected (he highlights it) a reflection in the pilots cockpit window. He reckons when the UFO Orb is coming in to get close, the reflection moves in sync with it which to be honest with the poor quality of the video, it could be a cloud in the reflection or it could be the BBC secondary plane used to film the Concorde from? Which is more believable because of it's size in comparison with a smaller UFO sphere...

Credit: ufoforum.it/UFO Sighting's Footage/UFO News/Canva.
But wow, kudos to the guy on Ufoforum.it for spotting what nobody else has, well done buddy. You see, this is why it really pays off to get as many eye's as possible to check out a UFO sighting because we all look at things differently and even UFO sighting's are looked at very different.
I'm shocked that such an amazing UFO sighting filmed by the BBC while out filming promotional videos for Concorde hasn't ever been taken seriously enough for someone or some organisation, agency etc to look into this more? I mean it doesn't get any better than this because at the time of this being filmed the BBC probably has the most advanced colour cameras on the planet!
Related post
2 Glowing Golden Spherical Orbs Over LA
So, it's not like they didn't have extraordinary materials to sift through and it's the BBC they could have done a TV show itself about the day UFOs turned up to check out Concorde. That's just my own opinion but I understand that reality back then was to hide everything from society and totally ridicule anyone for even talking about UFOs. It was never gonna see the day of light if I think about it.
Here's the 1976 BBC video clip which I've uploaded to YouTube:
As you can see in the video – there is a UFO, but at that time, despite the hype in society, after the publication of this video, the authorities were not going to admit the fact of their existence and quickly fabricated an “authoritative opinion” from “respected specialists” who, without hesitation, announced this UFO – “glare”.
And it's actually unbelievable just how quickly these so-called expert's were eager to announce that this is a glare, more like a bare faced expert opinion lie on "their" behalf, the BBC becausethey filmed it so it'sthem who wanted an expert to sell it as a sun glare. On a cloudy day no less, these geezersate absolutely terrible people! This UFO,  being a glare, is totally laughable, it's an outright lie! Liars!
Here's a second video called Analysis of Concorde UFO footage, which is the most ridiculous claim to dismiss a UFO sighting that the world has ever heard, it's not acceptable for so called expert's to lie which is what he's doing and he knows it, it's totally laughable and it's just insane! Check it out:
I honestly can't tell if the guy on the video is a comedian or something like that? We can all see for ourselves that that is not a sun spot, since when did a sunspot act like that? Just suggesting that is mind blowing because of stuff like this and the obvious stupidness of the claim, this is how we know people are told beforehand what to say! Or else. Now that makes more sense.
Please share your thought's and opinions also any ideas that you might have about this amazing UFO sighting that buzzed Concorde. I'd also appreciate it if you could share this post with someone who you think would appreciate it, cheers.
Credit: BBC/Concorde/Allcoded YouTube/Wikipedia/ufoforum.it/UFO Sightings Footage/UFO News YouTube/Anomalien/Canva.