Silver UFO Can Be Seen Stalking Behind A Cargo Ship

Eye witness filming a silver metallic UFO flying over Dunster beach in Somerset in the UK was out for a walk.

This is undoubtedly worth looking into because we all now know that this type of silver, shiny and Tic Tac shaped UFOs are real.

It's a strange thing to see, people asking if UFOs are real. We had full UFO disclosure in 2017, 2018, 2019 with all the Tic Tac and Pill shaped UAP's (Unidentified Aerial Phenomenon). But only because people are still writing post's about UFOs, but they seem to be still asking the same, age old question "are UFOs real". Seriously, there's a ton of new stuff being posted all the time with that very old question attached to it and although the US Navy has released the first 3 UFO videos it seems to have gone right over their heads. 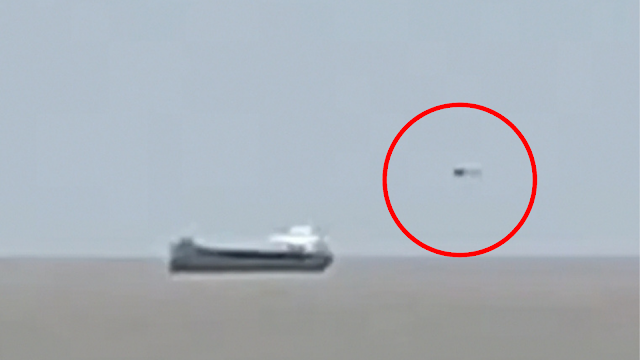 Credit: Apocalyptic Dog YouTube Channel/Latest UFO Sightings/UFO Sightings Footage/UFO News/Canva.
I've lost count of the times I'm seeing people write post's and asking people if they believe in UFOs, if UFOs are real and to be honest, I'm starting to think what was the point in releasing the first set of UAP videos? For real, what's been the point? Using the term UAP cleared up nothing, but anyway, for those of us who can understand the term UAP, we know it means Alien's are very real.
Related post
UFO Landing Site Discovered In Google Maps No Fly-Zone In Arizona
While showing UFOs, it's the fact that they used the term UAP or Unidentified Aerial Phenomenon. It's absolutely thrown everyone right off the scent. To some people though like UFO believers for instance and Extraterrestrial phenomenon enthusiasts alike we all know exactly what this US Navy terminology UAP means. It means that UFOs are real, it means that some are man made, but some are Alien spacecrafts and it's definitely not another country's advanced aerial technology because the United States would never disclose the information to anyone if they knew another country's technical abilities or advances in technology or even another country's technological limitation's. They just wouldn't do that, no way, never! Not even in the case of UAP's.
Quote:

The witness tried to enhance the silver UFO but had trouble identifying what kind of mysterious object he is looking. He said that that the bizarre object could not be cigar-shaped, but with some distortion, it made him think it could be a saucer.

He further explained that the distortion could be the result of moving or could be from the atmosphere because the UFO must be far out there. 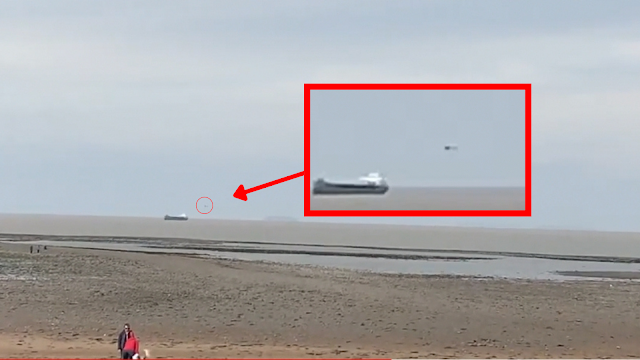 This is the original screenshot of the UFO or more specifically "the stalking Flying Disk" behind the huge tanker ship in the Bristol channel, UK. This is unheard of for a UFO to be Stalking a ship, I've herd of UFOs Stalking aircraft before but never ship's? It's a new one on me and that's probably why I decided to create a post about it, to find out what I can about something I knew nothing at all about.
Related post
UFO Comes Up To SpaceX Rocket And Turns Away
So when I see post's still asking if UFOs are real, I shake my head. Unless they're asking if the specific UFO in a video is real, like a hoax or a man made craft etc. But in Ufology, UFOs are now a fact.
Here's the awesome video showing this fantastic Flying Disk shadowing or trailing this floating super tanker.
Please share your thoughts with us about what you think it can be, if you've seen this particular Flying Disk before or if you've had a similar UFO encounter with something looking like this one, or any UFO come to think about it because all UFO sighting's should be recorded for historical purposes.
Credit: Apocalyptic Dog YouTube Channel/Latest UFO Sightings/UFO Sightings Footage/UFO News/Canva.