A UFO sighting on comet UFO 67P spotted by an Eagle Eyed witness checking out the published photographs and videos by NASA and the ESA. UFO sightings.

I'm totally stunned because I have to agree with the YouTube Channel UFOvni Disclosure that this bizarre looking structure is either an Alien base or possibly a UFO?

It's definitely something that should not be there put it that way and just looking at it tells me it's intelligently designed and it's not natural to the comet in any way, shape or form! I'd even put money on it been an outpost or a stop off point for an Extraterrestrial species?

We've got one, it's called the International Space Station. See, it may sound a bit strange when we say "it could be an outpost for an Alien species" but we've got the exact same thing! Maybe once upon a time it sounded pretty far out but today, in 2021 it's absolutely normal.

So, let's have a look at this obvious structure and then we can have another go at identifying it. Everything I said just now is based on my first impression of this comet 67P anomaly. 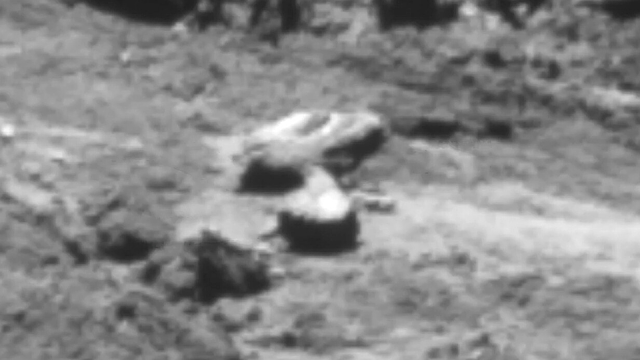 Credit: UFOvni Disclosure YouTube Channel/UFO Sightings Footage/UFO News/Canva.
I'm undecided if it's a base or a UFO even though I wrote it was an Alien UFO in the title, I did so because I can't explain both in the title. The title would need to be a paragraph or a sentence to add both UFO and Alien base theory both for and against.
Related post
The Biggest Fleet Of UFOs Just Turn Up At The ISS At 2:33 In The Video
First off the bat I wanna draw your attention to the antenna on the right hand side of the Alien base anomaly, looking at it directly. It's a strange, one piece antenna like object and I say antenna because it's sat at the top or on top of the object which is where an antenna would need to be to have an unobstructed path, so as to send and possibly receive a signal through space. 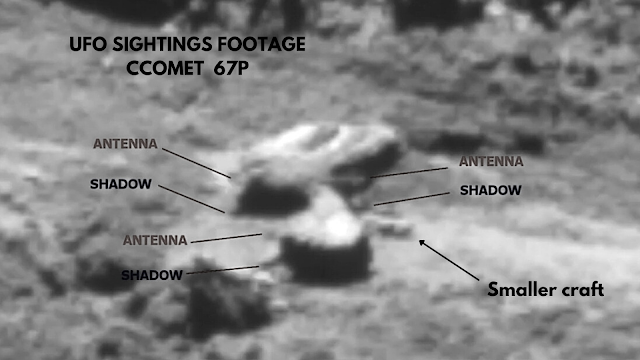 Credit: UFOvni Disclosure YouTube Channel/UFO Sightings Footage/UFO News/Canva.
It would need a target (the antenna) which means an Alien species with a home planet and in turn it means or it would insinuate that there's an intelligent and advanced Extraterrestrial species out there? If this holds water then an Alien species with a home planet colonising a moving comet points to them already knowing about humanity on this "our home planet".

And these Aliens have the advanced technologies needed to either land a spaceship on a comet or to build a base on a moving comet.

So yes, if they can spot a tiny (in comparison with Earth) comet in space amongst the blackness of space then I'm very confident that they can spot Earth which is huge, blue, green and lit up like a Christmas tree. They know we are here. Because we know they are there, and they seem to be more advanced than us.

You can guarantee that they know about us. It would also answer the question of where are the UAP Tic Tac UFOs coming from...

We don't have a base or a spaceship on a moving comet, but they do. And it looks very "at one with it's environment". It's got no asteroid strikes on it's roof, it's free from dust, it's just sat there like it was placed there. If it's been there since the comet was formed then it would have very rocky surfaces just like all the other surfaces on this comet but it's smoothe and free from anything that say's it's been there since the comet's beginning. It blends in with the comet like it shouldn't be there. The Extraterrestrials are not perfect at camouflaging this base of UFO craft - if indeed to camouflage the base or the spacecraft, is one of it's goals?
Related post
Astronaut Major James McDivitt Saw And Photographed Gemini 4 UFO (found picture)
Below I can see the antenna because it's quite obvious and I can see a smaller craft in front of the main base or UFO. 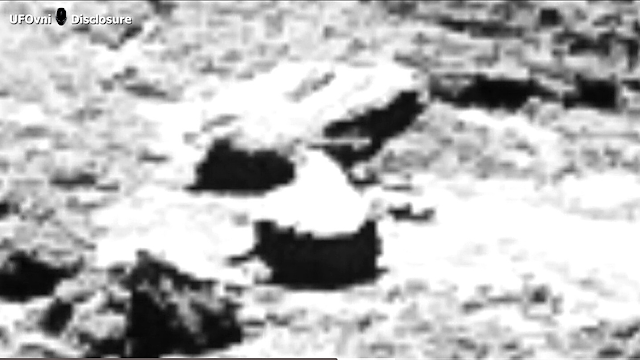 Credit: UFOvni Disclosure YouTube Channel/UFO Sightings Footage/UFO News/Canva.
It's either a UFO or an Alien base and I've gone with it been a huge Alien UFO. It's Alien, I do know that much because it's not a human outpost or ship. I don't believe in coincidences, so what's the chances of an antenna been on a comet 67P and a rock shaped like a UFO together on the same oddly shaped comet? Seriously, what's the chances of that happening on a comet with already conspiracies attributed to the comet? Hell even I've found some strange and very intriguing anomalies on this comet a while ago.
Just know this about any comet:
It's a ready made, already accelerating space platform with absorbing materials already covering the entire comet, right? It's a perfect platform for any species with half a braincell to use as a ready-made, self made, spaceship and platform and with just a few well placed thrusters, it can be steered anywhere.
Here's the full YouTube video uploaded by UFOvni Disclosure:
Please share your thought's and opinions also any ideas that you might have about this amazing UFO or Alien base on comet 67P. I'd also appreciate it if you could share this post with someone who you think would appreciate, cheers.
Credit: UFOvni Disclosure YouTube Channel/UFO Sightings Footage/UFO News/Canva.