This is a sure thing I terms of it's a Diamond shaped UFO filmed over Medellin in Columbia. It's a truly wonderful object over the nearest airport.

Okay, all we have to do is listen to the original eye witness at the start of the video as he's trying to wrap his head around what he's seeing and filming.

But, he's still got the presence of mind to explain to the subsequent people who are later on watching this video played back.

He must have already run scenarios in his mind's eye - in his imagination because that's why he's almost narrating a presentation. It's a great sense of responsibility because it may have dawned on him that history needs to know this, it's all part of the UFO, Extraterrestrial entities and human beings timelines. 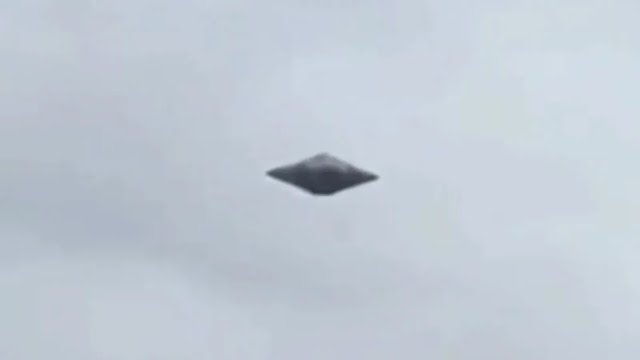 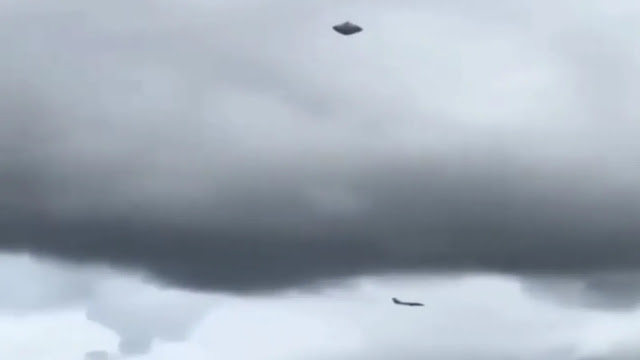 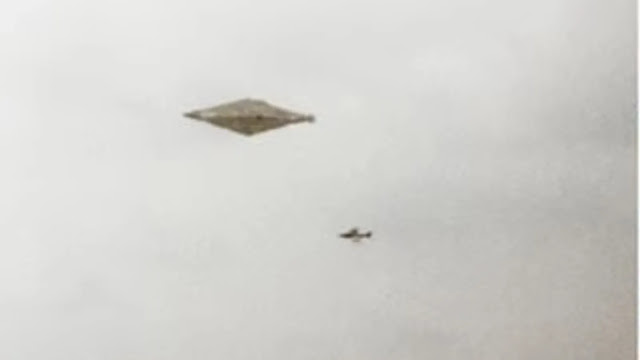 In parts of the video, the person speaking is actually speaking Spanish, I don't understand Spanish. But if any of you guys can translate what's been said could you leave us a message in the comments section below and let us know, cheers?

He must of thought to himself "nobody's gonna believe me" so I must explain what's going on and then he directs the camera across to the right and explains "that's the airport" and then he pans back to the diamond shape UFO. As he does this we can see another airplane underneath the diamond shape UFO actually just passing underneath it probably on it's way to the airport to land.

Okay, I did have a bit of confusion here thst I'd like to discuss. The other day I posted about a guy who's UFO sighting had been suppressed for 32 years! It's this one which was photographed in 1990 up in Scotland by Craig Lindsay. The RAF Jet was filmed chasing it and the jet and the UFO diamond was both photographed together in the same picture but the RAF still want it sealed for the next 50 years! Yes, that's right, they wanted to suppress it. They wanted to withhold it because it shows an RAF Jet actually chasing a Diamond shaped UFO and I thought, this is 2022 there's bigger things going on in the world like WW3 on our doorstep from China and Russia!

It's exactly and I mean exactly the same as this one here! It's the same size, same colour, at the same height. In fact, this is why I was a wee bit confused as they're literally probably only seperated by distance? I genuinely thought that they was both the same UFO.

I thought I was looking at the one I'd already posted and so I then thought, so there is a video for it? But, this one occurred over Medellin in Columbia. It's 100 percent a mind blower. Is it one and the same Diamond UFO as the one in Scotland in 1990?

Does this one, lend credibility to the 1990 UFO sighting and a vise versa? Because I'll be honest with you guys, I genuinely think that they both back each other up. There's this Diamond shaped UFO filmed in Medellin, Columbia in 2022 and the one in 1990 filmed in Scotland which let's just be frank about it, they look exactly like each other to the point where this could be "one and the same?"

If you have any questions or thoughts on this epic Diamond shaped UFO, please share it with us all in the comments section below, cheers. If you don't mind can you share this post with someone who would appreciate it, thanks.