There's a large group of UFOs in the night time sky all of them seem to be dancing. There's a lot of reasons why they're seemingly dancing in the sky.

This is a straight up mystery and is not going to unite a lot of people as I think half of people will say drones and the other half might say UFOs after what I point out to them?

If you look at the video, we see a UFO entering the picture but from up in the cloud and it has to fly downwards, which if it was a drone, it would be entering the picture but from the total opposite direction right? There's no information with this UFO encounter but that's because it was posted directly to Pinterest which is just a media hosting service.
Related post
White UFO Orbs Flying In Formation In The Best Footage | You'll See
If there's any story to go with the video then it's usually linked to the story but in this instance, Mysteries Unexplained Pinterest didn't have a link to any story so it must have been reported without one? I tried the usual image search but came up empty. But just because there's no such story associated with the UFO video, that doesn't mean I shouldn't post about it or talk about or even write about it, right. 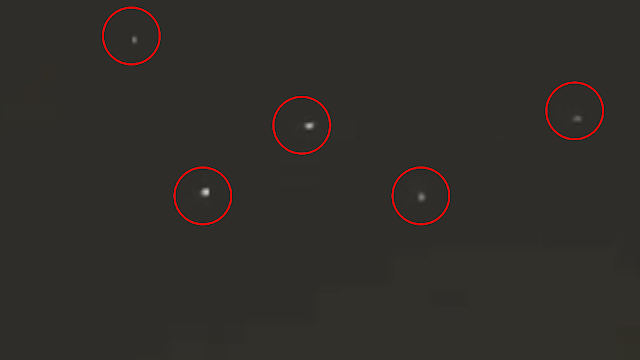 Credit: Mysteries Unexplained Pinterest/UFO Sighting's Footage/UFO News/Canva.
It's only a small observation but it's these very small observations that can and often do, quite often (by the way) swing the doubt into a solid decision. For me it's done just that because after seeing this UFO entering from the clouds above from all the other UFO action, it's actually coming from somewhere which it can't possibly have done so if it was a drone it's helped me make my decision. And just to mention that the person flying a drone needs to be able to see the drone and even if it's beaming a real time video, it can't see where it's going inside of a cloud! So, that as well, for me I think has sealed it. I do not believe it's a drone formation or anything else like that "at all"! Credit: Mysteries Unexplained Pinterest/UFO Sighting's Footage/UFO News/Canva.
It might not seem like a big deal or you might not have even noticed it but after researching UFOs for a long time it's these titbits of information that can blow it open ended. It goes for both way's also. It's not just to say that a UFO incident occurred but also it can insinuate that a UFO incident is a hoax as well.
Related post
Huge Fleet of UFOs Filmed Over Austin In Texas
The UFOs here in this video seems to be Orbs or light spheres and really look like they are dancing. There's no audio with this video but that doesn't mean anything really unless it could identify this UFO sighting as been a hoax or fake? We have to give it the benefit of the doubt regarding the UFO sighting as it's a recorded pi
Here's the full video of the UFO incident:
Please share your thought's and opinions also any ideas that you might have about this amazing UFO sighting filmed in the night time sky dancing. I'd also appreciate it if you could share this post with someone who you think would appreciate it, cheers.
Credit: Mysteries Unexplained Pinterest/UFO Sighting's Footage/UFO News/Canva.