People are sending me a lot of UFO Orbs in video's. There's been an influx of these UFO Orbs shaped like balls of light. UFO Orbs are real to people.

I alway's say that the UFO Orbs constantly being captured by eye witnesses are the most abundant of all the UFOs on Earth right now in 2022.

Here's yet another UFO Orb sighting which was sent to me today from an eye witness in San Diego CA USA. Omg, it's a literal shower or avalanche of these Orbs every single day. 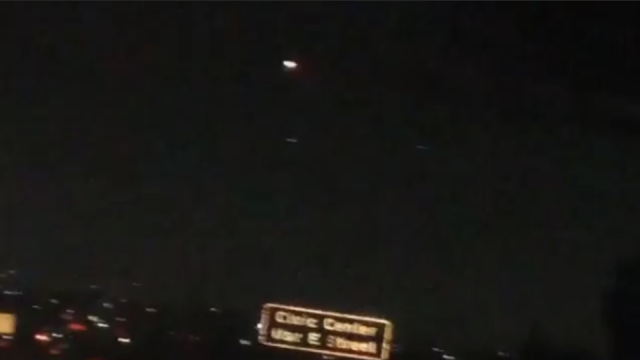 Credit: AC Jewels And Emeralds/UFO Sighting's Footage/UFO News YouTube Channel/Ufosfootage/Canva.
I really hope that I'm opening people's eyes to the massive influx of these round, spherical shape Orbs that look like white balls during the day and at night time they look like doughnuts lit up by white, red orange or flickering lights. There's no rhyme or reason with these "button UFOs" which is the name that I coined for these last year around October time in 2021. I was again, inundated with these UFOs that had a single small hole inside of the Orb and because there wasn't a few smaller holes inside like on a normal button, it still resembled a button and that's why I called them button UFOs.
Related post
UFO Fleet Passing ISS 3 Days Ago 6th May 2022 - In Extremely Close Encounter
My theory about these Orbs is a simple one and it's totally in line with what us humans have already done as a species on our own technological journey. And we're still doing it to this day because we're going to be sending out our own version of the UFO Orbs, eventually. Take the Starlink satellite WiFi link around the world. Okay, these are square cubes, but it's only the shape that is different from the round sphere's.

To send out satellites into space, to orbit a planet and survey the heck out of it or "them" as in multiple planet's and then send back to Earth all the data that they've been collecting, that means we're doing just the exact same thing as these UFOs - potentially, if that's what the UFO Orbs are doing?

Are these UFO Orbs (Orbs in particular) surveillance drones?
For another advanced Alien species to be potentially sending out to Earth the many UFO Orbs witnessed by many different people (in the hundreds if not thousands) - they must have a lot of information on humanity already?
This train of thought is absolutely in line with the natural processes of a "newly formed species" that transcends from not being able to leave it's home planet to a species that can now leave it's home planet. Relatively speaking, human beings are a young species, we're barely out of caves and we've only been driving cars for just over 100 years.

Alien's protecting their part of space or just understanding any potential threats out in space and around them is in line with what we do.

So, applying our own behaviour patterns to a wider audience, based on our own surroundings, if we send out surveillance satellite drones like Voyager 1 then maybe it's happening right back to us and guess what, the UFOs that we keep seeing backs up that theory and the US Government UAP videos back up that theory also. That's a possible scenario with 2 answers that back it up.

They are drones to them but UFOs to us humans) that way they (Extraterrestrial entities) can focus on other methods of traveling through space and probably like us, they can design and build other space craft's. Other vehicles designed to travel in space like satellites, telescopes, International Space Station, Probes to land on Moons, probes and helicopters that can land on Mars and fly in Mars atmosphere.

These UAPs or Orbs "Tic Tac shape" UFOs have probably been sent out as surveillance satellites or "drones" to call them by their secondary nick name. Because of all the satellites that humans have sent out into space or just into orbit around the Earth are basically surveillance drones that either emit or receives a signal packed full if information about specific things (ie the sending and receiving or gathering information satellites) or if it's just a relay? It doesn't matter because they all follow a simple process. So, based on this underlying, basic and fundamental plan, it's fair to say (based on valid evidence, not opinions) that Extraterrestrials could be following this simple underlying and very basic step by step plan. It's what we have done and are still doing.

The satellites that we've sent out into space either gather information through sensors or emit signals through transmitters and some are relaying signals just as a relay and that's either in part or as a whole or even stage by stage which only happens after certain parameters are met, set and created after the fact through learning as it goes.

Transmitters and receivers are key. A transmitter encodes a message onto electromagnetic waves through modulation which controls the strength and in turn changes properties of the "wave" to represent the data. These waves flow through space toward the receiver. Okay, if we can communicate with the Voyager 1 satellite that's 15 Billion miles away from Earth, and with our basic technology can you imagine how far an Extraterrestrial craft can travel and still stay in contact relatively easy.
I've just written all that because I want you to know why I believe that these UFO Orbs are surveillance drones sent by an Extraterrestrial species. Yes, we've had UAP disclosure where our US Government has declared that these Tic Tac shaped UFOs are not theirs, they're not from another country and they don't have control over them. That's ruling out everything which is designed to leave only one answer and that's Extraterrestrial craft's. So please don't blush or be embarrassed talking about Aliens existing because they do.

We've created a satellite called Voyager 1 (call them what you like) but the official name satellite should be replaced with "miracle." We can still communicate with it at 15 Billion miles away from Earth! Now that's a miracle.

Related post
UFO Mothership Is Dropping UFO Orbs During Huge Thunderstorm
2 Women Film 2 UFOs And Talk About What It Is | They're Real IsWhat I Think
White UFO Tic Tac Craft Filmed From A Plane Window Boston To Denver
Or, they're just decorative "look good" trinkets.
Look, nobody in the public knows specific thing's about these UFO Orbs that are fact - except for the real deal and in the know trusted fellows. We're talking about knowledge that would instantly change the course of humanity. Changing the course of 8 Billion people whom now know for a fact that Extraterrestrials really do exist and they could be amongst us. That's a scenario that I genuinely don't know if I want to experience because I know human beings and I've seen paranoia close up it's not very good. It can make normal everyday people become scared, unpredictable and that's the worst side of any human being. Scared, unpredictable and cornered. But would it be like that if the Government does release that type of information? I doubt it, but you just never know what human beings are capable of.

So, why can't these many UFO Orbs be doing just the same as what we're doing? Albeit though it's on a different scale, we're powered by solar panels, batteries and the UFO Orbs could have some exquisite 👌🏻 technologically advanced propulsion systems straight out of a sci-fi film! There could be an Alien race (species) 500 years ahead of us in terms of space technology ie anti gravity engines and other systems as yet to be invented. But if the Alien's goals are the same, similar sized brains then we really could be looking at our future where we discover an Alien Planet and we send smallish, metallic type material used in the design of spherical shaped Orbs packed full of the shrunken technology...

If you know anyone who would appreciate this post please share it with them, thanks. Also if you have any thoughts and opinions on this, please leave them below in the comments section, cheers.
Credit: AC Jewels And Emeralds/UFO Sighting's Footage/UFO News YouTube Channel/Ufosfootage/Canva.