In 2014 an eye witness films 3 UFO Orbs that are flying over the capital city of England, London. These UFOs are real and not fake drones at all.

Here's the extraordinary evidence of Extraterrestrial entities which are very much without doubt here on Earth and in control of these metallic silver Spherical shape Orbs.

I'm not mixing my word's here, Aliens are on Earth and I know that not every UFO sighting means it's instantly got to be an Alien but yes, this group of three UFO Orbs definitely does mean it's Alien. 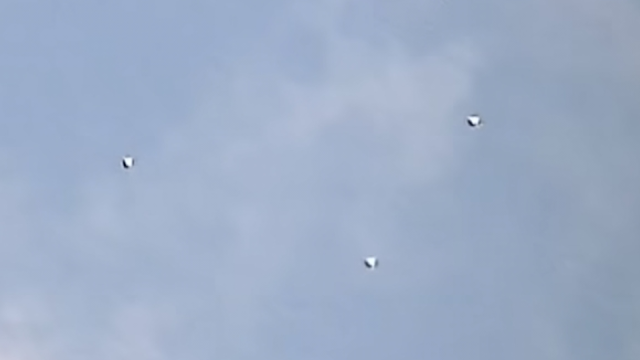 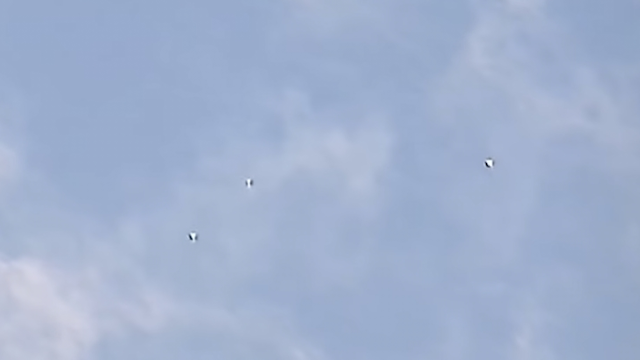 There's always something new happening in the skies of any country and at any time on any given day or night - you can do more than take that to the bank, you can float it to the Moon! Two of the silver metallic UFO Orbs (or ball's made of metal) come floating in from the left at the bottom and between the branches of the tree we can clearly see that these are under their own steam (common phrase) and then the other one  of the screen while another one literally just appeared in the left of the screen while the other two seems to recognise that it's just literally turned up or "appeared" so they stop and start to go back to check it out.

All the while the UFOs are seemingly making decisions because what balloons fly one way then turn back to go the opposite direction when another balloon suddenly appeared... Oh you better believe that it's a truly strange sight! I only referenced balloons as an analogy because it's the best way to describe this scenario. Balloon's can't change direction, the only thing that could achieve this type of manoeuvring in the sky would be a UFO that's under intelligent control? Or it's autonomous and learning as it goes? Certain UFO Orbs are surveillance drones sent by Extraterrestrial entities just like what we do with say "Voyager 1 satellite or Voyager 2 satellite?"

5.6 Miles Above Atlantic Ocean Is A UFO With Piercing Blue Light

We're still able to control and communicate with these satellites and they're 14.4 Billion miles away from Earth! So you best believe that even with our puny (just out of the cave technology) we're still very much able to control and communicate with machines and devices that we've sent away into deep space and under it's own propulsion systems which are 14.4 Billion miles away! Extraterrestrial life that's way ahead of us would have no problems controlling UFO satellite drones here on Earth.

UFO Orbs are everywhere in the world at the moment, it's likely that we're all seeing surveillance drones just like the one's we've sent out to survey the deepest parts of space called Voyager 1 and 2.

And also, the UAP videos released by the US Navy on behalf of the Department of Defense DoD showed us UFOs that can only be seen in the Infrared part of the spectrum. Seriously, the UAP Tic Tac shaped UFOs was filmed using Forward Looking Infrared cameras or Flir cameras attached to the underside of the US Navy Jet's. That's why the videos that we all saw was in black and white, because it's Infrared.

Here's the extraordinary video which was uploaded to YouTube by Today's UFO Videos:

A group of white orb UFO's is captured on tape flying across west London in December 2014. They appear to be operated under intelligent control and show propulsion trails in certain parts of the clip.

If you have any thoughts or opinions on what this is in the video, if you've seen other metallic silver UFO Orbs and you've got a story to tell, please share it with us all in the comments section below, thanks. Also please share this post with someone who would appreciate it, cheers.