Witnessed by a local who got the images that we see, the witness wishes to remain anonymous and has given us (UFO SIGHTINGS FOOTAGE) the photos.

STRANGE AND UNUSUAL LOOKING "MONSTER" SKELETAL REMAINS, WASHES UP ON A UK BEACH ON THE 4th MARCH, 2018.
The Montauk monster, the two headed Porpoise, the Faceless Fish, the Mermaid skeletons which wash up all the time etc?


Witnessed by a local who got the images that we see, the witness wishes to remain anonymous and has given us (UFO SIGHTINGS FOOTAGE) the permission to use these images exclusively. UFO Sightings Footage believes that this is some sort of an awful experiment gone wrong? Why do we believe that? Because we've compared this "thing" to other obvious candidates and come up empty handed? There is other evidence from around the world, also? Things like:
Check this link for other strange creatures washed up around the world?
This is creepy because it looks like it has a human skull? It looks like it has a human rib cage - BUT it has a blooming massive finn where feet should be? So what is up with that? It doesn't make any sense at all? We have checked out many skeleton images to find similarities and actually we've come up stumped! There is a few candidates but the (shark, seal) got ruled out because as we explain later on, they don't match up.
Is this a bona fide Mermaid? Is this a creepy specimen of fish that we just don't know about as yet? Have you heard about The Mermaid of Great Yarmouth? That is the only thing that this looks anything like? I'm adding an image of that just below the images of the "Fylde Coast Monster" (that's the name we have given it).
THE FYLDE COAST MONSTER

Image no1
This seems to have a skeleton similar to a human with a skull? But, all similarities end there! After that the only thing left is a weird fin, like a fish fin? The colour of this thing is oddly natural looking? It clearly has some flesh or bits of flesh still attached to it? The skin seems to of disappeared at the top half of the "thing"? The skull seems to have a hole for eyes, maybe? It could be for ears or the actual hole which killed this? If that is the case then is this a hunted specimen which got away from the hunter maybe? The /thing is, who hunts on the water with a gun? Unless your specifically after a "monster"?


The ribs of this "thing" is what made us rule out it been a shark or seal skeleton?
Go ahead and check it out for yourself? We've added some images of a shark skeleton and a skeleton of a seal below so you can compare and do a little research for yourself? 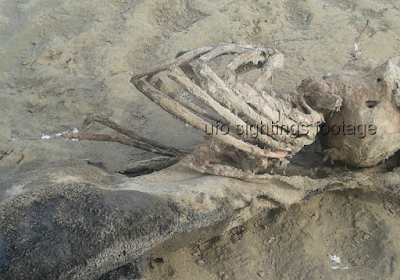 Image no2
Similar characteristics to a rib cage of a human... 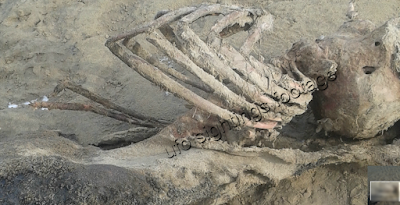 Image no3
You can clearly see a single fin at the back of the Mermaid, Creature, Monster-ish or just unusual looking "creepy" monster? Either way, whatever one calls it, it is a very monster looking freaky ANOMALY?
It's this image number 3 which has us reeling and it really takes us aback! It looks positively ALIEN! Like literally, from the movie Alien where the Alien creature bursts out or from the chest of it's victim?


I mean, look at it? I believe that image number 3 was taken the day after the first photos were taken? That's my assumption? I think the witness went back to see if it was still there and by this time the water had come in and gone out but only turned the skeleton over (it's worth noting that the tide where the skeleton was photographed only comes in at the most 2 feet all in?
It is very shallow on the Fylde Coast right next to Knott End On Sea? 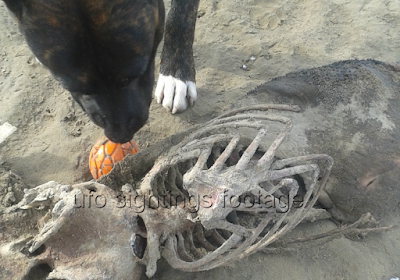 Here is another mermaid in the image below to show that the UK is regularly a host for Mermaid skeletons!
The Great Yarmouth Mermaid (image just below) washed up on another UK beach AS WELL (Norfolk Beach)? Very strange don't you think that another Mermaid type creature washes up on another UK beach (Fylde Coast)? Why is the UK a magnet for strange, ugly looking sea creatures?
Why is there a strange skeleton washing up full stop?

I thought nearly all fish, animals of this size has been identified already? 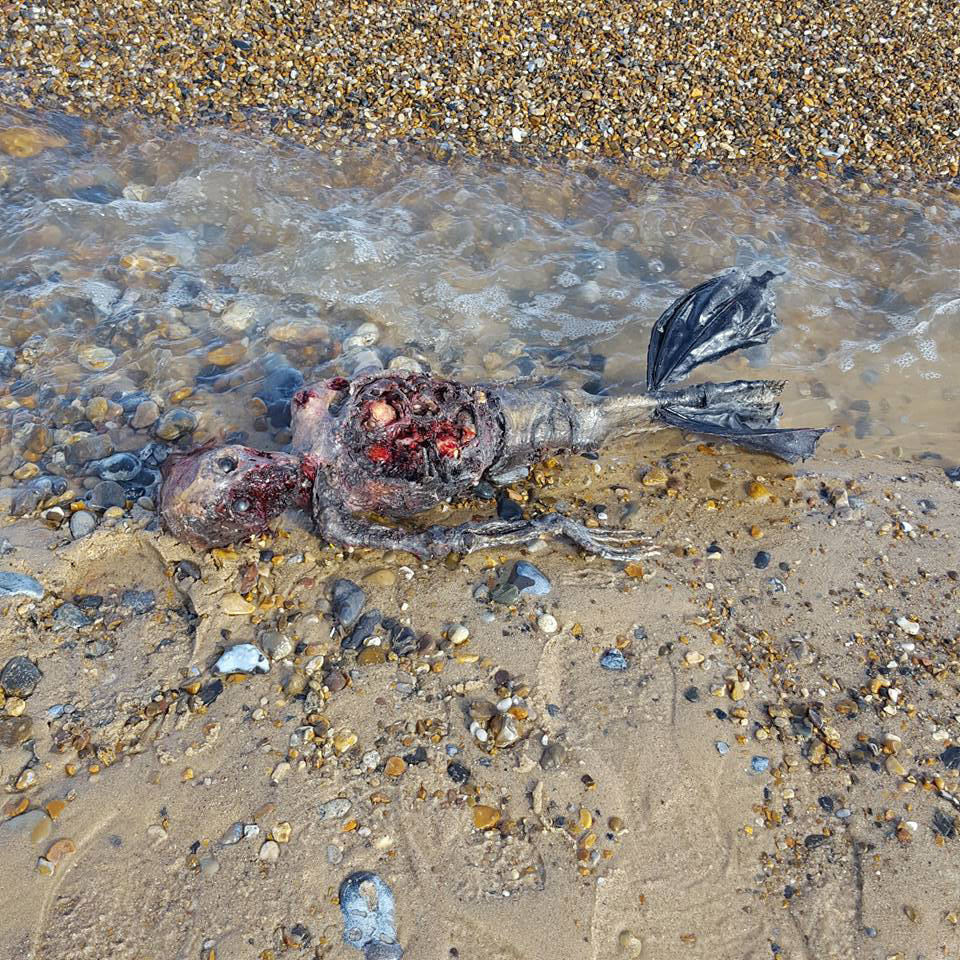 I was sent these images last night which was the 4th March 2018 from a person only identified as Darren. The images immediately "got me" thinking in overdrive! I checked the skeletal structures of Sharks which are a group of elasmobranch fish, did you know that? I didn't know that until I have been researching this amazing, strange, unusual and really intriguing skeletal image? The Shark skeleton never looked similar to ours skeleton at all?

This video shows other weird creatures washed up from the deep dark oceans?

So then I looked and checked a Seal skeleton? 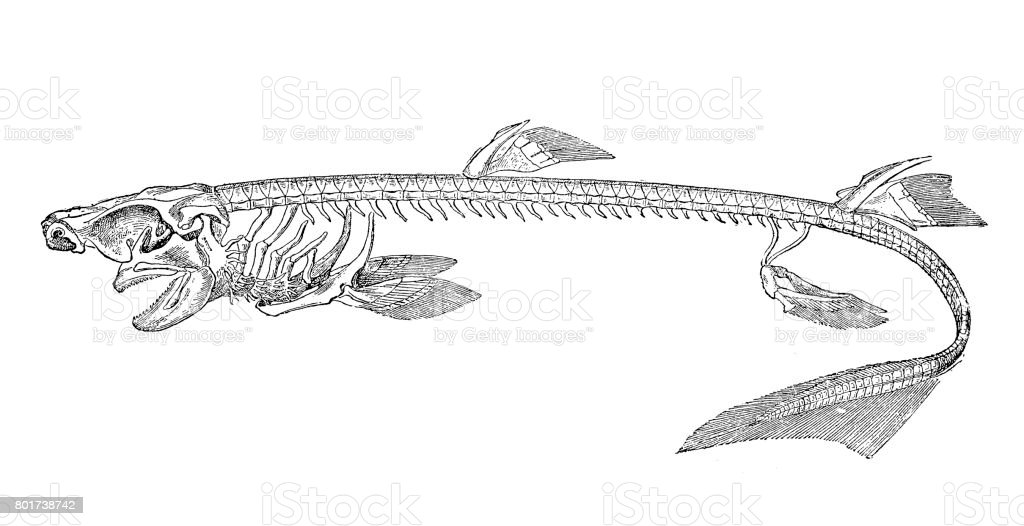 So I checked a Seal skeleton and it looked nothing like our skeleton at all!

If you look at the image just above of the real seal, you can clearly see that there's spikes on the spine in comparison to our skeleton which clearly has no spikes or whatever you call them? This one comes close but not exact - which is what one would need to compare and have the same results, this is way off!

So that's our evidence and research and we can't figure this out? We need your expertise and please tell us what you think about this? it's the skull that throws us right in to confusion? It's also the ribs that really get us scratching the old noggin for answers? We just simply do not know what this is at all? It's perplexing and to us, it's just as Alien as a real Alien!

Please share this and if you can, let us know in the comments what you think it is?