Betelgeuse: The Eventual Supernova At The End Of It's Life

Professional astronomers also keep a close eye on the star, as it is notoriously variable: its diameter changes from anywhere between 550 to 920 times the sun's diameter. In 2013, astronomers said Betelgeuse is likely to crash into a "cosmic wall" of interstellar dust in a few thousand years. 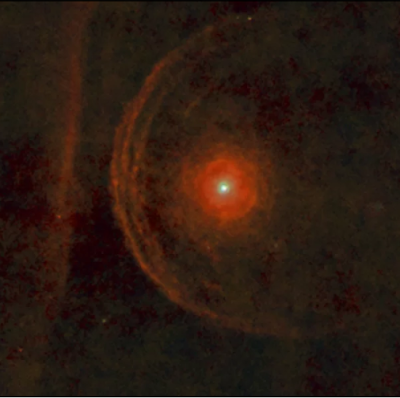 This is an epic star.
Betelgeuse is a star nearing the end of its life. Because it is creating heavier and heavier elements in its core that could be used for stars after it dies, a NASA story once dubbed the red giant a workaholic. The star is a famous one among amateur astronomers not only for its size and brightness, but also because it is part of Orion, a bright winter constellation in the Northern Hemisphere.

Professional astronomers also keep a close eye on the star, as it is notoriously variable: its diameter changes from anywhere between 550 to 920 times the sun's diameter. In 2013, astronomers said Betelgeuse is likely to crash into a "cosmic wall" of interstellar dust in a few thousand years.

Locating Betelgeuse Ancient astronomers would have easily spotted Betelgeuse because of its size and relatively close distance from Earth: it is about 600 light-years away and has a variable brightness generally peaking at 0.4 and falling below 1.2. Some 20th-century observations by the American Association of Variable Star Observers suggested peak magnitudes of 0.2 in 1933 and 1942. It is the 12th brightest star in the night sky. 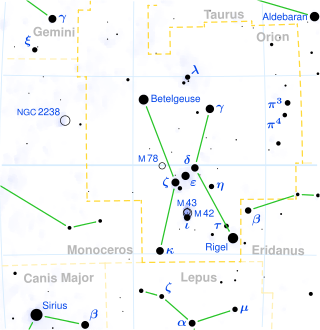 The Brightest Stars in the Sky:
A Starry Countdown.

The star's location is:

It is probable that the name "Betelgeuse" originated in Arabic words, but the star had other names (for example) in Sanskrit, traditional Chinese and even in Hawaiian; in the latter, it was known as Kauluakoko. The coming supernova When astronomers say Betelgeuse is expected to explode soon, they mean shortly in astronomical terms: within a million years, according to several sources.

Predicting exactly when it will turn into a supernova is difficult, however, as it depends on precise calculations of its mass as well as an understanding of what is going on inside the star. Betelgeuse is so vast its size would extend beyond Jupiter's orbit if it were placed in the sun's position in the solar system that several telescopes have captured images of the star and spotted it shedding mass. Starting in 1993 and continuing for at least 15 years, its radius shrank by 15 percent, an astonishing amount for so short a time.

"We do not know why the star is shrinking," said Edward Wishnow, a research physicist at UC Berkeley's Space Sciences Laboratory, in 2009.

"Considering all that we know about galaxies and the distant universe, there are still lots of things we don't know about stars, including what happens as red giants near the ends of their lives." Nearing the wall As the star prepares for what could be a large explosion, another challenge awaits: it is expected to crash into a wall of interstellar dust in the next few thousand years.

An infrared Herschel Space Observatory image released in 2013 suggested it would crash into the dust at a speed of 66,960 miles per hour (107,761 kilometers per hour.) The crash would take a while to complete: the solar wind is expected to touch the line around 5,000 years from now, with the heart of the star crashing into the bar 12,500 years after that.

Recent studies Ongoing observations of Betelgeuse reveal that we still have much to learn about its structure. Observations of the red giant revealed that gas that is leaving the star is colder than astronomers thought it would be. Scientists aren't sure how so much mass left the star, while not generating a lot of heat, they said in a 2016 study. Possible explanations include magnetic fields, or shockwaves, but more work will be needed to confirm the models. Astronomers are also doing comparison studies with another red supergiant star, Antares, to better understand the situation.

Meanwhile, scientists remain puzzled by Betelgeuse's ultra-fast rotation, which is about 150 times faster than expected. This may have happened if the star swallowed a sun-mass star about 100,000 years ago, according to a 2016 study. Given Betelgeuse's huge size — it's 1,000 times wider than our sun, or 860 million miles (1.4 billion kilometres) across — it should be spinning much more slowly, astronomers suggest. In 2017, the Atacama Large Millimetre/sub-millimetre Array Telescope (ALMA) took its first image of Betelgeuse's surface, which astronomers said was the highest-resolution image yet obtained of the star.