The Relic of Bir-Hooker Proof of a Race of Giants?

The bartender showed the driver a crumpled note with the address and the journey began. The journey was a 2 hour ride to the district Bir Hooker, a place near Sadat City, located about 100 km northwest of Cairo. They stopped at a farm where Spörri met an elderly farmer named Nagib. Nagib is a descendant of an ancient family of grave robbers.
PART 1.

In April 1988 the Swiss club owner Gregor Spörri traveled to Egypt armed with a number of books recommended by a friend to learn about the ancient Egyptian culture. It was a journey that would change his life forever. 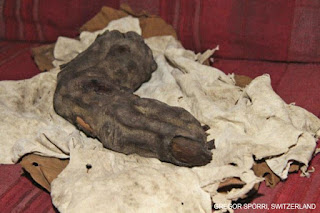 During this trip to Egypt, Spörri was often found in the Great Pyramid where he wanted to find out whether there was any bio cosmic energy inside it. To achieve his goal he crawled through shafts, bribed overseers, and spent endless hours in various sarcophagi waiting for evidence of a power supply. In vain. Spörri believed that if you put a bottle filled with water on top of the Great Pyramid it would explode because of the cosmic energy. He performed the experiment but sadly nothing happened.

Spörri's journey was almost over when the bartender of the hotel where he was staying told him that he knew of an interesting excursion for him (the bartender had been watching him and noticed he was interested in extraordinary cases). Spörri was curious and decided to make the excursion. On the second-last day of his holiday, early in the morning, a taxi picked him up to take him to his destination.

The bartender showed the driver a crumpled note with the address and the journey began. The journey was a 2 hour ride to the district Bir Hooker, a place near Sadat City, located about 100 km northwest of Cairo. They stopped at a farm where Spörri met an elderly farmer named Nagib. Nagib is a descendant of an ancient family of grave robbers. From a legacy of his ancestors, Nagib inherited two wooden boxes full of valuables that provided him a good income over the years. The stolen treasures were sold to Western tourists and the proceeds bought Nagib land. However, there was one item he never sold which has been in the possession of his family for 150 years. Only a few people have ever seen this object. Nagib was in financial difficulty so he proposed that Spörri could see this particular object, photograph it and hold it for a fee of $ 300. Spörri sat on a wooden bench as Nagib pulled out a wooden box and lifted the lid. As a musty smell rose in the air, he took out an elongated packet, wrapped in a leather cloth with lace around it. Underneath the leather cloth, old rags were wrapped around a strange looking object. When Nagib unwrapped the package, a gray-brown oblong object emerges. He layed the object carefully in the hands of Spörri who examined the object with curiosity. He suddenly realised he was holding a gigantic mummified finger.


It was not an ordinary finger as it measured at least 35 centimetres long and was about 6 centimetres thick. Spörri observed the finger in detail and was able to determine that what he was holding was old, organic and humanoid. The finger looked like it had been cut off with anatomical precision, and in some places was crumbled. The leathery skin was ripped in places and the skin was a few millimeters thick. Between the dried skinfolds he could see remains of fungus and the nail was loose. The surface of the skin was damanged in some places, as if mice had gnawed on it. The bone felt woody. Spörri was dumbfounded as the abnormal size of the finger would have meant that its owner must have reached at least 5 or 6 metres in height. His skepticism led Nagib to show him another item contained within the wooden box – a leather file folder containing a number of documents. Inside the folder was a certificate of authenticity, some papers with Arabic and Latin letters, a Polaroid photo of the finger and an X-ray made in the 60s. The farmer's son had some research done through a friend in the hospital of Cairo. When Spörri compared the finger to the x-ray he could see that the proportions and shape were correct and that the x-ray was of the finger he was holding. 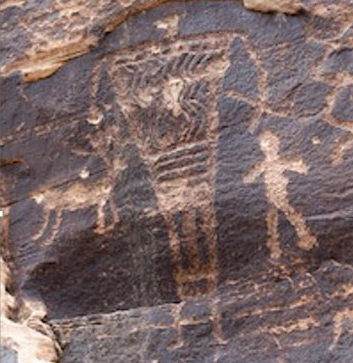 Part 1 of the relic of Bir Hooker outlined the true account of Swiss club owner Gregor Spörri and his encounter with an elderly farmer in Egypt, Nagib, a descendant of an ancient family of grave robbers. Nagib showed Spörri a relic that had passed down through his family – a wooden box containing a mummified finger that measured 35 centimetres in length, along with documents proving its authenticity, including x-rays carried out on the artefact in the 1960s.

Nagib refused to tell Spörri where the finger was found but made allusions to a hidden room in the basementof the Great Pyramid where huge, empty graves are located. Nagib made it clear that the relic was not for sale as it was too important for Nagib's family. Before he returned to his hotel, Spörri took a number of photos where he put a banknote next to the finger in order to indicate the size. 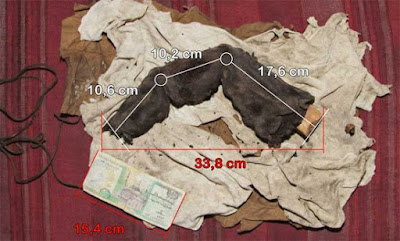 On the way back to Cairo, Spörri realized that what he had seen was very special. In the years following his viewing of the giant mummified finger, Spörri did not speak much about what he had seen. The times when he did speak about it showed him that scientists were not interested in it, simply because it did not fit in with their existing theories. So instead Spörri embarked on intensive research into the possibility of the existence of giants in ancient times.

He studied sacred texts like the Bible (the Gospel of Judas), the Torah (Talmud), the Koran, and many other writings containing tales and mythologies. He was surprised to discover that there are in fact frequent references to giants.

The Bible speaks about Nephilim (the Hebrew word for giant but also for fallen), a race of giants created by the mixing of the sons of Gods and the daughters of men. Researchers and historians have presented different theories to explain what these Nephilim really were, ranging from fallen angels (unfaithful to their origins), the descendants of Seth (the third son of Adam and Eve), or a product of extraterrestrials interbreeding with humans.

Genesis 6:4
In those days - and also afterwards - there lived giants on the earth, because the sons of God had intercourse with the daughters of men and they bore sons to their community. They were the famous tyrants of old time. Even after the flood you can find reports of giants, this could be because the Nephilim were spiritual beings and therefore were not bothered by the flood, unlike their earthly offspring.

The Israelites came across these giants when they explored their promised land.
Numbers 13:33
We also saw the giants there, Anakim, which come of the giants, and we were like grasshoppers in our own eyes and in their eyes. In the writings of Enoch and Moses we can also read about giants.

In 79 AD. Flavius ​​Josephus mention giants in his writings about the Jewish war: There were giants. Much larger and shaped differently than normal people. Terrible to see. Anyone who has not seen it with his or her own eyes can not believe they were so big. 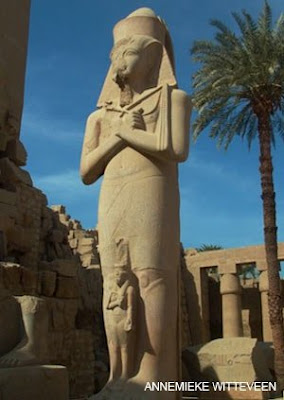 Through the ages, writings in which giants play a role have resurfaced time and again. Pausanias, an ancient historian wrote in 200 AD about 5 metre tall, humanoid skeletons found in modern Syria; The Greek mythology known as the Titans.

Germanic mythology has numerous giants, living in Riesenheim.
Don Antonio de Mendoza discovered giant skeletons in Peru. The Dutch navigator Willem Cornelisz Schouten claims he had seen skeletons of at least 3.5 meters. Giants are depicted on rock drawings in Ohio. There was a huge skeleton found in Minnesota in 1968.

Radiocarbon dating could not continue because the skeleton vanished during its transportation. The Annunaki are a race referred to in the Sumerian texts that apparently landed on earth in the area between the Euphrates and the Tigris. They passed their knowledge to the Sumerians, an early civilization with very advanced culture.

The Sumerians depicted humanoids of at least 3 times as large as the average person in their art and carvings. Statues in Egypt depict ‘gods’ as tall beings. Historians will tell you that this is to indicate that they were important, but it is also possible that they were representing their actual height. Often there is a man of normal height to create a context.