The best visualization of Jupiter... 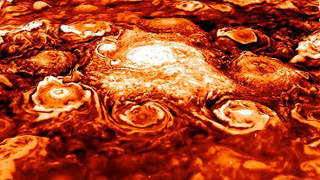 This computer-generated image is based on an infrared image of Jupiter’s north polar region that was acquired on February 2, 2017, by the Jovian Infrared Auroral Mapper (JIRAM) instrument aboard Juno during the spacecraft’s fourth pass over Jupiter.
Credits: NASA/JPL-Caltech/SwRI/ASI/INAF/JIRAM
Full size image can be found here.


For hundreds of years, this gaseous giant planet appeared shrouded in colorful bands of clouds extending from dusk to dawn, referred to as zones and belts.

The bands were thought to be an expression of Jovian weather, related to winds blowing eastward and westward at different speeds. This animation illustrates a recent discovery by Juno that demonstrates these east-west flows, also known as jet-streams penetrate deep into the planet's atmosphere, to a depth of about 1,900 miles (3,000 kilometers).


Due to Jupiter's rapid rotation (Jupiter's day is about 10 hours), these flows extend into the interior parallel to Jupiter's axis of rotation, in the form of nested cylinders. Below this layer the flows decay, possibly slowed by Jupiter's strong magnetic field. The depth of these flows surprised scientists who estimate the total mass involved in these jet streams to be about 1% of Jupiter's mass (Jupiter's mass is over 300 times that of Earth). This discovery was revealed by the unprecedented accuracy of Juno's measurements of the gravity field.