The Antikythera Mechanism has just been worked out as to what it was and a scientific document has been published. New information is available.

If you had any suspicions about ancient Aliens and Alien interference with mankind's development then this could be your chance to prove it.

There's just been a brand new scientist paper 5821 by Tony Freth, David Higgon, Adam Wojcik in the 12th March 2021 so it's as up to date as it can be. It's a fascinating piece of scientific evidence that... You need to read that yourself so I don't want to spoil it.

A 2,000-year-old device or "mechanism" if you want has often been referred to as the world's oldest and first "computer" has been recreated by scientists trying to understand how it worked. 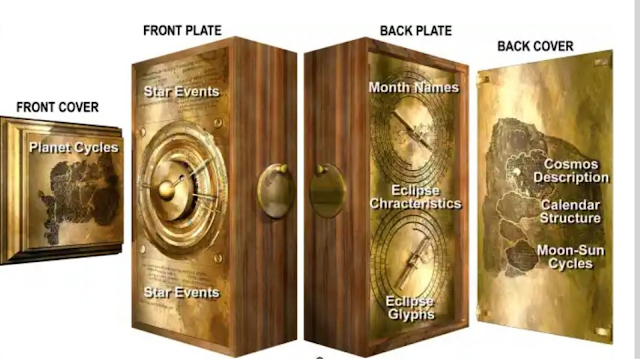 
A 2K years old computer, this is not a trick of words, clever implications or stretching of the truth by any imagination. This is exactly what you would expect it to be, a very, very old computer. The back of the brass sheet has scratches on it and on this brass sheet is a diagram with knowledge of the cosmos.
It's almost like this was possibly given as a gift with Extraterrestrials home address on it in a return to sender if not completely satisfied type of thing! 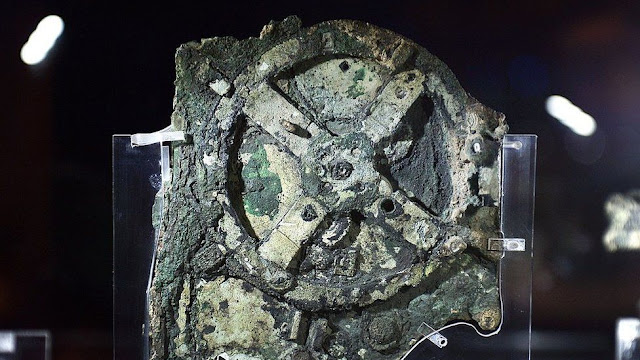 Credit: AFP. Only about a third of the device has survived and it is in more than 80 fragments.


It's more than likely observations of the celestial bodies as seen through the eye's of ancient mankind. This computing - computer device is probably the first of it's kind in that it accurately describes when and where planets will be in days, weeks and months and even years to come.
So my own observations are this:

Inscriptions on the Antikythera mechanism. (a)

FRONT PLATE: Parapegma1,2,25, above and below the Cosmos Display, indexed to the Zodiac Dial.

The monumental task (Herculean task if you ask me) involved a lot of people from around the world and a lot of ancient knowledge. Plus a dedicated team of brainiac's who recreated the other missing 2 thirds of the Antikythera Mechanism.

The Antikythera Mechanism has baffled experts since it was found on a Roman-era shipwreck in Greece in 1901.


The hand-powered Ancient Greek device is thought to have been used to predict eclipses and other astronomical events. But only a third of the device survived, leaving researchers pondering how it worked and what it looked like.

Check out a modern reconstruction of the Antikythera Mechanism below, in the YouTube video by Jo Marchant.


Ancient Aliens in my opinion influenced and steered mankind in the future that works for them. Somewhere, somehow the truth will become apparent. Underground bases, hidden in plain sight, hundreds of thousands of UFO related reports sent to anyone and everyone that will listen. The US Government released 3 UFO videos and said "we don't know who or what they are".
There's a lot going on in Ufology and UFO and Alien believers alike know this to be true.