UFO hovering in the sky over Mexico 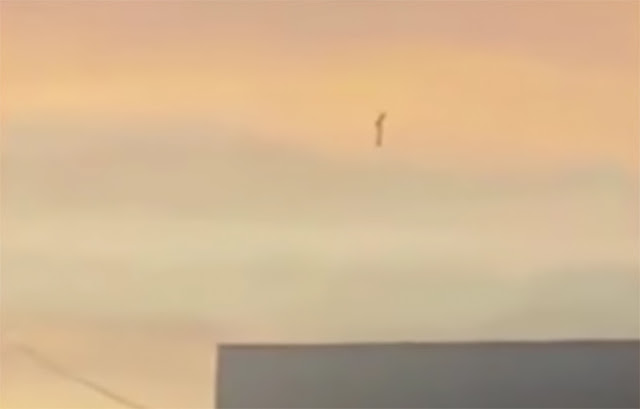 A video shot by a woman in Mexico has gone viral as the “first alien sighting of 2018.” The video, which was shot on a smartphone by a woman on the road in Baja California, appears to show an oddly shaped object floating in mid-air that doesn’t resemble any known aircraft. But is it a UFO of the Alien spying on us, in a peeping Tom kinda way?

Some (don't know who?) suggest that the small, slender object is indeed an alien craft, which others say isn’t a craft at all, but rather people testing some type of jet pack. Others say the video is an obvious fake, though nothing has been determined conclusively at this point.

UFO Sightings Footage is of the opinion that that this is a real freaky, strange and very puzzling UFO sighting? Is it real, yeah. Is it an Alien, no. Is it of other worldly origins, no. This is what we call a "genuine" misunderstanding of the obvious kind! Someone has gone to the lengths to plan, create and build an obvious Alien looking space craft that "they" know because everyone nowadays has a smartphone or cell phone with a camera that the likelihood of this being mistook for a real UFO is high?

This is a by proxy, UFO laughable episode so-to-speak? Some miscreants have exploited peoples naieveness and turned an inexpensive drone (probably) in to a good looking UFO which they know someone (maybe) someone that's not the sharpest knife in the drawer will misidentify this as a real UFO and the rest as they say, will do the job for them!

It's just as simple as that!

We're seeing this more and more here at UFO Sightings Footage. People are convinced they've had a real UFO encounter and some have had bad experiences with this also. Is it good or funny? NO! Is it smart or team building? NO!

Can you blame them? NO! It's (at the time) the best thing since sliced bread? The drone might be on it's last legs and what better way to go out with this drone than turning it in to someones own UFO encounter! Imbeciles.

Link to the video:

Experts have gotten in on this one aswell. Experts are saying this is a great sighting. So-called experts are having a field day! All we can say is this.

If you think it's a fake, if your gut is telling you it's not real and common sense is ruling out Aliens and the likelihood that this thing is from another Alien planet? Well then, we suggest you go with your gut! Always go with your gut. If your wrong then your wrong, but will we ever know one way or another with this? Who knows? Time might be the answer to this?