Does the U.S. Military Need a Space Corps? Trump Is Gonna Start The Space Cops 🛸👽🌚

The idea for a new service devoted to space is not new, and support for it does not break down along partisan lines. It first gained currency in 2000 as a recommendation from a military-reform commission headed by Donald Rumsfeld, who was then a retired ex-defense secretary and White House chief of staff under President Gerald Ford. A year later, Rumsfeld would be recruited back to government as George W. Bush’s defense secretary and set about to overhaul the bureaucracy of the Pentagon a reform that might have included the space corps. But the attacks of September 11, 2001, and the launching of long wars in Afghanistan and Iraq sidetracked that effort.

A proposal in Congress would create the first new uniformed service in 70 years, but it faces opposition from the Pentagon. The U.S. military hasn’t added a new uniformed service in 70 years, when the Air Force was created in the aftermath of World War II. If Congress gets its way, that will soon change. In a bipartisan vote last month, the House of Representatives approved legislation that would direct the Defense Department to build a new “space corps” within the Air Force.

Its backers blame the Pentagon for failing to prioritize space security in recent years, a lapse that has allowed rivals like Russia and China the opportunity to catch up to U.S. superiority.

The proposal’s fate now rests in the Senate, but its most powerful foe is the military itself, which says Congress should simply send more resources rather than force it to undertake a bureaucratic overhaul during a time of war.

“The military has not done a good enough job looking after space with all its other distracting priorities,”
said Representative Jim Cooper, a Tennessee Democrat who has championed the idea of a space corps along with Representative Mike Rogers of Alabama, the chairman of an armed-services subcommittee in the House.
“It’s just not getting the attention it deserves.”

Space has become as integral to military operations as it has for anyone who uses an iPhone to get directions through GPS or an up-to-the-second weather forecast. “Our military now is completely dependent on space,” said Todd Harrison, director of the Aerospace Security Project at the Center for Strategic and International Studies, a Washington, D.C.-based think tank. “We can’t fight without fighting through space. When we put a bomb on a target somewhere in the world, did that bomb come from space? Not physically, but the bomb would not have gotten there without our space capabilities. So it is a space-enabled bomb.”


The idea for a new service devoted to space is not new, and support for it does not break down along partisan lines. It first gained currency in 2000 as a recommendation from a military-reform commission headed by Donald Rumsfeld, who was then a retired ex-defense secretary and White House chief of staff under President Gerald Ford. A year later, Rumsfeld would be recruited back to government as George W. Bush’s defense secretary and set about to overhaul the bureaucracy of the Pentagon a reform that might have included the space corps. But the attacks of September 11, 2001, and the launching of long wars in Afghanistan and Iraq sidetracked that effort.

The proposal has bubbled back up over the years, but last month was the first time it had ever passed the House as part of the National Defense Authorization Act. An amendment to create the space corps, sponsored by Rogers and Cooper, was adopted by the Armed Services Committee with the support of all but one member, Republican Representative Michael Turner of Ohio. And in a sign that the party leadership backed the idea, the House Rules Committee refused to allow a floor vote on Turner’s bid to strip the space corps from the bill.

In phone interviews, Rogers and Cooper cited the emerging threat from Russia and China as the reason for the newfound political momentum. Rogers said lawmakers had received alarming classified briefings about the two countries’ capabilities and said the Air Force was consistently six to eight years behind in deploying its own new capabilities. Both countries, he said, had recently gained “peer status” with the United States in space. The worry is that either country could neutralize key U.S. satellites. “They recognize they cannot take us on and it be a fair fight,” Rogers told me. “But if they take our eyes and ears out, they actually have a chance to have a fair fight with the United States. We don’t ever want to get into a war where we have a fair fight.”

“If our satellites were attacked, we would be blinded, deaf, and impotent before we even knew what hit us.”

“We don’t want them to be able to neutralize one of our satellites, even for 10 or 15 minutes, blinding them while they launch or while they set up to launch,” Rogers continued. He wouldn’t detail exactly what Russia or China could do, citing the classified briefings. “They have offensive capability, and I can’t talk any more about it than to say that.” Cooper said the risk of an attack on U.S. satellites went far beyond the military. “If our satellites were attacked, we would be blinded, deaf, and impotent before we even knew what hit us,” he said. “Everything from ATM machines to Zumwalt destroyers would be paralyzed.”


He blamed the Air Force for lagging behind technologically, pointing out in frustration that the United States remains heavily reliant on Russian-built rockets to launch into space. “Elon Musk and Jeff Bezos have done more to give us extra launch capability than the Air Force has,” Cooper said. “This is stunning.” The U.S. Space Command is currently housed within the Air Force, and the House proposal calls for it to become a separate service while still reporting to the secretary of the Air Force.

As such, it would not become a new department with its own secretary, although Rogers has warned that might be necessary in the future. Rogers and Cooper’s chief complaints about the Air Force’s handling of space are both bureaucratic and cultural. For years, they say, the Air Force has raided funds from the Space Command to cover cost-overruns for other projects.

And it has failed to promote space leaders up the chain of command. The Air Force is dominated by a fighter-pilot culture, Cooper said, and it always has been. “People in the Air Force who are in space sometimes view themselves as failed fighter pilots, because the real ethic there has been to be a fighter pilot, and that’s the way to get promoted to general,” he told me. Cooper said the Air Force was even unenthusiastic about drones initially, “because they didn’t like aircraft that were not piloted.”

A new space corps would represent more of a bureaucratic reshuffling than a major expansion of the Space Command, which currently employs about 36,000 people and is headquartered at Peterson Air Force Base in Colorado. It would not affect NASA or the government’s intelligence operations in space. The goal is to protect the military’s budget for space; speed up the development and deployment of new capabilities; and establish a new culture that encourages, and promotes, servicemen and women who specialize in space.

“Bureaucracy opposes change because they think we’re meddling in their business.”

The Pentagon opposed the idea under former President Barack Obama and still does under President Trump. “The Pentagon is complicated enough,” Air Force Secretary Heather Wilson told reporters in June, according to CQ Roll Call. “This will make it more complex, add more boxes to the organization chart, and cost more money. If I had more money, I would put it into lethality, not bureaucracy.” Other top defense officials have argued that the Pentagon is already making a renewed effort in space and are lobbying Congress to instead provide more funding. “There is more work to do, and Congress has been very helpful in highlighting some areas where we need to redouble our efforts,” said General John Raymond, commander of the Air Force Space Command. “We must acquire space capabilities on relevant tactical timelines. We must be more agile in fielding capabilities into orbit.” 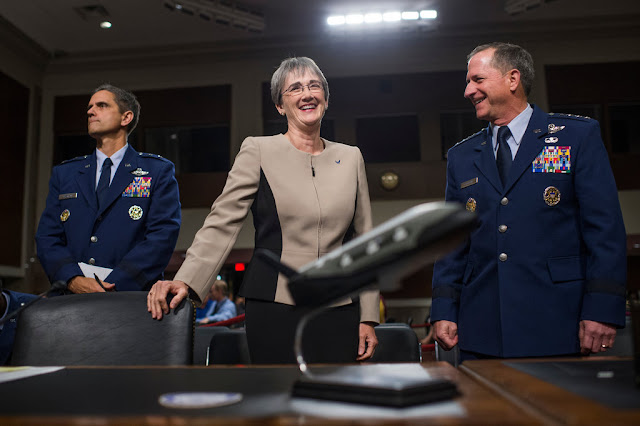 During a briefing with reporters last week, Air Force Chief of Staff General David Goldfein said the military’s goal was to “normalize” space as a war-fighting domain, not to separate it out. “Not that we would ever want to start it there, not that we want it there, but we have to be prepared to fight and win if it goes there,” he said. “Normalizing is about ensuring we don’t carve out space as something separate, but that it is actually normalized and we use the joint war-fighting lexicon, and tried-and-true tactics, techniques, and procedures.” Mostly, the Pentagon is trying to buy more time. In an official statement of policy, the Trump administration said the creation of a space corps was “premature” and that the Defense Department was still assessing the possibility as one option in a broader reorganization. And the House proposal calls for an ambitious timetable, requiring the Pentagon to submit designs for the space corps by the beginning of 2019. Whether the idea gets through the Senate is unclear.

The Senate’s version of the NDAA calls for a new office devoted to coordinating the space mission at the Pentagon, but not a new service. “They addressed a different set of issues in a totally different way,” Harrison said. “It doesn’t fix the budget issue and it doesn’t address the culture issue.” To Rogers and Cooper, the Pentagon’s opposition to a space corps is frustrating, but not surprising. “I expect the DoD to fight this to the end, and once it becomes law they’ll salute and make it happen,” Rogers told me. “Bureaucracy opposes change because they think we’re meddling in their business.” Added Cooper:


“This is more about easing the feeling of sad fighter pilots.”

Indeed, the military has a long history of resisting outside efforts to assign priority status and independence to a new war-fighting domain. In 1947, it was the Navy that fought the creation of a separate service that would strip away its dominion above the sea. The entity that emerged was the Air Force, which seven decades later is waging a similar bureaucratic battle for control—over a far more expansive territory up above. The Pentagon is complicated enough says the Air-force secretary?

Source of our information: