Exercises in the military are for one thing only? They are a "near real" simulation and a precursor for war! The aim of an exercise is to get the military personnel accustomed to the conditions of the terrain and the whole different environment in which they could and probably would find themselves in, fighting.
Guys, we've been saying this for the longest time that something really, really big is happening in the Arctic regions and yes, we had the longest pause in history right after we said it? Now look! It's a "told-you-so" moment... Not that we wanted it that way, we only wanted you to sit up and take notice and maybe keep an eye on the Arctic, Antarctic Antarctica etc regions?

There's more than meets the eye with the polar regions believe you, me? 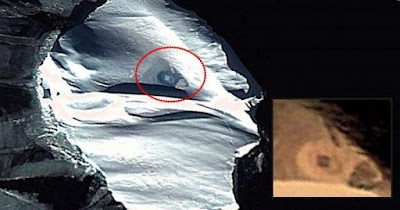 Exercises in the military are for one thing only? They are a "near real" simulation and a precursor for war! The aim of an exercise is to get the military personnel accustomed to the conditions of the terrain and the whole different environment in which they could and probably would find themselves in, fighting!

There's loads of Navy personnel from the U.S Navy and from the British Royal Navy Submarine fleet's (meeting up) under the ice floe? 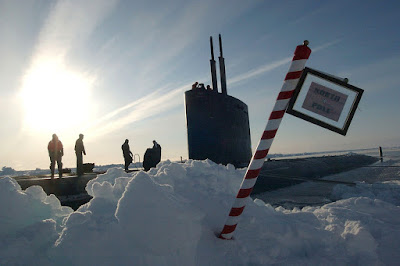 Hold on a minuet, how are they meeting up under the ice? Is there a military base under the ice that we don't know of? Why has there been so much secrecy and cloak and dagger maneuvers occurring in the polar regions over the past few years? We (you and me) have been under the impression that no one country owns the polar regions?

A recent post on this very same subject told us that hundreds of submariners have been meeting up under an ice floe:

(Hundreds of sailors from the US Navy and British Royal Navy meet under an ice floe in the Arctic Sea for ICEX 2018.)

So I am seriously and immediately thinking of the worst because technically both countries must be breaking at least one internationally recognized law? I'm not up to date with polar regions and their laws (if they even have them) but we thought that you couldn't fire any torpedoes?

Three nuclear-powered attack submarines are heading for a rapidly-melting North Pole for the US Navy's biggest undersea Arctic exercise in years. ICEX 2018, which officially began on March 6, not only involves more submarines compared to the last three Arctic exercises in 2016, 2014 and 2011, it also better simulates likely combat conditions for a major war under the ice. The US Navy submarines USS Connecticut and USS Hartford are meeting the British Royal Navy sub HMS Trenchant under an ice floe on the Arctic Sea. The subs, each with a crew of more than 100 sailors, combined are bringing along scores of researchers from government agencies and universities.

Holy crap guys, check this piece out straight from the horses mouth! They will be firing torpedoes?

"This year in another break from 2016, the submarines will be firing torpedoes, Callaghan said. Not only does that give the subs' crews valuable experience with real weapons, it also facilities realistic training for the divers who must recover the torpedoes."

Here's the official writing and sum up for the public about what this exercise is all about:

ICEX 2018 is a five-week biennial exercise that allows the U.S. Navy to assess its operational readiness in the Arctic, increase experience in the region, advance understanding of the Arctic environment, and continue to develop relationships with other services, allies and partner organizations.The Seawolf-class fast attack submarine USS Connecticut (SSN 22) from Bangor, Wash., the Los Angeles-class fast attack submarine USS Hartford (SSN 768) from Groton, Conn., and the Royal Navy Trafalgar-class submarine HMS Trenchant (S91) will conduct multiple arctic transits, a North Pole surfacing, scientific data collection and other training evolution's during their time in the region.

A US Navy submarine surfaced through the Arctic ice for the first time in 1959. Since then, the US fleet has completed 27 ICEXs. The exercises could become more important as climate change warms the Arctic.

You will find this post right here guys, check it out as it is very, very mind blowing because it's not what they have said, but more of what they haven't said and what they have hinted at in the press release? It boggles the mind...

One of the strangest and secretive places in the polar regions is Camp Century. It was a city under the ice, so to think that they don't have any places under the ice is just not so. There is nuclear powered cities, cities under the ice that can continue after an all out attack from any nations on the west?

The North Pole is a place of conspiracies and very, very secretive things. There is active conspiracies happening and even politicians are visiting the place for information on active things that is going on right now?