Ancient India Was Definitely Visited By Aliens 👽 Here Is the Proof 👽

There's a cave in India and many places also but this one cave has experts speculating that Ancient Aliens visited India and the proof of this is in the cave paintings depicting Aliens and UFOs. The proof is in the pudding as they say and this is one of them rare examples that the evidence is just as good as the local myths and legends as there's always truth to some of the myths and legends. The unusual cave paintings showing Aliens and obvious UFOs is spectacular because these are things not available at the time.They shouldn't be drawing or painting these things. Such things are of the future, right. They should not have the knowledge about Aliens full stop let alone painting blooming UFOs. It begs to be extensively researched.

Ancient India was the epicenter of Alien activity for a long time and It's been recorded in Indian caves (the ancient libraries) not for future peoples as evidence but for the people right then. It was a time to remember, to never forget. But why?

Is it just because they were Alien or was it because they ere different? Columbus must of had a similar effect on the people of North America but I don't think they gave him and his men a similar welcoming party. Guy's we brought this to the attention of people a while ago now and since then people have picked it up and expanded on it which is awesome. We think that's good. Ancient people shouldn't know about UFOs. Ancient people shouldn't be painting UFOs on the cave walls or drawing Aliens. They should be primitive. They should be technologically backwards and definitely throwing stones and bow and arrows. But then you get this oddity of nature that comes along and "injects" images of the future in to the human species. The seed is palnted and now they leave and leave us wondering. That festers and manifests in to today's people. Explain to me how someone could of even "out of nowhere" paint a UFO on a wall. Antenas, landing feet and circular with blooming lights! It's got a window aswell. 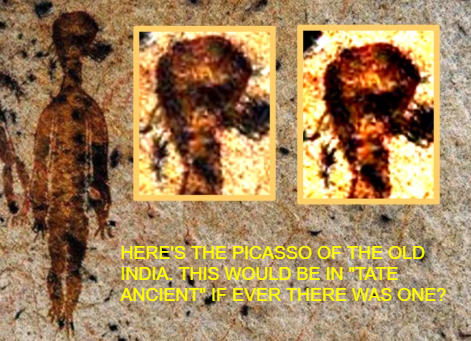 Where the hell did that come from, i'll tell you where THAT came from. Aliens. Just showing up and revealing themselves is enough to change/direct the course of a species future. You cannot undo what you see and that's what is shaping the ancient people's thoughts. Their imagination was opened and revealed to them way earlier than it should of and that is enough to trigger the future. By awaking our imagination of the what if we do this, or what about if we combine this etc etc and then that gives way for today.

Aliens shaped what we are today.

These cave paintings were a planned, deliberate and specific recording of the time Aliens came to earth and it was a culture changing - momentous time. When otherworldly beings came to earth (India) and set the world alight with obvious mind blowing information (given through yes you guessed it paintings as symbols and how they communicated.


Knowing that "we're actually not alone" must have had an effect on the people?

Imagine that! Just to see what is for them probably is a God or a Deity, descending down from the heavens and opening their spaceship doors wearing technology in the form of spacesuits the likes have never been seen or even imagined before therefore that changed our thinking which in turn changed everything. The heavens only reveals itself when it is time. Was it time for us to know? Before this time we didn't know of Aliens. The concept had never been in anyone's mind. 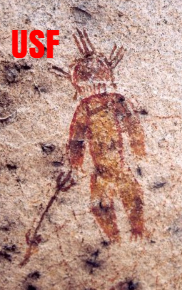 Even though we've (people now) come so far, we still haven't got the spaceship that can cut through the low Earth atmosphere and descend to the ground, hover and even fly around like a normal plane. Though were getting close, it's still not possible yet I don't think but who knows what is out there?


No wonder the ancient's recorded this event in their cave paintings and depictions of unusual and "different" to the everyday "normal depictions and drawings" that they did. Aliens exist and they must of got here on yes you guessed it, a sky chariot or Virmana as the people of the ancient times back then called it?

What to call these visitors, it must of been a case of "what fits our understanding of them but at that time"? So they depicted them in familiar poses, familiar chariots and only the Aliens clothing was changed (clothing albeit more like suits) but with different things like head gear, backpacks, pipes and visors also. The subtle differences which separates the ancient people of Earth from the extraterrestrials but in a way of understanding what they are and who they are? A bit like knowing how to spot a Picasso or a rembrandt from a distance. There's a theme and that theme is different for different peoples right around the world, but they ALL have one species with one thing in common! The headsets, the flying machines, the powers, the ability to communicate with each other silently (we've got that now, look it up). Here's some of the main pieces of evidence for you to ponder this Sunday, today. 👁‍🗨 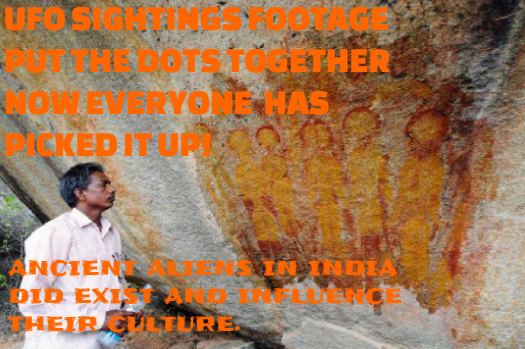 India, the land of a gloriously rich tradition might be once the hottest hub of aliens and extraterrestrial beings. Many historians and archeologists in India believe that cavemen who lived in the prehistoric age have painted pictures of aliens and UFOs in rocks at Charama, Chhattisgarh.💫 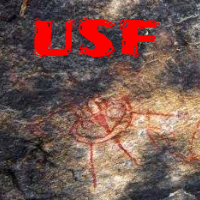 Charama - Chhattisgarh state department of archaeology and culture have plans to seek help from Nasa and Isro for research on some 10,000-year-old rock paintings that are possibly depicting aliens and UFOs in the Charama region in Kanker district in the tribal Bastar region. According to archaeologist JR Bhagat, these paintings have depicted aliens like those shown in Hollywood and Bollywood flicks. Located about 130km from Raipur, the caves come under village Chandeli and Gotitola.

JR Bhagat has been referenced as saying:
These paintings are 10,000 years old. Without seeing such creatures or beings (ancient Indian people), no one could have carved such things like this. The cave paintings "exactly match" what we see depicted as Aliens in modern-day science fiction themed movies and TV shows but not only in Hollywood but also Bollywood movies have very similar looking Alien beings."


Is it a coincidence or is it the human subconsciousness working in ways that we might never understand or just yet and working together as one entity together? I think that if the human body is capable of this (if true) then the past still might be revealed to us and not just a part of history or lost to history so to speak?

As a collective, as a species we're connected but as yet it is only known to the few. As a collective consciousness who knows what could be tapped in to? The eye's are the windows to the soul, we can't turn off sight by command therefore if you believe that everything is been recorded then who knows, the Minority report might not just be a science fiction movie!

There might be ways as yet to be uncovered or discovered that will allow us to tap in to this pool of data? I mean who would've thought that silicon is just sand and that every computer or the future is stored in a grain of sand so to speak yet again? I see a world on a grain of sand. That's the jist of that saying, and it's true.

“The findings suggest that humans in prehistoric times may have seen or imagined beings from other planets which still create curiosity among people and researchers. Extensive research is needed for further findings. Chhattisgarh presently doesn’t have any such expert who could give clarity on the subject,”There are several beliefs among locals in these villages. While few worship the paintings, others narrate stories they have heard from ancestors about “rohela people” the small sized ones who used to land from the sky in a round shaped flying object (UFO) and take away one or two persons of the village and who never returned.

Source of information Silent Circle. Also we sourced information from The Times Of India.