5 (FIVE) Alien mummified bodies have been found in Peru. It's out of this world. Carbon dating tests have shown that the bones inside the "beings" to be around 1,700 years old. They have claimed carbon-dating samples of the body dates them between 245 to 410 AD, however, the results have not been independently verified as true.

If confirmed, the discovery would change world history and support a popular conspiracy theory that "ancient aliens" visited our ancestors and helped them build major historic sites such as the ancient pyramids, and Stonehenge. Talk about exciting times that we are living in, that's an understatement indeed of epic proportions.

Then we did an update to the first video and that seem's to of taken off more than the actual first video which is very strange in itself?

This is an update of the Nazca, Peru Alien family that was found earlier on in this year 2017. This is an epic update because it validates the early news report that we did on this and guess what, we was right! This is an DNA proven real Alien type family. The chemical analysis has proven this to be real and not a hoax which we are pumped about because all the work put in by the scientists has been validated so we take our hat's off to them and their diligent works, well done guys.

Not only did we want it to be real but we also wanted it to be identified and this has done just that! This is a piece from the online news article we quoted; DNA testing on a body that was discovered has revealed that the body is a species that is unlike anything to have been found so far. In June 2017 a mummy was found in Nazca in Peru that showed signs of it being a species that have never been seen before. Now new bodies have been revealed and they are just as interesting.

Just look at this image below? It is so strange and very unusual looking! 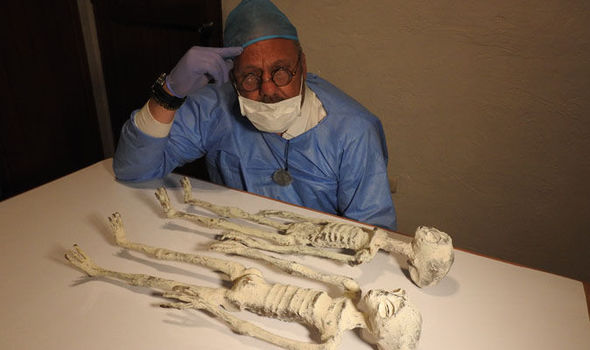