Huge Sphere in space Looks like The Star Wars

In space is a huge UFO sphere that was caught on NASA's own Live TV Feed. they must of realized what they had let slip and suddenly they put it "out of action" for want of a better name for it? It is so silly, playing this game with the public who saw it serves no real purpose or they keep on showing it and wait until so many views and the pull the plug so that a debate, conversation starts with the people who saw it versus the people who did not see it? It makes no sense.

Huge Sphere in space Looks like The Star Wars - NASA Live Feed Again! Ancient history as we know it wrong, it has to be wrong because they've literally left out all the juicy parts!

I'm talking about ancient Aliens, ancient flying machines and technology that would be priceless in today's world.

Skyscrapers would be erected in a day. Inventions would be rendered by A.I software inside of a fully functioning robot hybrid that look's exactly like a human being. the only difference would not be the "plugging in" of wires because as we already in use today there's the wireless charging ports.

Here's a strange and nutty fact for you...

The Olympic flag's colors are always red, black, blue, green and yellow rings on a field of white. This is because at least one of those colors appears on the flag of every nation on the planet.


If you can believe it, you can do it, it is based in common sense.

A vimana is a word with several meanings ranging from temple or palace to mythological flying machines described in Sanskrit epics. References to these flying machines are commonplace in ancient Indian texts, even describing their use in warfare. Vimāna is a term used to describe mythological flying palaces or chariots described in Hindu texts and Sanskrit epics.

The Pushpaka Vimana of the king Ravana (which was taken from Lord Kubera, and returned to him by Rama) is the most quoted example of a vimana. Vimanas are also mentioned in Jain texts. All of history is not what you think it is and that is based on previous discoveries and solid proof. Disclosure has to come soon, it has to.

The image just below is what NASA Live TV was showing at 13:17pm on the 28th June 2018 when I went back to look at the bizarre "object" again. But yeah, I was greeted by an unimaginably frustrating and very tiring scene. The good old faithful, NASA bail out image! This thing need's delivering to space (carefully worded) it is not a good image - is it! 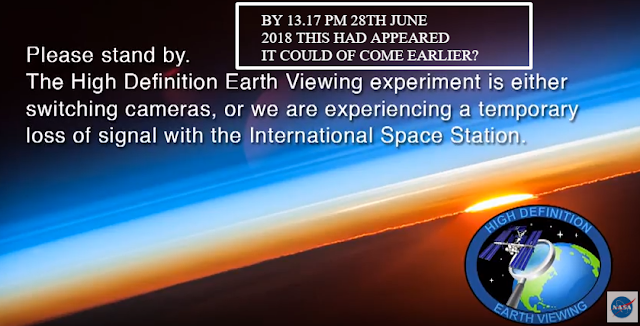 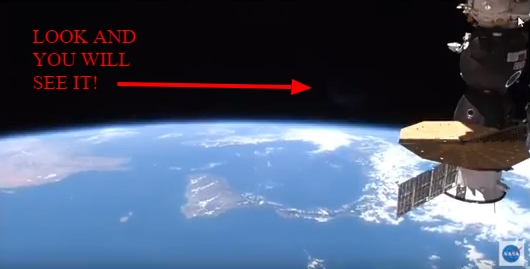