Interactive map shows if you're drinking radioactive water, in the United States!

There is contaminated water in lot's of parts of the world but this report about Radium been found in the water or drinking supply in the US is very worrying indeed? Here is an interactive map of the hot spots around the US where the most contamination can be found? We supply a link so the public can go check out their own areas by putting in their postcodes and seeing the results? It's oil and gas drilling which causes the most worrying results!

If your worried about drinking radioactive water then don't, your very safe because they wouldn't allow you to drink it if it was really dangerous, would they?

Anyone living in the United States might be shocked to find out that an investigation has revealed that more than half of the water that residents drink has radioactive elements in it.

The EWG, also known as the Environmental Working Group found that a large portion of the drinking water in the 50 states has radioactive elements and this is increasing the risk of cancer to the public. The EWG analysed 50,000 public water systems and found that the water that more than 170 million people in the US drink have radioactive elements. In 27 of the states, the water supplies exceeded the legal limits of the EPA.

One of the most common of radioactive elements that were found by the EWG was radium. This is a substance that enters the water in the ground naturally through the deposits that are in the crust of the Earth. The levels are higher when any activities such as oil gas drilling are disturbed by the rock and soil deposits. If this happens ions are released, and this is known as ionisation. Ionised radiation is categorised by the EPA as carcinogenic and safe levels are set, and these can then be enforced. 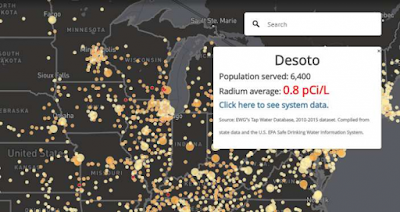 Levels Of Radium Are Above Legal Limits In 158 Public Water Systems.

276, 000 people in the US used 158 public water systems, and the EWG found that radium levels are above the legal limits. The guidelines of the EPA are not as stringent as they might be. State scientists in California in 2006 set some public health goals for radiation that are stricter in response to an elevated risk of cancer that was posed by radiation and potential harm to fetuses during pregnancy. The guidelines are many times stricter than the EPA standards set out.

If the standards in California are stuck to this would mean that no more than one case of cancer for every million people would be down to the water supply. The levels of the EPA allow for 70 cases for each 1 million people. A study that was conducted between 2010 and 2015 found out that 122 million people drink water with radium levels that are above what is thought to be safe by the guidelines of the scientists from California. The EWG has said that the levels of radiation in the water in the United States might harm those drinking it.
Our source of information can be found here.

Millions Of US Are Drinking Water That Might Be Harmful.

Radioactive elements in tap water come from sources that are natural. However, this does not take from the need to be able to provide protection to people through standards that are stronger, including having water treatment that is better. The senior science adviser at EWG, Olga Naidenko, said that millions of people in the US are drinking water that could contain radioactive elements that are harmful; however, thanks to federal standards that are out of date, many people have no idea about risks they are faced when they drink water from the tap. 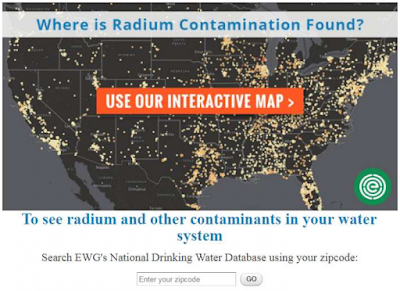 Texas was the region where radium had been found most in drinking water, and about 80% of residents were said to have radium in their water supply. The EWG had an interactive map that contains data, allowing people to search for radium levels in the water based on zip code. If you are unsure whether there are radioactive elements in the water supply where you live, check out the map.