Las Vegas black sky droplets came to light not ling ago and omg these horrible stuff things become a disgusting nuisance for one guy. They look awful.

That's right, I've written "gross" in the title because it's something that this eye witness was actually starting to see in food, and on his cars which is either gross and is wrong on pretty much everything outside of his home and yes, that's not cool, it's gross.

Who knows what this horrible goo is? It could be leftover after chemtrail planes which have shot their disgusting load out of the back of a plane. So that's disgusting because we're not aware of what it is, bit if it was good, believe me we'd be all aware of what it is because although we think we know whats coming out of the nozzle (antidepressants, puppet master drugs) or whatever else you might be thinking of, it realy could be a next level "chemical engineering program of which we've not caught up with!" We probably think we know, but we don't.
Even KTNV reached out to all the usual agencies as you'll hear in this really compelling "original video" which to be honest with you guys, all this talking about an anunsual and unknown substance is falling right now somewhere else in the world, out of the sky. It gets me thinking about. It's been falling for days. Credit: KNTV (News)/Secureteam10 YouTube Channel/UFO Sighting's Footage/UFO News/Canva.
This specific incident happened 4 to 5 days ago, I'd rather be anywhere else other than the Las Vegas area for real. Look, self preservation is number 1 on anyone's schedule. It doesn't matter if your a human being, an Alpaca, a Cow or a Rattlesnake but coming across this black goo probably isn't the best scenario. 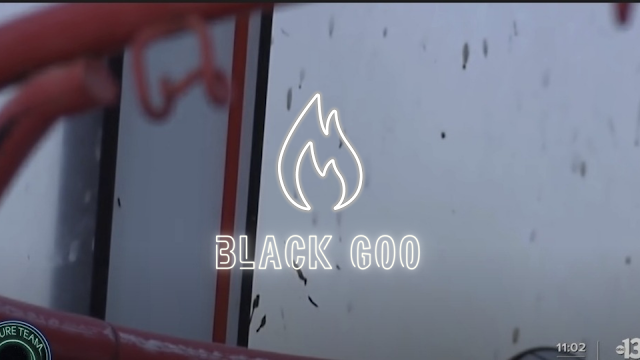 Credit: KNTV (News)/Secureteam10 YouTube Channel/UFO Sighting's Footage/UFO News/Canva.
This isn't good. It's like the Indian red blood cell rain - all over again but this time the colour is black. It looks, it feels like oil, it must not smell like anything that we would recognize?
This goo, grease, oil droplets or black rain or whatever you have called this most unusual discoloration of rain, but one thing that I will tell you guys is that it's most certainly not a good thing. It cannot be good, its come into the world as if it's under the radar. New material gets it's name from analysis of it's behavior, of it's properties, and this is trying to get in but under the radar. It's acting slightly underhanded - but that's only if your trying to give this an actual name?
Why do you think human beings are called human beings? Why do you think a snake is called a snake? Why is a snail, called s snail? A being is called according to it's unique "behavior". This black goo, what should we call it? Here's an awesome opportunity guys to possibly give a new entity a name...
Related post
NASA ISS Live TV Feed Records Probably The Most Unbelievable UFO Sighting Ever
This horrifying blackish brown goo covered a valley near Charleston and Hollywood. These droplets are like grease to the touch which is how the local news tv station is putting it? Guys, do not under any circumstances touch this! It's an absolute unknown entity, it's an anomaly and if it's military or top secret, then you need to leave the state!
You must not touch it, ring it in as a spillage of unknown substance. The authories will have to deal with it. We literally don't know what the "Hell" it is. Please, see it, but leave it. Call it in as an unknown substance possibly a spillage. I'm not on your continent, but your my friend's and I value life above all else. It could be a by-product from a nefarious action, it could be an accumulation of fluid in the atmosphere from chemtrails? You've got nothing to benefit, but could lose everything, don't take the chance. Plus it's blooming gross!

"Life is precious, friends are hard won, family is constant but the unknown substance stays put, till we know what it is"

What's going through your mind when your just about to tuck into a nice sandwich or a cooked meal that your wonderful spouse has prepared for you, only for some disgusting black droplets to be greeting you at every single bite? Nah, that's "gross" infact it's down right disgusting in every language on this seemingly stranger by the day planet! Seriously - for real, what is going on with this insane planet? I normally would ask for answers on a postcard but I genuinely don't know if I'd even get them...
Controversial topics receive controversial answers!
Im not an alarmist or a drama queen, I'm definitely not a drama queen but im a realist, copyright lyrics by me!
These black disgusting droplets 💦 of filth could be Alien seeding, a Teraforming idea from some far off distant planet which means well? It could even be the human race seeding our own planet in anticipation of a catastrophic event which was supposed to have ravaged this planet by now... Covid?
It could be a backlash from chemtrails, it could even be a side program that nobody else knows about, right or the likes which aren't gonna be known for a hundred years from? Guy's, there's to many examples of goo falling out of the sky, red blood cells in India, white basic fluff in the US, blue purple strange material in Europe and the rest of the world, i don't even wanna know what has stepped out of the sky! The sky and God knows what else is going to be coming should definitely be monitored because we have the strength, the money, the manpower and the space engineers whom have already put many spacecraft into low Earth orbit?

And yes, your absolutely correct when you think I don't have time to mention all the strange debris falling out of the sky. From Sweden yo India and China to the UK! Strange looking elements of goo, fish, birds in their thousands have literally been falling right out of the sky for no reason at all.
But black goo droplets are a totally different kettle of fish. We're talking about biological who knows what, biological changers, biological entities that was not on the list of natire. Stuff that was added after the fact. That ain't a good thing, that's added from the void i.e space. Unless it's absolute
Here's the epic story of the sickening black sky goo:
Here's the brilliant video uploaded to YouTube by Secureteam10:
Please like and share this post with anyone else who might appreciate it, cheers.
Credit: KNTV (News)/Secureteam10 YouTube Channel/UFO Sighting's Footage/UFO News/Canva.